The Page Sand Devils softball team won a doubleheader against the Alchesay Falcons Saturday, winning the first game 24-3 and the second 10-0. 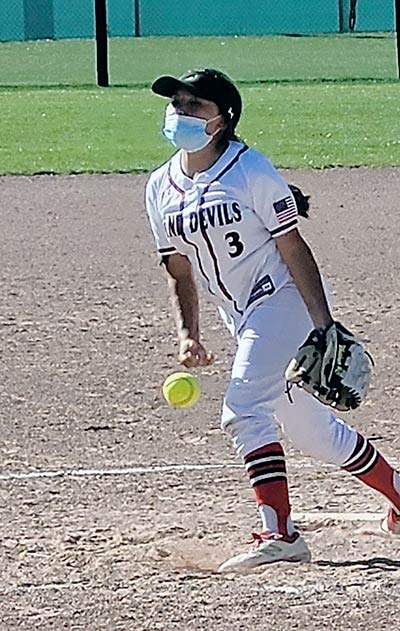 In the first inning of game one, Alchesay was able to get some members onto the plates before being tagged out by Page’s defense. When it was the Sand Devils’ turn at bat their players hit high balls that often landed in the outfield. Victoria Clark and Tessa Cummings were on third and second base respectively when Brianna Smallcanyon hit her ball deep into the right outfield. She ran all the way to second while Clark and Cummings ran home together, scoring the first points of the game, 2-0. Later Smallcanyon stole home and Janelle Etsitty would score the final point of the inning, making it 4-0.

The second inning was Page’s time. Pitcher Kylee Sam quickly struck out three Falcons and switched to offense. There in the bottom of the second, Page pulled ahead.

Page once again started hitting high and deep balls, allowing them to run the bases. Not long afterward the bases were loaded and slowly rotated with each player while Alchesay worked to tag out the Sand Devils. By the time the Falcons were able to catch three of the softballs, the score was 14-0. Smallcanyon, Cummings, Clark, and Keiliah Whitehair ran home, while Serenity Lamone stole home. Anastasia Christiansen and Etsitty batted and ran home twice.

In the third, the Sand Devils’ defense prevented the Falcons from taking a base. However, in the next inning, Alchesay showed some more unity as the defense was able to catch some high balls, but Sand Devils Miakoda Whitehorse and Grace Jump were still able to make it home.

In the fourth inning, Alchesay was able to make some advancements. The Falcons became more focused, none of them were struck out and they slowly started taking the bases. Cori Cosay was on first base when Tenille Gregg step up to the plate and hit her ball deep into right field. Seizing the moment, Cosay sprinted around the diamond and safely made it home, scoring the first point for the Falcons. Gregg would later join her, running home and making the score 16-2.

The Sand Devils took the bat and again scored a lot of points, making it 24-2. Lamone, Kamya June, Jump, Christiansen, and Whitehorse scored in this round while Cummings stole home.

The fifth inning was the last of the game. The Falcons again did not allow themselves to be struck out. Sierra Lister made a brave run to third when she sent her ball high into left field. During the next play, she made it home and brought the score up 24-3. The game was called after the last Falcon was tagged.

Despite the high scores, both teams still had fun and showed good sportsmanship. Instead of letting the point spread bring them down, the Falcons used it as motivation to get better and whenever they got a chance to run to first base, they’d sprint to second instead, taking a mile when given an inch.

“We did well with our hitting,” said Alchesay’s pitcher Leilani Lister. “Everyone made contact with the ball and we all were talking out there. It was really good.”

“It was pretty fun. Normally we start hot and keep that energy up throughout the whole game,” Etsitty said.

Alchesay coach Briana Enfield is happy that her young team didn’t give up and that they’re learning from their experiences.

“What happened today when we went in is that we had fun,” Enfield said. “A lot of times we struggle with the mental game, and today our mental game was there. I’m most proud of our mental game and never giving up and being resilient to being down and just building … We built for the last three years and we’re used to building from the bottom.”

In the second game, Page switched out their pitcher with Keiliah Whitehair starting off the game. The Falcons were able to take some hits but weren’t able to make any scores. When it was Page’s turn to bat, Yecenia Mouser pitched for Alchesay. Cummings walked to first base, but she stole second, ran to third during the next play, and when the catcher had her back turned, stole home and made the first point for Page. Whitehorse would also steal home while Clark and Etsitty ran home, making the score 4-0.

In the second inning, Alchesay was tagged out before making any points. When they switched over, the Falcons were able to tag two Sand Devils and caught Cummings in a pickle between third and home base until the catcher tagged her. Clark made one point before the end of the game.

In the third inning, Alchesay started to lose steam as two players were struck out while the third was tagged at first base. When they went on the defense, the Falcons had trouble holding onto the ball as Sam and Lamone scored, but Alchesay kept them from becoming overconfident as they tagged a Sand Devil running to second and caught two incoming balls.

In the fourth inning, the Falcons didn’t score but neither did Page. Alchesay tagged out two Sand Devils attempting to steal. At second base, the Falcon defender caught the ball that was thrown her way so she could tag out Calena Miller when the glove slipped off her hand. Miller tried to run for second, but the baseman grabbed the glove (ball still held within) and tagged Miller with officials calling it an out.

The Falcon hitters didn’t have any luck in the fifth inning either as they were tagged out. When it was Page’s turn, Sam and June were able to score points before Alchesay tagged out three of their players. The game was called after the Sand Devils’ play with the final score of 10-0.

Once again, the girls showed good sportsmanship as they tipped their hats to one another and cheered one another’s efforts.

“I feel like our energy was just really good today and we just kept our spirits high the whole time,” Janelle Etsitty said. “Normally if someone gets down the whole team goes down — it’s like the old saying, one bad apple and the whole basket is done. So, to avoid that, I try to keep my team energized, talk to them, cheer a lot and keep them going so it’s pretty fun.”

Sand Devils coach Sunni Crank was proud of her girls and of her two pitchers, freshman Kylee Sam who pitched the first game, and sophomore Keiliah Whitehair who pitched in the second. Crank credited them for playing a big part in winning the day.

“I say we are doing good; we could definitely be doing better especially with the two games we had yesterday where we were challenged. We have a lot of work still to do and still some regional games to play so we put in the work and hopefully during the games, we’ll reap the rewards,” Crank said.

Leilani Lister agreed, noting that even though Alchesay still has room for improvement, it wasn’t a bad day for them.

“I like how my team has more confidence now. We’re working on it and every game that we play, and as we continue playing, we’re enjoying whatever games we have left and I’m confident we’ll be doing better.”

Both girls expressed that the only downside today was the COVID-19 precautions. Both teams have been affected heavily by the pandemic with missing players, new faces, and new rules to follow like wearing a mask while playing and being unable to huddle in a large group. Regardless, they are happy to have the chance to play this year.

“I just want to say I’m proud of Alchesay for staying resilient, for bouncing back and thankful that our school board gave us the opportunity to play this season,” said Coach Enfield. “We weren’t sure until the very last minute so I’m just very grateful that we’re out here, had our chance and we knew this year was going to be a struggle and so every single game we go in with our heads held high and work better than we did in the last game.”