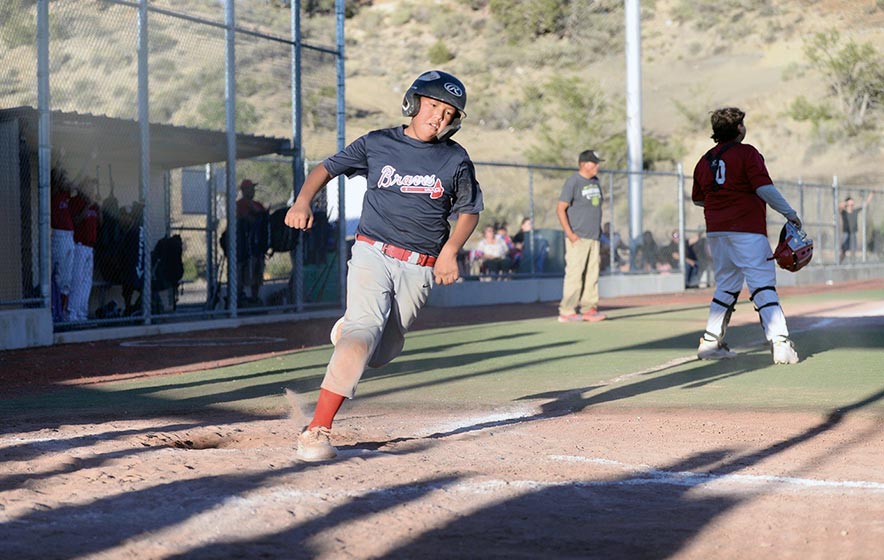 Special to the Times | Ravonelle Yazzie
Braves’ Cody Dooley scores against the Angels on June 28 at Ford Canyon Park during the Gallup Amateur Baseball Softball Association in the Pee Wee Reese Baseball league.

The sounds of baseball are what Sean Lewis enjoys the most.

Lewis is one of nine head coaches in the Mickey Mantle division of the Gallup Amateur Baseball Softball Association.

The league saw some of its number increase this summer after a huge drop last year due to the pandemic.

“It’s actually better this year,” Lewis said. “A whole bunch of kids came out, and now that COVID has subsided, it seems like everyone wants to come out and play ball.” 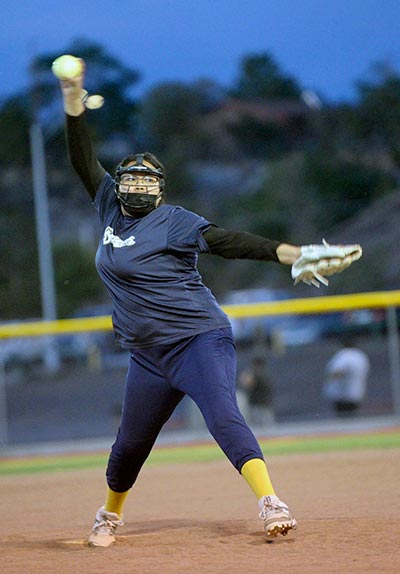 Special to the Times | Ravonelle Yazzie
Marlins pitcher Logan Benalie winds the ball up to throw a pitch to a Brewers hitter on Tuesday night at the Gallup Amateur Baseball Softball Association 13UP Fast Pitch Softball game.

Lewis said this year’s numbers are even better than before COVID.

Lewis said the pandemic was not good for everyone as it paused everything from indoor to outdoor sports.

“They shut us down completely,” he said. “A lot of people missed it, and now look at Ford Canyon Park.

“Everyone is hustling and bustling,” he said. “When COVID hit this place, it was shut down, and now this place is packed with people every day, so it’s nice.”

Like the Mickey Mantle division, the girls’ 13-18U Fastpitch Softball league has also seen a jump in numbers.

“With COVID, there was hardly anything last year,” Yankees coach Levi Saucedo said. “There were some ball, but there wasn’t that many kids.”

Saucedo said it’s nice to have a complete set of games as the league features seven softball teams in the older kids’ division.

On Tuesday night, the Saucedo-coached team took sole possession of first place with a 6-1 win over the Royals as both clubs came into the game with one loss apiece.

“This was a really big night for us,” he said. “You know, the last time we played them, we had a bad night. We lost by four points, and it was the errors we made.”

Saucedo said his club played with a different mindset, and it helped them limit their errors.

“We talked about having fun tonight,” he said. “If the girls keep playing like this, we’ll be the team to beat.”

With the season winding up on July 19, Saucedo hopes to persuade the league’s board members to have an end-of-season league tournament.

“I think that would be very good for the girls because it would give them an incentive to keep working hard,” he said.

Saucedo is afraid that some of his girls will stop showing up for practice without a tournament.

“I’m keeping my fingers crossed, and hopefully, we’ll get a tournament, so these girls will have something to look forward to,” he said.

As the plant manager at Rhino Health in Church Rock, New Mexico, Saucedo said he’s lucky to have a company that allows him to dedicate his time to the girls he coaches.

He has 14 girls on his roster, and Tony Enriquez and Kim Saucedo assist him.

“I got a few that play travel ball, but they’re committed to this team,” Saucedo said.

Lewis also has a few league players that play on a traveling team. Some of them are on his 14U team, the 643 Militia squad.

“Our traveling team plays for other baseball teams in the city league, but when we travel ball, we all come together,” he said.

The Militia team plays in the AAA division of the USSSA (United States Specialty Sports Association). Lewis says they award gold, silver, and bronze rings at these sanctioned tournaments.

“We’ve won eight gold rings with the same kids,” he said. “They’ve been playing with my since they were 8 years old, so I’ve had them for four, five years now.”

This weekend the Militias are headed to Las Cruces to contend for a state title in the 14U age group.

“We want to win state and hopefully go to the World Series,” he said. “The experience they get is what matters.”

And although most kids in the city league are not on a traveling team, Lewis said it’s a chance for them to learn baseball.

“It’s an introduction to the sport, and if they want to pursue the game, there are opportunities,” he said. “They’re opportunities for them to play at the high school level.”

Mets player Derek Martinez is hoping to be one of those players as he set to start his sophomore year at Window Rock High School.

On Tuesday, Martinez pitched one inning as the Mets overpowered the Reds with a 12-0 shutout. The two teams met earlier this year, with the Reds winning.

“Tonight was a pretty good win because the last time we played these guys, they beat us by seven, eight points,” Lewis said. “Coming out tonight, we felt like we needed to make a statement and make sure we put it to them.”

The Mets coach said their pitching was on point.

“We had a lot of good pitching from Keanu Johnson,” Lewis said. “He pitched good, and my backups came behind him and threw strikes.”

“Our pitcher can punch them out,” Martinez said of Johnson. “He can basically pitch a no-hitter, and the defense behind him was good.”