Two brothers competed at the 2022 Arizona State Jiu-Jitsu Championship on June 25 and came in 3rd place in their respective categories. 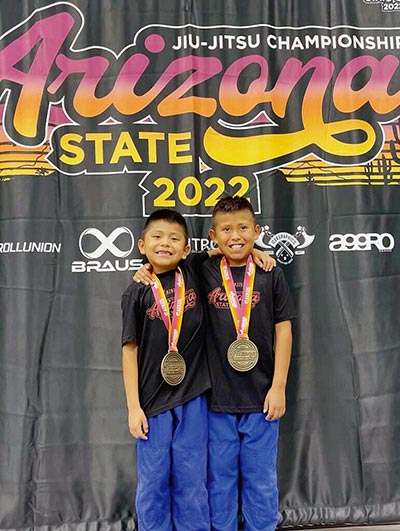 Courtesy Photo | Kirk Tsosie
Brothers Aayden and Andrew Redshirt competed at the 2022 Arizona State Jiu Jitsu Championship where they both won bronze in their respective categories.

The brothers, Andrew Redshirt, 7, and Aayden Redshirt, 9, said their time at the tournament was fun.

Aayden said his final opponent was tough. Still, it was a good time, and when he was given his bronze medal, he said it was “awesome.”

Andrew likewise enjoys learning jiu-jitsu and traveling to tournaments. He likes making submissions, learning the sport, and winning awards like the bronze. What he enjoys about the sport is “working hard and trying my best.”

Their father, Kirk Tsosie, served in the U.S. Marine Corps, during which he learned martial arts. As a wrestler in high school, he appreciated the sport, and after serving, he joined a jiu-jitsu school and competed.

Later he saw the boys were interested in the sport too and decided to sign them up so they could try it.

“I told them, ‘You don’t have to compete, and you don’t have to take it nowhere as long as you learn it, and it builds confidence. When you have confidence, you’re able to take care of yourself, and you’re willing to do more things,’” Kirk said. “So that’s the only reason why I got them into it. Surprisingly, they both really enjoy it, so very blessed with that.”

Kirk’s teacher, coach Issa Able, was a good mentor, and they became friends. Years later, Able would be coaching Kirk’s sons and teaching them the conduct of martial arts.

Able always stresses that jiu-jitsu can be dangerous if not properly taught and supervised, and it also takes dedication to learn and improve those skills. The brothers, though, have shown an interest in the sport and like taking part in the sport. They have been training with Able for about five years now collectively.

Kirk said the sport kept the boys driven, helped them make friends, and kept them busy and active. During tournaments, he could see when the stress is on the brothers they become focused and have a no quit attitude. He believes the sport enhances that attitude and is helping them become more robust, disciplined, and consistent.

So far, they have only met one Navajo who did jiu-jitsu some years ago and rarely saw other natives. On occasion, they’ll compete against a few Apache kids at competitions where they’ll face opponents from the southwest.

Able is a world champion jiu-jitsu fighter and instructor and is described as a dedicated family man and teacher.

The brothers had learned to be articulate, focused, and dedicated in their time. Able teaches the importance of responsibility and stresses jiu-jitsu should only be used in self-defense. He also makes a great effort to be there for all his students, to be encouraging, and has shown great patience with the children.

When the pandemic began, it interrupted the brother’s training a little. They had wrestling mats at home and continued training with each other.

Able also sent his students to exercise videos during the lockdowns. When the restrictions were lifted, he ensured their dojo was sanitized and safe every time his students came in.

The brother’s mother is Norlena Tsosie, who believes the sport benefits the boys. She feels like many kids today don’t have structure, but martial arts have given her sons something to focus on and build on.

She describes their eldest, Aayden, as very observant and intelligent; he is currently learning sign language. He shows a deeper understanding of things and seems mature for his age.

Her youngest son Andrew is talkative, funny, and always looking to be helpful.

They both show a lot of hustles and are on the top list at their school, and she feels like they are growing to be productive young men that could be helped by their time in jiu-jitsu.

She and Kirk believe martial arts can be helpful to other people on the rez in learning to be organized, disciplined, and defend themselves. As of now, though, there are no martial arts centers on the rez, with the closest one being in Page.

The family always tries to make a weekend trip from their home in Phoenix to Coalmine, Arizona, and teach the boys about their roots. They visit their extended families, learn some Navajo words, and the boys would occasionally have their favorite food; Aayden loves mutton while Andrew prefers frybread.

And in turn, the families will follow the boys to a tournament whenever they can and cheer them on from the sidelines.

The boys continue to show an interest in martial arts, and their parents will continue showing their support for as long as the boys are involved. They stress that this is the boy’s choice; if they want to go and try another sport or activity, they will support their sons’ decision 100%.