Santa Fe Indian looks to reload for next season 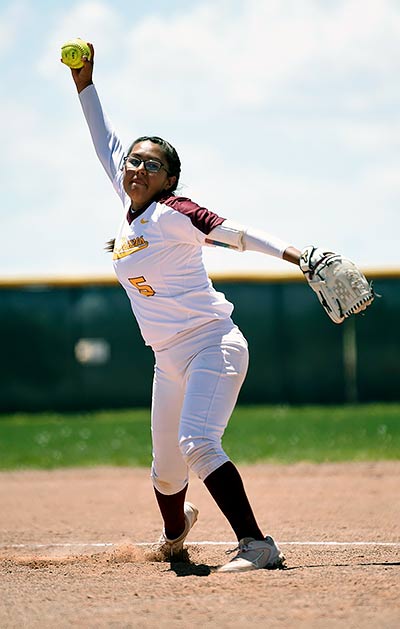 Lady Brave Alyssa Naranjo winds the ball up for a pitch last Wednesday at Cleveland High School during the New Mexico Class 3A state softball tournament.

The two teams that played for the New Mexico Class 3A state softball finals last week had one thing in common.

They both escaped with a pair of one-run wins over the Santa Fe Indian School Lady Braves last week at Cleveland High School on May 15.

Santa Fe Indian dropped a 1-0 decision to No. 3 Tularosa in the second round of the tournament that sent them into the elimination bracket.

Following that loss, the Braves could not hold onto a 5-1 lead going into the bottom of the sixth as No. 2 seed Cobre escaped with a 6-5 win, ending the Braves season at 16-13 overall.

Cobre, the eventual state champions, lost its second round game to Dexter sending them to the elimination portion of the bracket.

“It all starts from the first game,” Santa Fe Indian coach Oliver Torres said. “The better team didn’t win. We had some nice clean hits and they just happened to score a run and we didn’t.”

Despite playing great defense, Torres said it was hard to lose that game to Tularosa, knowing that they would have a long day ahead of them to reach the finals.

“We played better than them, we hit the ball better than them and we played good defense,” he said. “They just got that one run scored on a wild pitch. That is how they beat us.”