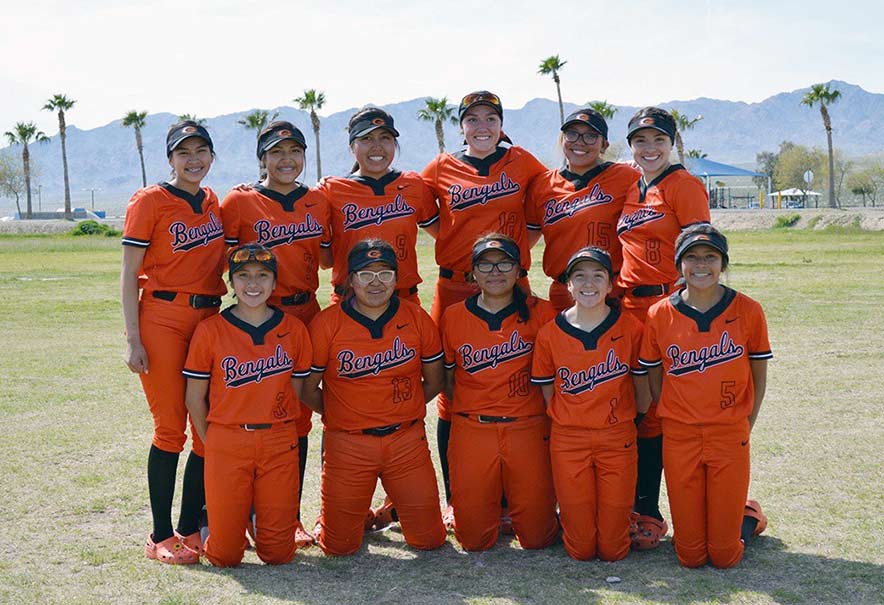 Submitted
The Gallup softball team poses for a picture after competing at the Tournament of Champions in Bullhead City, Arizona on Mar. 7. The Lady Bengals haven’t played a game since that tournament as they await the fate of their season due to the COVID-19 epidemic.

Like most high school teams across the country the Gallup softball team is looking forward to starting the season again.

Of course, that depends on the trajectory of the COVID-19 epidemic. Earlier this month, the New Mexico Activities Association suspended all spring activities and sports until further notice, including practices.

The decision to suspend all spring activities and sports is “based on the evolving COVID-19 public health threat and the Public Education Department’s announcement that schools will be closed for three weeks,” the press release stated on Mar. 17.

The NMAA said they would continue to monitor the situation with the governor’s office, New Mexico Public Education Department and the state’s health department. On April 1, the NMAA board of directors will meet via teleconference to further discuss the issue.

With no practices, Gallup coach Rayfert Spencer said his team is staying on top of things with individual workouts.

“We have group chats and every day I send them a practice schedule on what they need to do,” he said. “I have different workouts for our pitchers, catchers, infielders and outfielders.”

Spencer said it’s up to them to actually do the workouts but he’s pretty confident that they are doing what’s needed to stay in shape.

“I’m pretty sure they’re doing those stuff because they don’t want to lose out on this season,” he said.

With the novel coronavirus putting a halt to all high school sports, Spencer said his team was disappointed that they had to suspend their season.

“They’re upset, especially our seniors,” the Gallup coach said. “Our seniors really worked hard this past summer and fall. They put everything they had into the season so they’re bummed about our season being put on hold right now.

“Like everyone else we’re waiting for that call when they tell us the season is back on,” he added. “I think we have a good chance of winning our district and being ranked high in the state.”

Prior to the season being suspended the Lady Bengals played six games, including five in the Tournament of Champions in Bullhead City, Arizona on March 5-7.

At that tournament, Gallup went 1-4 playing against some top teams in Arizona, California and Nevada.

“We played some great teams and we competed,” Spencer said. “There were a couple of games that we should have won but we couldn’t hold onto our lead.”

The Gallup coach said his team saw some outstanding pitching with the game being played at a faster pace.

“There’s a reason why we went up there,” he said. “A lot of coaches recommend us going up there and playing in that tournament. Everything is fast so it was a great experience for the girls.”

Gallup would have played in its second and final tournament this week at the prestigious Kristen Griego Invitational, which is hosted by Rio Rancho High School.

If the season does continue, Gallup will play city rival Miyamura on Apr. 9 in a key District 1-4A matchup as the Lady Patriots own a 5-0 record, which includes wins over top 4A programs such as Bloomfield, Aztec, Silver and Los Lunas.

“That’s always a big game,” Spencer said. “It’s a rivalry game and anything can happen in games like that.”

And while the fate of this year’s spring season remains unclear, Spencer said he’s hoping to see his girls back on the field as Gallup returns all but three seniors from last year’s state playoff team. The Bengals finished last season’s record at 17-10 overall, which included a 15-13 loss to Portales in the state playoffs.

According to Spencer, that was the second year in a row the Bengals were ousted in the opening round.

“They were disappointed in losing that first-round game so they worked really hard over the summer,” he said. “We watched the video of our first-round game last year and we made it a goal to continue to work hard and try to get out of that first round.”

Of the 14 players on the squad, four are seniors and they include right fielder Raquel Tennison, catcher Robyn Pete, third baseman Megan Watchman and second catcher/outfielder Elisha Lee.

“The seniors put everything they had into this season and when they played against Grants and in the tournament at Bullhead City they really showed up,” Spencer said. “They did an outstanding job there.”

In addition to those seniors, the Gallup coach was real impressed with his two eighth-graders in shortstop/pitcher Seniah Haines and second baseman Brenna Becenti.

Spencer said Haines is currently battling for the top pitcher’s position while Becenti started out the season as a sub but after the Bullhead City tournament the Gallup coach said she’s be outfitted for the starting position at second base.

Spencer said his team is solid on both ends of the field but he’s put a huge emphasis on developing its pitching staff this year. Last season he utilized two pitchers in Katherine Lincoln and Makayla Denezpi but with the same type of pitching styles he said most teams figured out how to hit off of them.

In addition to Lincoln and Denezpi, the pitching staff also includes Hayes and Adrianna Lynn, who’s coming off an ACL injury.

“This year we changed things around,” he said. “Everyone has a different style of pitching such as rise ball, curveball and drop ball. They really worked hard during the offseason in pitching differently.”

Defensively, Spencer said they made some adjustments on how they can support their pitchers.

“We’ve worked a lot on lateral movements,” he said. “I think that was the weakest part of our team because 80 percent of the balls that were hit last year were hit between third and short. We worked hard on those movements to help cover those gaps.”