Yavapai’s Ulrich headed to Siena, leaving on a high note

Jocelyn Ulrich needed just one year to leave her mark on the Yavapai College softball program. 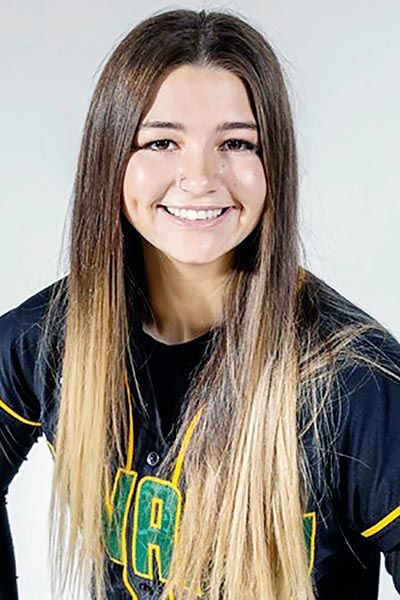 The Aztec High School graduate earned multiple superlative awards during the spring and now heads to Siena College in Loudonville, New York, to continue her schooling and playing career.

She will be a third baseman and catcher for Siena and will play before relatives on her father’s side.

“My aunt already has the whole plan for road games,” she said. “She’s so excited.”

The junior is coming off a season in which she was among 16 Division I players named to the National Junior College Athletic Association All-America first team.

“I thought I would at least be an All-American, but I didn’t think I would be first team,” said Ulrich, who did not play as a freshman for University of New Mexico before transferring to Yavapai.

She also was the Arizona Community College Athletic Conference Division I player of the year and an all-conference first-team selection. And she was cited on the all-NJCAA Division I Region I team.

In playing all 47 games, Ulrich led the Yavapai starters with a .482 batting average, a .957 slugging percentage and a .577 on-base percentage. She had a team-high 70 runs batted in and shared the lead with 17 home runs.

“It all came together,” she said. “I’m very good at staying in my zone. I don’t swing at pitches, I don’t think I can hit hard.”

She consistently made contact, striking out just 17 times in 139 at-bats. Her 34 walks gave her the best walk-strikeout ratio on the squad, for she was among four starters to walk more than strike out.

Her offensive pop was a reason Yavapai reached the national championship tournament, entering the field as the seventh seed. Named to the championship all-tournament team, she hit .474 with two home runs and nine RBIs in six games of the event.

Though Yavapai was eliminated by Grayson College, which lost in the title game, it upended No. 1 seed Salt Lake, No. 2 Butler and No. 5 Wallace State beforehand.

“None of us were really devastated,” she said about falling short in the postseason run. “It was a lot of emotion. Everyone played with so much heart every game.”

This season Ulrich played mostly third base but caught the second game of doubleheaders. She finished with a .967 fielding percentage in 180 chances.

“I hadn’t caught since junior year of high school,” she said. “I had to really get comfortable with it again. I think I did pretty good.”

This summer she is practicing two hours five days a week with her father, Gene Ulrich. She hits her father’s pitching for about an hour and does fielding and throwing drills at third and catcher the rest of the time. Other times she hits off a pitching machine.

She has been practicing throws from catcher to second base to prepare for when runners try to steal.

“I’m working on quicker throws at third base, a snap throw,” she said.