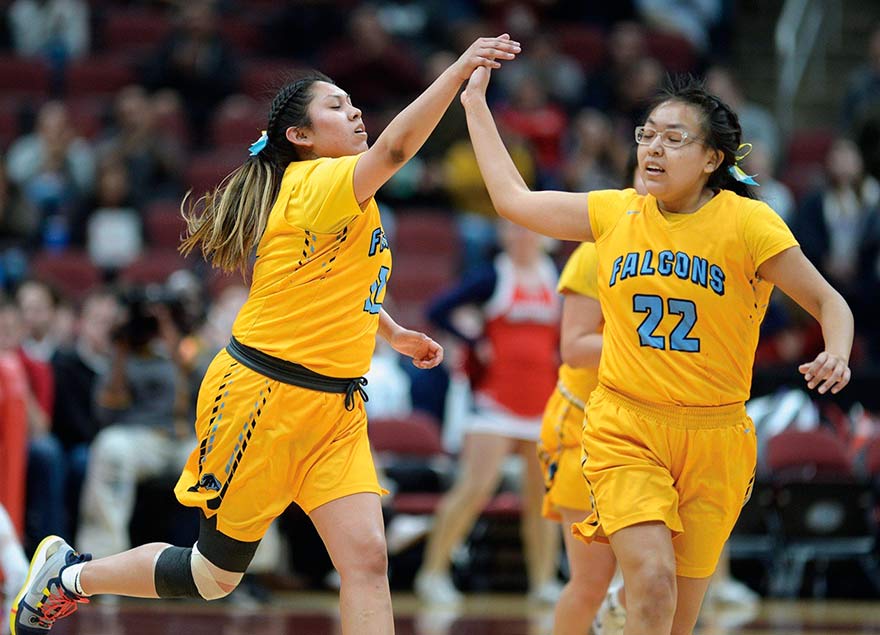 Navajo Times | Donovan Quintero
Alchesay Lady Falcon Devanie Cosay, left, and Laney Lupe (22) high-five one another during the championship game on Saturday at the Gila River Arena in Glendale, Arizona.

With the way the seedings came out in the Arizona 2A state bracket, not much was expected from the Alchesay girls’ basketball team.

Alchesay was seeded sixth in the tournament and they finished second in region play. But the Lady Falcons proved everyone wrong.

Alchesay captured the school’s second state title with a 40-36 win over No. 4 seed Scottsdale Christian Academy at the Gila River Arena in Glendale on Saturday night before a large crowd.

“The feeling is incredible,” Alchesay coach Rick Sanchez said. “We weren’t picked to win anything but the girls worked hard all year. I kind of pointed them in the right direction and they just ran with it to get this win.”

Alchesay junior guard Mariah Riley said winning the state title seemed impossible at the start of the state tournament three weeks ago. But after outlasting defending state champs Leading Edge Academy by a 49-45 count in the state quarterfinals she knew they could do it.

“This feels amazing because early on I never knew our team was capable of doing this,” she said. “But when we won our second game I started to believe in my team. We just fought for every point.”

Saturday’s win ended a 23-year state title drought for the Alchesay as the 1996 team finally won after two unsuccessful tries.

“As we got closer to the championship game that is what people talked about,” Riley said. “They were telling us it was our year to bring it home.”

After battling the SCA Lady Eagles in a tight contest, the Falcons closed out the last 39 seconds on a 6-2 run to with senior guard Laney Lupe jump-starting that rally with a trey that broke a 34-all stalemate.

The Eagles cut that margin down to 37-36 on a basket by senior Kylie Hearn but with less than 20 seconds left SCA was forced to foul.

That scheme nearly worked as Lupe missed the front end of a 1-and-1 bonus but on the ensuing play junior Denisia Massey stole the ball, giving Alchesay another possession.