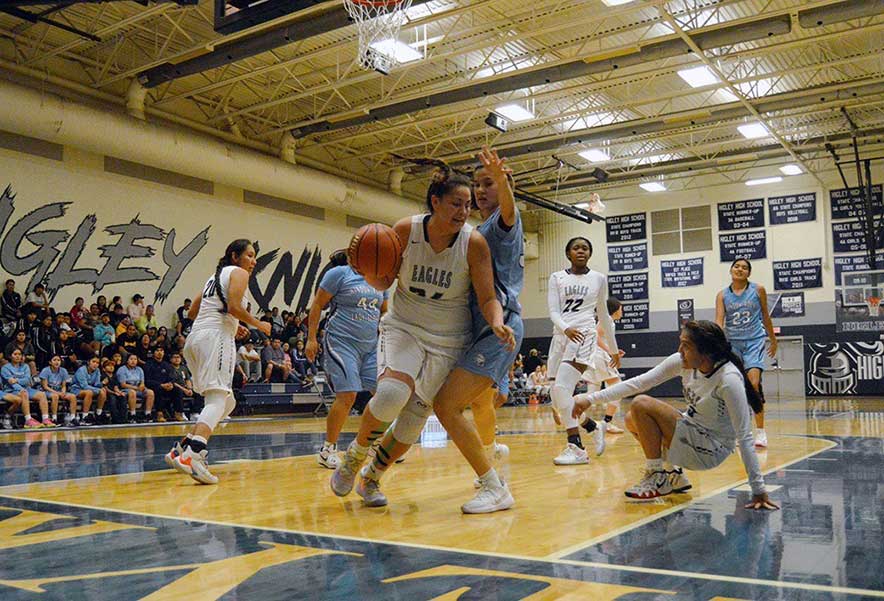 There is no argument that reservation life offers many benefits. But for those with hopes of being recruited to a collegiate basketball program, it can be hard to get serious looks from college coaches while playing on the rez.

“You don’t see a lot of Native Americans leaving the reservation to get themselves looked at or for a better education,” said senior center Tiffany Quigley. “For the Navajo girls to travel and move out here, and to go through the struggle to be out here, it is amazing. I am proud these girls who are out here with me.”

Quigley, who is the team captain, is among the five Navajos on ALA’s girls’ basketball team. Together, they have become a force at ALA and in Valley basketball.

The team is only in its third year as a basketball program, but it has hopes of making a deep run into the Arizona state tournament. The first year, the team went 22-0 and became the state champion for the Canyon Athletic Association conference – with the help of Quigley and her older sister Samantha. In the team’s second year, school officials opted the team into the Arizona Interscholastic Association and sat out of competition due to AIA’s transfer rules. This year, ALA is back and competing against AIA teams.

The team has been following Quigley’s direction as floor general and for good reason. At 5-feet-10, she’s got it all.

“Tiffany is a phenomenal leader and an outstanding athlete averaging double doubles,” said ALA’s head coach Al Springfield. “She has an extremely high IQ. She is a very hard-working, determined young lady with a lot of ambition. Anyone who gets her at the next level will be extremely pleased. As a person, she is a caring young lady and always willing to take time out to help teammates. She is the gold standard for the team.”

One of Springfield’s success stories in the short time he’s been at ALA is Samantha Quigley, who graduated last year. On one of her best nights, Samantha scored 48 points in one game, including 12 three-pointers. With the help of Springfield, Samantha was recruited and is currently playing at Trinidad State Junior College in Colorado.

“This was the best decision me and my sister ever made,” the younger Quigley said of choosing to attend ALA. “We already knew it was a good opportunity to get out and to see the world. It really opened up more doors us.”

The Quigley sisters are originally from Houck, Arizona and were attending Valley High in Sanders, Arizona before deciding to transfer to ALA.

“I don’t think Sam would have gotten a scholarship if we didn’t come out here,” Quigley said. “We wanted a better education and there wasn’t anyone pushing us to be better or helping us gets us scholarships. No one sent film. If we didn’t take the chance, I don’t think we would have improved our game or gotten looked at by colleges.”

Springfield was coaching at Chandler-Gilbert Community College when he met the Quigley sisters. At the time, Springfield talked to the elder sister about playing college ball for him, but Samantha was only a sophomore.

When the sisters heard Springfield had left Chandler-Gilbert to coach at ALA, they packed their bags and moved to Gilbert.

“We knew he had been a college coach and he had connections,” said Tiffany Quigley. “We knew he would make us better, help us get a scholarship, and he knows what it takes to be successful at the college level.”

Like Quigley, the other Navajo girls heard about Springfield through word of mouth.

“I heard a lot of about the education at ALA and the coach,” said senior Keeli Kaye, the team’s starting point guard and shooting guard, who has familial roots in Kayenta and Winslow, Arizona. “I heard about how disciplined the program was and how good the education was.”

Needless to say, playing with other Navajos was a bonus.

“I like it here a lot because the school I was at, there were no Natives,” said Kaye, who moved from to Gilbert from Tucson. “It makes it easier knowing that the girls around you know the same culture as me and know what background I come from.”

Kaye, who has received offers from junior colleges, said the main goal this year is to get to state and be offered a spot on a college team.

Senior post Kyleigh McCabe has roots in Shiprock, but was born and raised in Phoenix.

“For me, I’ve never known life living on the reservation, that is where I am different,” said McCabe, adding that her mother attended The University of Arizona before working for the City of Tempe. “But I tend to not think of it has a hindrance or anything bad. I have learned a lot out here, even though it’s hard that I don’t have Native friends.

“Being a part of this team and having Native teammates, I find a balance,” she added. “You see them, and you don’t feel so alone. We even use simple words in Navajo like, ‘Ya’aa’tééh.’”

Wyann Whiterock, a sophomore point guard, moved from Tuba City to Gilbert and hasn’t done too badly making the adjustment.

“It was a surprise for me,” she said. “I’ve never seen Natives play at big schools like this. I only ever saw Natives coming down here from up north to play. It has made a big difference for me.”

Though the city has offered some challenges for Whiterock both in the classroom and the court, Whiterock is finding some success, having been honored this season by the MaxPreps for averaging 30 points per game.

“It’s very challenging,” she said. “I have to focus on the plays and know my plays. I have to know what I’m doing on the court as part of the starting five.”

Like the rest of the girls, Whiterock hopes to play collegiately.

“I want to get a scholarship, it is something I’ve always wanted,” she said. “I’m always saying, ‘I will make it and do it.’ I really think ALA will help me do that.”

Having coached Natives in his time and having a half-Navajo daughter, Springfield said he wants to see more Natives at the college level.

“I am very passionate about helping girls get to the next level,” said Springfield. “When I’m talking with college coaches, I tell them these girls are already playing the college sets. These girls are running plays that are being run at colleges.”

Springfield said though many college coaches see the talent, there seems to be a common concern when it comes to recruiting Native athletes.

“One thing many college coaches ask themselves is, ‘If we recruit this girl, will she just leave and go back to rez?’” Springfield said. “I did have girls that left the team when I was at Chandler-Gilbert, who went back to the rez for whatever reason. These D1 and D2 schools invest a lot in their players. But there are no stereotypes stopping these girls.

“It has been a hard transition for some of them,” Springfield added. “Academically, you are being taught differently than they would be on the rez. Culturally, there aren’t many Native American girls on campus. Some went from being in the majority to the minority.”

While coaching at Mesquite High in recent years, six of his girls’ basketball players signed with Division I schools.

“There are some on the team now that have just as much talent as those girls,” Springfield said. “It is a shame that some of these girls on the reservations were not getting the same opportunities as girls here.

“I took an interest in giving them an opportunity to play basketball (at the college level) and give them a chance to be respected in the same way as those in the Valley are respected,” he added. “As a team, we don’t see color, we see a common goal of being one team and doing what we can to win state.”

ALA has an overall record of 11-3 and 2-0 in their section and sights are set on the state tournament.

“These girls have been able to contend with other powerhouses and they’re getting a good education,” Springfield said. “I tell them, ‘If you can figure out how to work hard now and how to push yourself on the court, it will translate into life. Be a winner here and you’ll be a winner in life.’ For us, it’s not about never failing, because if you don’t fail, you can never grow. You have to fail to be better.”