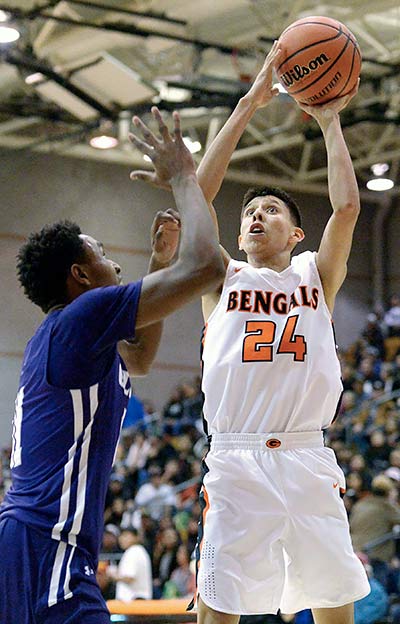 When most see all six feet and four inches of Quinn Atazhoon, they see a young man with one job — to protect the paint.

It is easy to see that Atazhoon belongs underneath the goal, but the Gallup High School junior is more than his height.

Gallup High School head basketball coach Joshua Dunlap said his big man can do just about everything he’s asked, even the job of a swift guard.

“He plays inside, he plays out,” he said. “Offensively, he’s probably one of the most skilled players I have ever coached. But the best thing about him is he knows when he needs to bring on the defense.”

Atazhoon was brought up to be a multi-faceted player; it became an aspect of his game that developed over time, and something that has swiftly become one of the Bengals’ secret weapons.

The now 17-year-old spent most of his childhood in Tucson, Ariz., but has roots in Oak Springs, Piñon, and Shiprock.

He said he remembers picking up a basketball when he was about four or five years old.

“I used to have a small hoop in the hallway, and a tiny ball,” he said. “My dad bought me that and I used to play all the time.”

Atazhoon is the son of former University of Arizona basketball player Cliff Johns and Gervana Begaye.

He grew up playing traveling basketball and in tournaments throughout the Southwest, and had his father as his trusty coach.

“My dad …. he just brought me into the sport and I just fell in love with the sport,” Atazhoon said. “I just wanted to take off where he left off.”