If there was ever a time for the Chinle boys’ basketball team to put everything together, this was it. 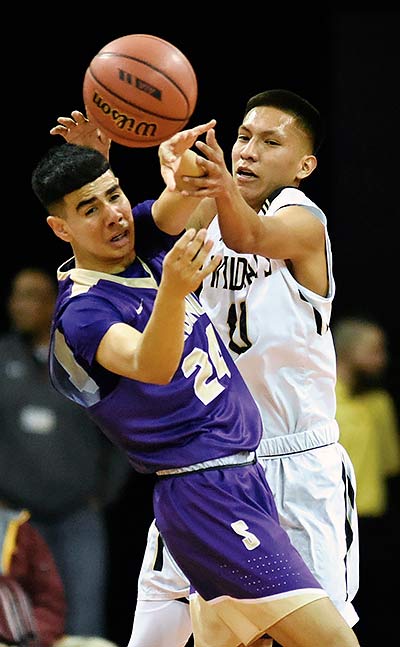 Unfortunately, the top-seeded Wildcats could not find any rhythm on Tuesday night as they fell to No. 8 seed Tucson Sabino by a 56-46 count in the Arizona 3A state quarterfinals.
The Wildcats (27-6) never led as they fell into an early deficit, trailing 14-4 in the first six minutes of the contest.

“Offensively we couldn’t get anything going,” Chinle coach Raul Mendoza said. “I think we’re pushing it and we were not patient. I think we tried too hard and that is how we got behind.”

Mendoza said they had their chances but every time they made a steal they would give it right back.

Defensively, he said they were a step behind as the Sabercats made them pay by placing four players in double figures. Conversely, the Wildcats had only Cooper Burbank in double figures as he finished with 22 points.

“It wasn’t our night as far as playing the game we normally play but I have to give credit to the other team,” Mendoza said. “(Sabino) played well and they did what they had to do to win the game.”

With 11 players at his disposal, Sabercat coach Marty Roth said the game plan going in was to wear down the Wildcats.

“We really focused on doing what we’ve done the whole season and that is we get aggressive,” Roth said. “We play full-court man-to-man and we’re looking for opportunities to trap but more than anything we wanted to establish that aggressive mentality.”

Roth said the aggressiveness they apply is like chopping down a tree.

“Nothing is going to happen on that first swing but if you keep swinging that tree is eventually going to go down,” he said. “With that mentality and us playing together we have the ability to wear down an opponent no matter if we take some bad shots or fall behind early.”