Coaching means giving back to community 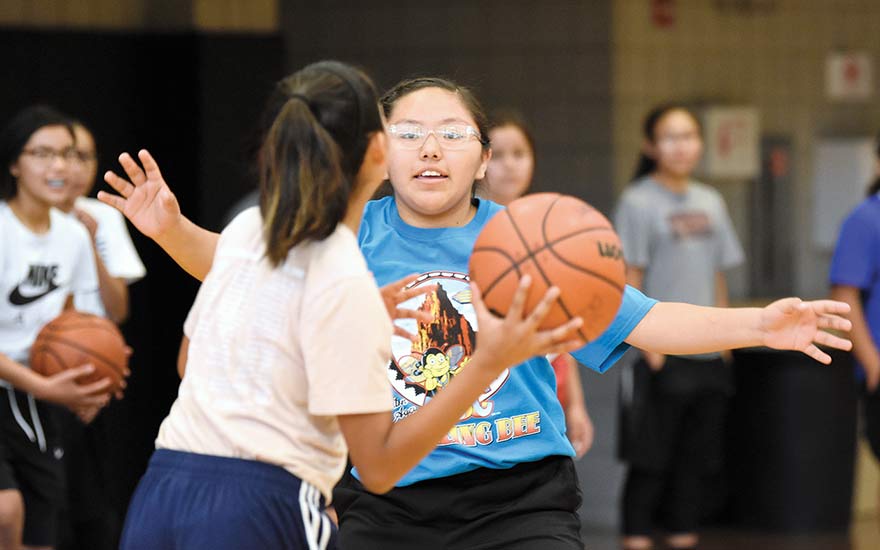 Navajo Times | Ravonelle Yazzie
Aubrey Lee, 11, from Red Mesa, Arizona keeps her hand out to guard a camper during the Rising Stars girls basketball camp on Friday at Navajo Preparatory School in Farmington.

Tanisha Begay once shared a basketball court with Ryneldi Becenti while playing in a 12-and-under tournament.

Becenti yelled at the players she was coaching to guard her.

“She was screaming at her team to guard me,” Begay said. “She’s, like, ‘She’s not even good, guard her.’ That’s the first time I ever remember her.”

Now, nearly a decade later, the two shared the court to teach upcoming girls to be the best ballers they can be.

Begay, who finished her second season playing on the Fort Lewis College women’s basketball team, said it was a chance to get an inside look at the camp she had heard about but never attended or instructed.

“When I was invited, it was cool … I’ve never gone to the camp, I always wanted to see how it played out and wanted to see just the way they run things,” Begay said.

“I feel like they do so many things for the kids, that’s something I really wanted to get into is giving back to my community,” she said. “And making it local for the kids to be able to play basketball at a different level, with higher expectations like this camp.”