The first eight minutes of the 1A North girls’ championship game went back and forth between the Rock Point Lady Cougars and the St. Michael Lady Cardinals.

But in the second, the Cougars gained some control as they held off St. Michael by a 58-44 count at the Window Rock Events Center on Saturday night. 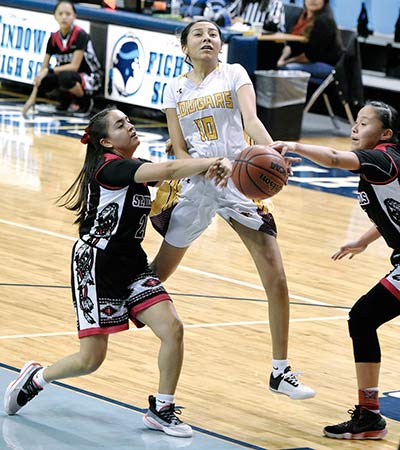 “I told the girls, ‘Don’t panic,’” Rock Point coach Andrew Reed said of their 13-12 first quarter lead. “It could have gone either way but I told them to play smart basketball and that’s what they did.”

The 14-point win earned the Cougars their third consecutive conference title as Rock Point earned the No. 2 seed for this year’s 1A state tournament.

They will host No. 15 Mayer on Friday night at 7 p.m. in the opening round before the state playoffs shift to the Prescott area with the championship game scheduled for Feb. 22.

After trading baskets with the Cardinals in the first stanza of the 1A North title game, Rock Point opened the second on a 15-5 run with junior guard Tierra John scoring 10 of her 18 points.

John started the quarter with five straight and with 1:54 left in the quarter she added a putback for a 25-14 advantage.

A three by St. Michael reserve guard Clarissa Joe ended a five-minute scoring drought for the Cardinals but at the other end John answered with her second of three treys.

With the momentum, Rock Point extended that margin to 41-23 at the 2:37 mark of the third; it’s largest of the game.

“We made some adjustments and I thought our second group played better than our first group,” Adams said.

In particular, the St. Michael coach applauded the efforts turned in by Joe, who finished with nine points.

“She really stepped it up and knowing Gabby she’s going to have an aggressive game,” the St. Michael coach said. “She was tough on defense and once we started subbing in our second group they brought us back into the game.”

That second group pulled the Cardinals within 46-34 at the end of third with junior Chiara Holgate putting in five of her nine points.

St. Michael kept chipping away as they closed that gap down to 46-39 on a two-point basket by Holgate with 6:21 left remaining.

Nevertheless, the Cougars held off that St. Michael rally to stay in front as sophomore Shelby Chee kick-started a game-ending 12-5 run with a trey.

In the midst of that run, Rock Point freshman Arianne Begay put in seven of her game-high 20 points.

“I liked the way we finished strong,” Reed said. “We kept our composure and we kept the momentum.”

The Rock Point coach is looking forward to the state tournament as he has high hopes for his team at a top finish.

“I was happy with where we are at,” he said. “Some of the teams haven’t seen what rez ball is so we have that to our advantage. We’re going to be playing at another level because we can run the court and we can play tough defense.”

Adams is also looking at a deep run in the tournament despite their No. 7 seed as the Cardinals are scheduled to host No. 10 Grand Canyon on Friday at 7 p.m. at the Fieldhouse in Fort Defiance.

“I always tell the girls your ranking doesn’t determine your ability as a team,” he said. “We’ve gone to the state tournament as the No. 2, No. 5 and No. 10 seed. I keep telling the girls the rankings are just a number.

“When it comes to the state tournament we all start with a clean slate,” he added. “This year’s it’s going to come down to who has a deeper bench, who is more disciplined and who is going to show up.”