The Window Rock girls’ basketball team got the stops they wanted. 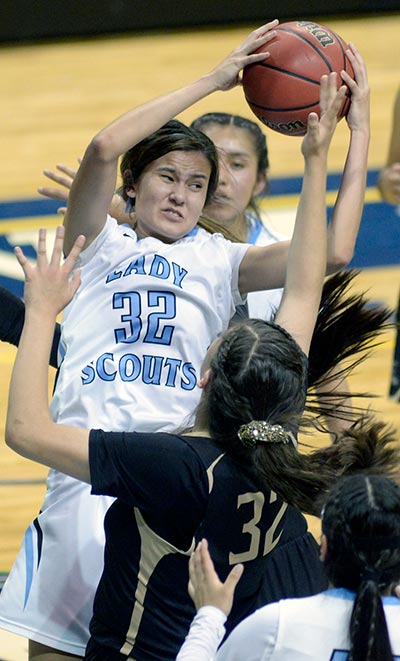 The Lady Scouts contested every Chinle attempt as Window Rock pulled away with a 46-36 win on Friday night despite facing a height disadvantage.

“We knew they were going to post up on us,” Window Rock coach Sharon Toadecheenie said. “We just told our players that they needed to front them and we worked on that the whole week.

“It was a matter of fronting them and getting help inside,” she continued. “We had to double-team them and those little things made it happen for us.”

Coupled with their 52-50 win over fourth-ranked Ganado on Tuesday, the Scouts improved its overall record to 15-6 and 4-3 in 3A North play.

“As a coach, they’re peaking at the right time,” Toadecheenie said. “It’s about being a family for us, being together and showing a lot of support for one another.”

The home team used a 10-2 run in the middle of the third to open up a 31-23 cushion with Window Rock senior Jana Solee scoring seven of those points, which included a trey at the 2:02 mark.

“I think when we hit a three our energy level just goes up,” said Solee, who finished with a team-best 13 points. “That helped a lot to with our team energy and we just pushed harder.”

The Wildcats chipped away at that deficit thanks to their defensive pressure and pulled within 35-32 after senior Brandii Clah nailed a three-pointer with 5:27 left in the fourth.

In the closing minutes, they could not find the basket as Window Rock outscored them 9-4 to pull out the win.

“We just had a bad shooting night,” Chinle coach Francine McCurtain said. “I have to give credit to Window Rock for getting us out of our system.

“We tried to go to the inside but that wasn’t working so we outside,” she added. “We just missed too many shots. We also missed 14 free throws so it that kind of night for us.”

With their bad shooting woes, McCurtain said her team started to doubt themselves.

“We just beat ourselves but Window Rock did play a great game,” she said. “It seems like we ended up playing their game plan.”

Sophomore post Aisha Ashley was the only Chinle player to reach double figures as she finished with 15.

The loss ended Chinle’s five-game winning streak as they will take on Ganado on Tuesday for its final game of the regular season.

“Window Rock broke our streak and I’m just hoping that we can get back on the same page,” said McCurtain, whose team dropped to 13-8 overall and 5-4 in 3A North play.

The Scouts has three conference games left starting with a road game at Page tonight.

On Feb. 7 they will host Monument Valley before taking on Tuba City on the road on Feb. 8.