With the intent to play stingy defense the Scouts held off a strong Chinle team by a 42-40 count on Friday night, extending its current 3A North-winning streak to three games. 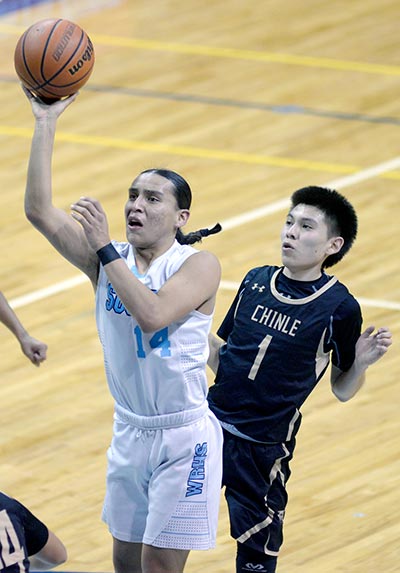 Window Rock Scout Cauy Silversmith (14) shoots the ball for the basket after getting by defending Chinle Wildcat Curtis Begay (1) on Friday night in Fort Defiance.

“Our program is based on being defensive-minded,” said Window Rock coach Tom Bizardi, whose team improved to 14-10 overall and 4-3 in conference play. “We try to keep all of our opponents to 10-and-under for each quarter.”

In a wild finish, Window Rock got a pair of free throws from junior Cauy Silversmith with 7.2 seconds to net the two-point win.

“It was very intense,” Silversmith said, who finished with 15 points. “There was a lot of people and I just had to focus on hitting those two free throws.”

Like his coach, Silversmith said the difference came down to the defensive end. Other than a pair of 11-point periods in the opening half, the Scouts stayed the course much to the liking of their head coach.

“We have to be stingy because we’re still waiting for our offense to explode,” Bizardi said. “We want to make sure we stop teams and that’s been our mentality.”

That concept is not going unnoticed, as the Scouts have beaten the likes of Page and now Chinle, the two top teams in the 3A North.

“This is pretty sweet,” Window Rock senior forward Adrian Destea said. “It’s been awhile since we’ve been on a roll, especially against some of these top schools. Beating Page and Chinle is a huge accomplishment.”

And while he didn’t score a point in Friday’s game, Destea played an important role in shutting down Chinle senior Cooper Burbank despite being in foul trouble. The Wildcat forward was held to only 10 points, which was 14 below his average.

“I tried to hold him down as long as I could,” Destea said. “Playing with four fouls I had to play smarter on him so I just played him straight up.”

Down the stretch, Cooper was off target on his last two attempts as he tried to send the game in overtime to no avail.

“It’s been a long time since Window Rock has beaten Chinle,” Silversmith said. “I’m glad that I was apart of this team to finally do it.”

The Scouts were able to pull out this win without Gallup transfer Quincy Smith, who played in five previous games.

“I don’t know the full details on his status,” Bizardi said. “I’m just getting updates from our athletic director so we’ll have to wait and see what happens. I really don’t know the situation but it has to do with his transfer.”

With Smith out, Window Rock had others step up with senior guard Derian Long putting in 15 points, which included three treys.

“He really took advantage of getting that starting spot position,” Bizardi said of his pupil. “He teammates created for him and when they drove they kicked it out to him. He’s comfortable with those open threes.”

The Scouts will travel to Page today as the Sand Devils are looking to seek revenge in 46-43 setback last Saturday.

“We’re going in with the same game plan,” Bizardi said. “This team has really owned the defense but we know the second time around is always the hardest when you play a team in a rematch game.

“It’s going to come down to who executes better and who makes the less mistakes,” he added.