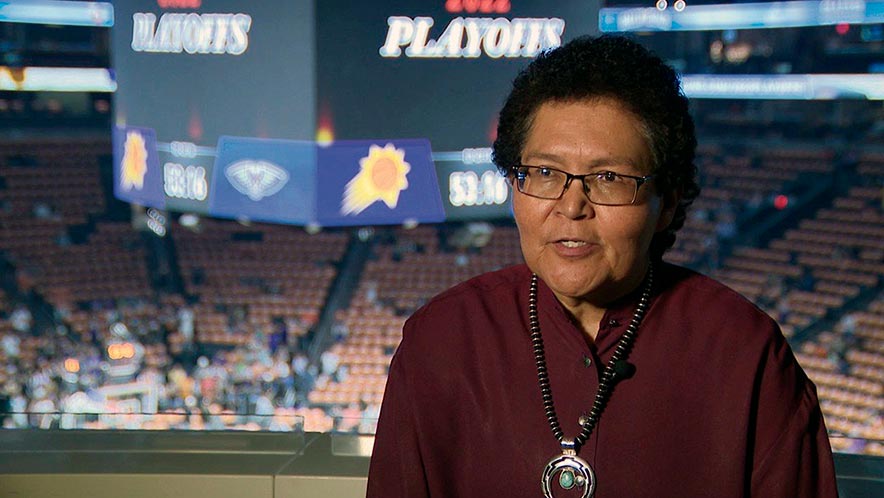 There is a new, yet familiar voice announcing the play-by-play action for the Phoenix Suns.

Navajo sportscaster L.A. Williams and color commentator Tanya McCabe can be heard on the airwaves on your 96.1 FM dial with Capital Country broadcasting the Suns’ postseason run in Diné Bizaad.

“It’s storytelling, and I put myself on the floor with the players and coaches, and I speak on their behalf in the Navajo language,” Williams said. “I get our listeners engaged and, win or lose, I tell them what’s going on.”

The two radio personalities will be broadcasting all of the Suns’ home games throughout the playoffs.

On Tuesday, No. 1 seed Phoenix picked up a much-needed 112-97 win over the New Orleans Pelicans in Game 5 of the NBA first-round playoffs. The Suns now lead the series at 3-2, and they can close it out on Thursday night on the road.

If necessary, they’ll play in Phoenix on Saturday for Game 7.

“You know, with the broadcasts in Navajo of the Phoenix Suns’ postseason home games, it highlights our people,” Nez said. “I mean, we’ve gone through a difficult period of time, these two years with the pandemic, but it also shows that we get the opportunity to share the resilience of our people.

“And I think many people out there know that the Navajo people are strong,” he added. “And to have them hear the broadcasts, and maybe they don’t know the language, but they hear what our warriors, the Navajo Code Talkers, used to help win battles and help win World War II. 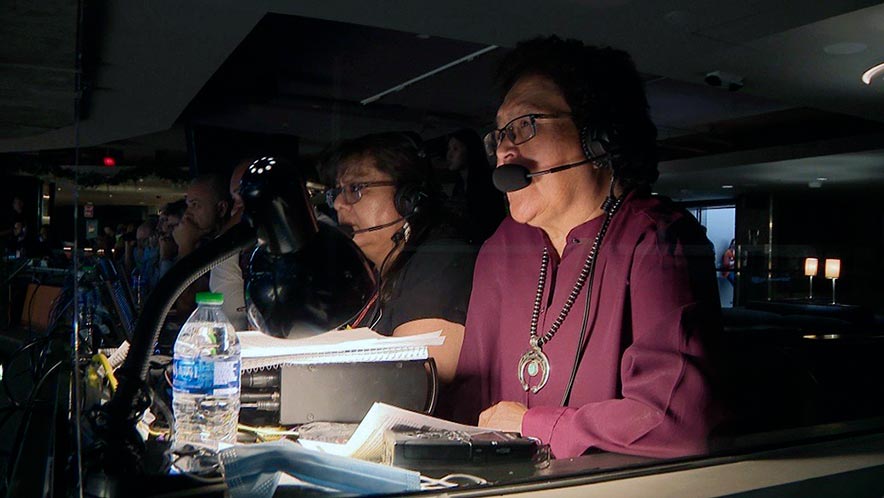 Williams, the program manager for Diné College’s KXWR, had this gig lined up for quite some time, but before she proceeded to take the offer, she wanted the go-ahead from Diné College President Dr. Charles Monte Roessel.

“I felt that I needed his support for me to do this,” Williams said while adding that she is doing this while representing the tribal college.

This is Williams’ second stint in broadcasting the Phoenix Suns in Navajo. She sat alongside Kenneth Maryboy on April 23, 1993, during the Phoenix’s franchise run in the 1993 NBA Finals on 660 KTNN, Capital Country’s sister station.

“That came about 29 years ago when Al McCoy asked the franchise if we could broadcast the game,” she said. “You know, he’s still broadcasting, and he’s been doing this for 50 years.”

On Tuesday, McCoy, who celebrated his 89th birthday, started commentating on the Suns’ game in 1972. With five decades in the business, Williams hopes that the Phoenix franchise will come through with a world title for the NBA Hall of Famer.

“Man, it’s time for him to win a championship, so he can retire,” she said of McCoy. “He’s been following the Suns for all these years, and we’re pretty much due for one, so it’s time for them to win their first championship.”

After that initial run, Williams said KTNN followed the Suns and commentated on a few games during the regular season.

“I think we did that for about three years, and it phased out,” she said.

After nearly three decades, that partnership got revived with the help of Shawn Martinez, the senior director of Live Presentation for the Phoenix Suns.

“During the pandemic, I applied for the job with the Phoenix Suns,” Martinez said. “It was my third time, so the third time was the charm, and I got the job and landed in Phoenix.”

Martinez, a Diné who has roots in the Window Rock and the Chinle area, said the franchise worked through the pandemic, and eventually, they started inviting fans back into the arena. And when the Suns made a run into the NBA Finals last season, he thought about bringing the Navajo broadcast back, so he reached out to Williams.

“We couldn’t really connect right away,” he confessed. “And so coming into this season, I proposed it to my boss, asking what if we get a Navajo broadcast back here with KTNN and Capital Country.”

Naturally, Dean Stoyer, the Chief Marketing and Communication Officer of the Suns, agreed, and everything got signed off after the Suns got the approval from the league.

Since taking over the job, Martinez said he wanted to help facilitate the Suns’ involvement with the 22 tribal nations in Arizona.

“When I got back, one of the things I really wanted to do was be the conduit for all the tribes in Arizona, get us involved and be apart of what’s happening with the Phoenix Suns,” he said. “We had our Native American heritage night. We took a big step that night by bringing in dancers, bringing in a Native American DJ, having the national anthem sung in Navajo that night by Kahara Hodges.”

Martinez said having Williams and McCabe in the broadcast booth extends that commitment.

“We’re just trying to keep that momentum going, knowing that we had the playoffs coming, knowing that L.A. did do the broadcast 29 years ago during the playoffs with Charles Barkley and all those guys,” he said. “All the things just aligned perfectly, and it was a good time to bring it back, and knowing how much I love our tribe and what we’re all about, and just amplifying our voice was something that was definitely a mission for me.”

Williams said she’s noticed a few changing since her first broadcast of the Suns.

“The players are younger, and the game is a lot quicker,” she said. “Back in the old days, everybody knew Charles Barkley was going to take a shot every time.

“Now we have Chris Paul, and if they’re down he’s gonna take it,” she added.

Like she did 29 years ago, the Whitecone, Arizona, native has given Navajo names to some of the top players from Phoenix. In her broadcast, she dubbed Paul as ” Naat’áanii.”

“He’s our Naat’áanii of basketball,” she said. “He’s the leader, he’s one of the oldest; he’s a clutch player, and he’s an all-around player.”

Williams also has dubbed Devin Booker as “Báhózhóní” for his charm.

“He has earned the respect of a lot of basketball players, and he’s one of the youngest players in the NBA,” she said. “And he has that smile, so he’s Báhózhóní.”

Williams said those simple Diné words could go a long way in preserving the Navajo language.

“They’re getting a good taste of it, and this is something they can learn from,” she said.

Williams, who grew up speaking Navajo with her parents and grandparents, said it’s important to know where you come from, which involves the language.

“We’re Diné, and we identify ourselves through our language,” she said. “What I’ve learned from my grandparents is the same thing I’m teaching the younger generation, and I’m at age to where it’s our turn to give back, which is – Nihí Nahodeeshzhii – meaning now it’s up to us to share what the future is in what we’ve learned from our grandparents, things they learned from our ancestors.

“We have to get younger generations ready, and when we’re not around, they get to share what we shared with them today 50 years from now,” she said.

Through her broadcast with the Suns, the media outlets have asked Williams about the Navajo language.

“People keep saying our language is dying out,” she said. “People say that, but I’m telling the media down here that we’re not dying out.

“I represent a college where our instructors read and write the language,” she said. “And they tell the history of the Navajo tribe of how we came about with Navajo Long Walk. I get to share that, and I’m glad that these media are curious about our culture, but our language is not dying out.”

Nez agreed while highlighting the efforts of local school districts in teaching the Navajo culture and language.

As an example, Nez attended a recognition ceremony at Chinle Junior High School on Monday, where Arizona State Superintendent of Education Kathy Hoffman came to present an educator with the Milken Family Foundation award. The awardee went to Chinle Junior High Principal Melissa Martin, as she was presented with the $25,000 Milken Educator Award for being the top educator in Arizona.

“In this assembly, we spoke Navajo,” Nez said. “The Chinle Unified School District embraces the language and teaches it to our younger generation.

“I know other schools in the Navajo Nation are doing the same,” he added. “There’s a concern about losing our language, but there is a resurgence or a renaissance in teaching our culture and way of life.”

Nez said he is proud of the work that Williams, McCabe, and Martinez are doing in sharing the Navajo culture on a worldwide stage.

“Our Navajo people are all over the world doing great things,” he said. “You’re seeing that in full force with the Navajo language being broadcast with the Suns game.”