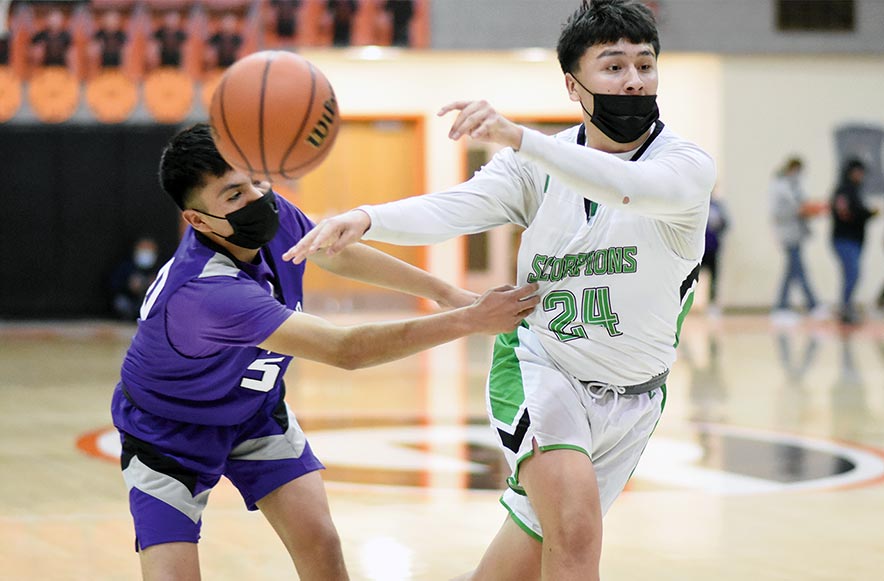 Special to the Times | Ravonelle Yazzie
Farmington’s Gustavo Rodriguez tosses a “no-look” pass to his teammate during a game against the Miyamura Patriots on Jan. 7 during the Gallup Bengal Boys Basketball Invitational. Farmington posted a 75-54 win to advance into today’s championship game against the Socorro Warriors.

The finals for the Gallup Invitational are set.

The Farmington Scorpions and the Socorro Warriors will square off in tonight’s title game at 6 p.m. at Gallup High School.

The host Bengals will play city rival Miyamura at 7:30 p.m. for third place.

In the first semifinal, Farmington pulled away from Miyamura with 76-51 win while Gallup was the on the wrong end of a 74-62 decision to Socorro.

Farmington led by as much as 31 points before settling for their 25-point win over the Patriots.

“We’re still young, but they get after it on defense,” Farmington coach Larry Don Chitty said.

Offensively, the Scorps had all 11 players score headed by the 18 points turned in by senior Caden Yazzie. Sophomore Cody Vassar-Steen added 11 while Michael Beck and Marcos Araiza chipped in 10 each.

“Our depth has been really huge,” Chitty said. “We can bring guys off the bench, and they can still perform. That’s huge when you don’t have that fall off.”

In the late game, Socorro jumped on Gallup with an early 11-0 advantage.

“We don’t play in crowds like this, so I told them to ignore the crowd and let’s have fun,” Griego said. “They came out and did exactly what we asked them to do, and you can’t ask for anything more.”

At the 5:15 mark, Gallup finally got on board with a trey from senior Joaquin Ortega, but Socorro continued with its hot start as they made 11-of-17 shots in the opening quarter for a 26-16 cushion.

Socorro guards Duda Jackson and Marcus Armijo did the most damage as they combined for 33 points in that opening half with Jackson putting in 17.

Jackson added two more points in the third, but he was saddled with fouls as Gallup closed the gap down to 56-51 going into the fourth.

“I just think we didn’t have an answer for No. 3,” Gallup coach Joshua Dunlap said of Jackson. “When he was out we came back. That’s a good team. They have great athletes over there.”

In addition to Jackson, the Gallup coach said Armijo created problems for his team as he finished with 29 points, which included five treys.

Jackson wasn’t too far behind with 26. 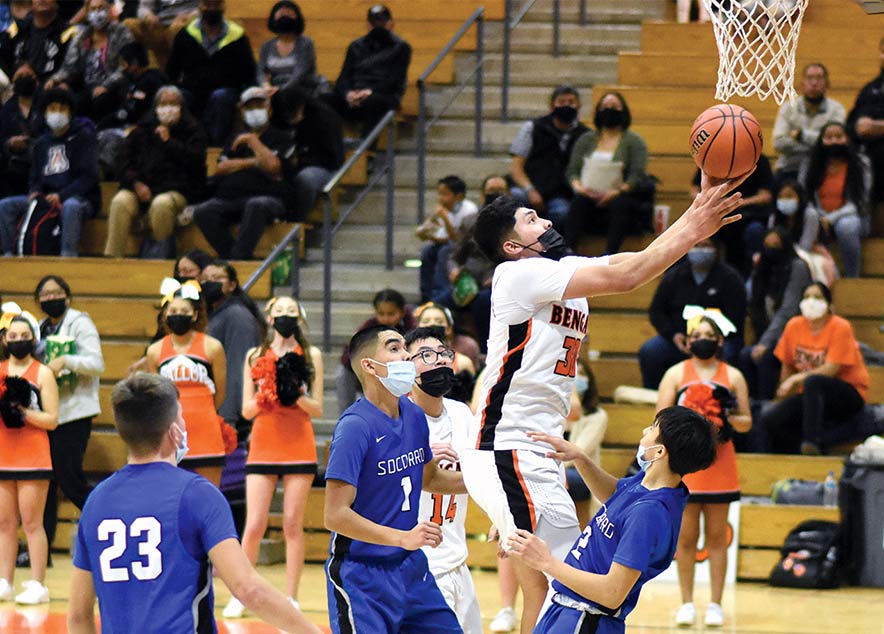 Special to the Times | Ravonelle Yazzie

Gallup’s Joaquin Ortega takes the ball to the hoop on Friday night against the Socorro Warriors at the Gallup Bengal Boys Basketball Invitational. Gallup dropped a 74-62 decision and they will play city rival Miyamura for third place. Socorro is scheduled to play Farmington for the title game.

“That team is well-coached,” Dunlap said. “If you worried about (Jackson) or (Armijo) they had other guys step up, so they’re very well-coached.

During its third quarter run, the Bengals got six points each from freshman Kristian Touchine and senior Trey Bruner. The two players scored 12 of Gallup’s 21 points.

Gallup got going when Nathaniel Yazzie kickstarted a 17-4 run with a two-point basket with 4:26 left.

After two missed shots the Bengals scored on seven straight possessions, which was capped by an inside basket from Ortega as Gallup got within 56-51.

“We knew they were going to make a run eventually,” Griego said. “They’re a great team and they have a great program, and I knew after they played Window Rock we were going to be in a battle.

“The run didn’t concern me as much as just as long as our kids kept their heads up,” the Socorro coach added.

Gallup, which was led by Ortega’s 17 points, is looking to bounce back against Miyamura.

“This is a huge rivalry in the city,” Dunlap said. “Both are going to be hyped up. When you have this city rivalry people play out of their minds.

“You know you could have a kid that averages two (points) might explode in front of his family for 14,” he said. “That always happens with us and it’s going to be a crazy game. I hope we stay disciplined and not feed into the big energy that’s in the crowd, and really focusing on our game plan.”