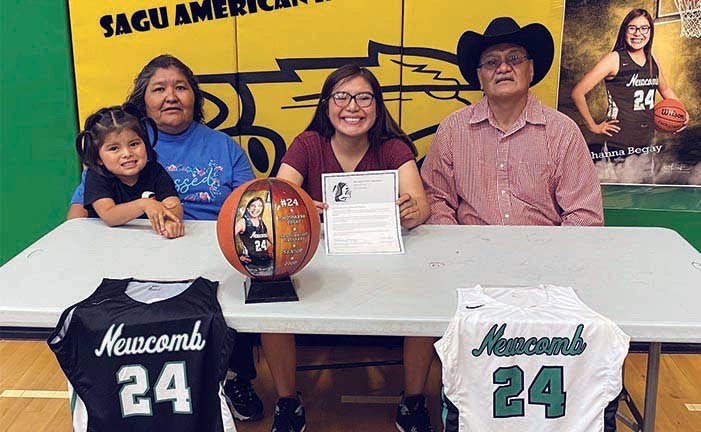 Submitted
After weighing her options, Newcomb graduate Shoshanna Begay (center) decided to take her talent to play for the SAGU American Indian College women’s basketball team. She is pictured here with her parents Jimmy and Carolina Begay and niece Mia Henderson.

Her first option was to sign with Bethesda University.

But, after examining the cost of attending the four-year college in Anaheim, California, Newcomb graduate Shoshanna Begay looked at the three other offers she received.

“I wanted to go there but it was the money,” Begay said of attending Bethesda University.

“It’s a school that my family can watch me play,” she said of the two-year college in north Phoenix.

With an incentive to play near home, Begay said she is excited to join a fledging program that is headed by second-year coach Ty Wilson. She’s hopeful that after she completes her obligations at AIC she can play elsewhere.

“It has a nice campus,” said Begay, who is going to be studying early childhood education.

Wilson said he’s just as excited about signing Begay, who led the Lady Skyhawks in scoring with a 14.9 clip in points last season.

“There are a lot of players out there and we feel lucky to get a player like Shoshanna,” he said. “I’m sure she can tell you how much I loved the way she plays and I feel like she’s going to make a big impact in our program.

Wilson said he’s been recruiting Begay for the past two seasons, adding that the former Newcomb standout has a lot to offer to his program.

“She’s always been top five on our big board, which means she is a must-have for us to be successful,” he said. “She fills a definite need and we’re looking to make some progress from the previous year with Shoshanna in our program.”

With his program entering it’s second year in existence, Wilson said he’s only recruiting players that “have great character and people willing to be great leaders in the community.”

“Shoshanna displays every one of those attributes,” he said.

As a first-year program last year, Wilson said his team was placed on a one-year probationary period under the National Christian College Athletic Association. This upcoming season he said his program is going to be eligible for postseason play.

“We were ranked No. 5 last season based on our strength of schedule,” Wilson said. “We have three colleges in our division that are in the West Coast so we played all the NAIA schools in the Phoenix area.

“Our strength of schedule is way more harder than the normal teams in our division,” he said. “We feel like when tournament time comes, we’re going to be more than prepared.”

With only three schools in their division, Wilson said his team is going to play an open conference this coming season and they are going to shoot for an at-large bid to the national tournament.

Begay, who played at the varsity level since her freshman season, said she’s ready to take on the challenges of playing collegiate ball.

“I feel like I’m ready,” she said, while thanking her two high school coaches – Shawn Miller and Bill McLaughlin.

“My two high school coaches were really great to me,” she said. “I saw two different perspectives on the way the game is played. I’m just happy that we changed things around with the girls basketball program at Newcomb.

“There was a lot focus on what our boys did but we changed that,” she said, while referring to Newcomb’s Elite Eight run this past season in the New Mexico Class 2A state tournament.

In addition to her high school coaches, Begay also wanted to thank her older sister’s late boyfriend for encouraging her to play the game.

“I really didn’t like playing my freshman year but he got me into playing in a lot of (offseason) tournaments,” Begay said of Jeremiah Henderson, who tragically lost his life earlier this year in a car accident.

“He changed my perspective on the game,” she said.

Begay said she had to rethink the way she played on the court and a lot of that had to do with conditioning.

As one of the area’s fastest players, Begay was the Skyhawks’ biggest threat on the offensive end. The Newcomb graduate created tough matchup problems for opponents this past season but she had a preference.

“I love defense more than offense,” Begay said. “I think when you play defense you’re more in control. You can control the person who has the ball. If you’re standing in front of them and you’re guarding them they have to work around you to get to the basket.”

In the classroom, Begay finished fourth in her graduating class of 60-plus students with a GPA of 3.8. In addition to graduating high in her class, Begay took an online English class at San Juan College this past spring.

“I took a dual-credit course because I don’t want to waste my first year of college,” she said. “At some schools they make you take some (remedial) classes you should have learned in high school. I got one of those classes out of the way, using the district’s money.”

Begay is the fourth oldest daughter of Jimmy and Caroline Begay. Her siblings include older sisters Jasmine, Jazlyn and Maria and younger sister Hannah.