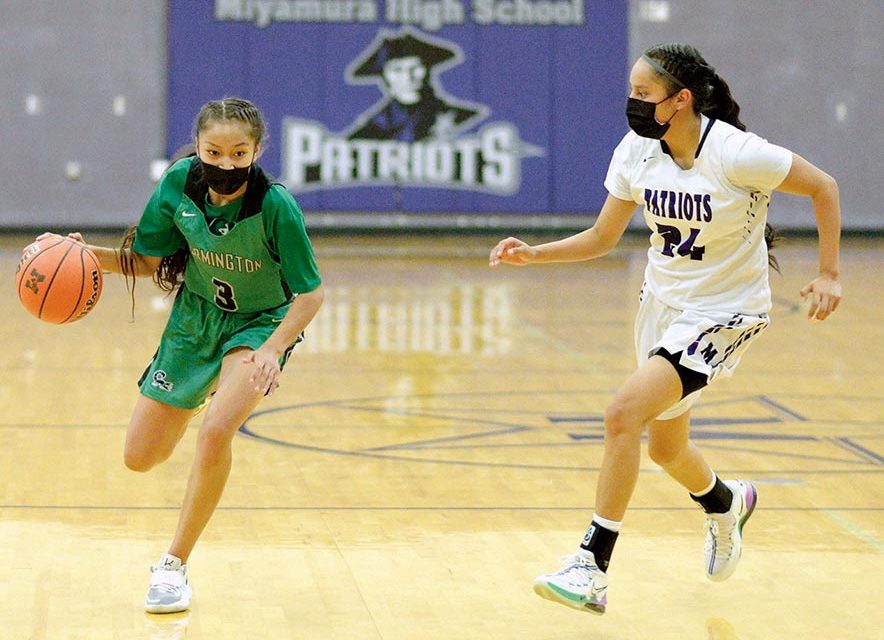 The Farmington girls’ basketball team needed a shot in the arm.

The 5A Lady Scorpions got that from junior Kiiyani Anitielu as she helped Farmington to a 65-42 triumph during last week’s season opener against Miyamura on March 27.

At the half, Farmington led 25-23 but Anitielu poured 17 of her game-best 26 points in the second half.

“Kiiyani is a phenomenal player,” Farmington coach Larenson Henderson said. “I think she was kind of standoffish in the first half and at the same time I know she wasn’t shooting much.”

Henderson said his junior point guard was trying to get her teammates more involved but when their offense becomes stagnant she needs to shoot the ball more often.

“I think she’s at that point to where she wants to play team ball, but when we’re struggling I told her that she’s got to step up,” he said. “She’s very athletic and talented and we just needed her to go off.”

The Farmington coach also acknowledged that baskets were hard to come by in that opening half. He attributed that to being idle due to the pandemic.

“The girls were nervous and for us to not do anything for a whole year I expected that,” he said. “It’s kind of frustrating but at the same time I just told the girls to relax because in the first half we were just missing.”

Miyamura third-year coach Josh Dupont said they’re still trying to work things out as they had five full practices before the start of the abbreviated season.

“We’re not there yet,” he said. “We’re just like everybody else – we’re trying to figure things out. Our goal is to get better every day and tonight I felt that they had a group effort. That’s what you want to see from your team. We’re trying to build that team culture and we’re looking for good things to happen moving forward.”

Like his counterpart, Dupont said being idle was disadvantageous for a lot of teams, including his.

“It’s been a long 13 months but this is a positive step for the kids,” he said. “They’re back in the gym and I’m very thankful. It’s been a long road up to this point and these girls have done exactly what they were supposed to do. They followed the guidelines and I’m just so proud of them.”

With the season being cut short to only a few weeks, Dupont said he’s looking to build a “team concept” mentality as they start District 1-4A play at Aztec on Friday.

“With a shorten season we go right into district,” he said. “This is my third year and it’s nice to have had some time with these kids. I think that’s an asset because we’ve had some good continuity across the board. That’s carried over but it’s been 13 months.”

Behind nine points from senior power forward Khaila Zunie, Miyamura played evenly with Farmington in the opening half. Back to back baskets from Zunie and junior point guard McKensie Billy gave the Patriots a 19-16 cushion with 5:05 left in the second stanza.

The Scorpions erased that deficit thanks to a seven-point outburst from Anitielu in the final two minutes of the half.

Anitielu picked up where she left off as she scored 10 of Farmington’s 20 points in third as they opened up a 45-31 cushion heading into the fourth.

“I was real happy with the team effort,” Dupont said. “I thought we were a little flat in the third quarter but against a good team you need to have four strong quarters.”

In the fourth, Farmington pushed its lead to as much as 26 points. As a team, the Scorpions had eight players score with senior Jade Henry and junior Tatum chipping in nine points apiece while Kamalani Anitielu and Davina Begay adding eight each.

“If we can start shooting lights out I think we’re going to be tough to beat,” Henderson said.

On Tuesday, the Scorpions opened district play by defeating Sandia 63-59 in overtime.

Henderson said the district is going to be stack with Sandia, La Cueva, Eldorado and Piedra Vista returning a lot of core players.