The world is about to find out how funny Navajos are.

“Rutherford Falls,” a new comedy that will debut April 22 on NBC’s streaming platform, Peacock, includes two Navajo writers as well as a Navajo director and actor. It’s also the first time, near as anyone can recall, a Native American has been a “show runner.” 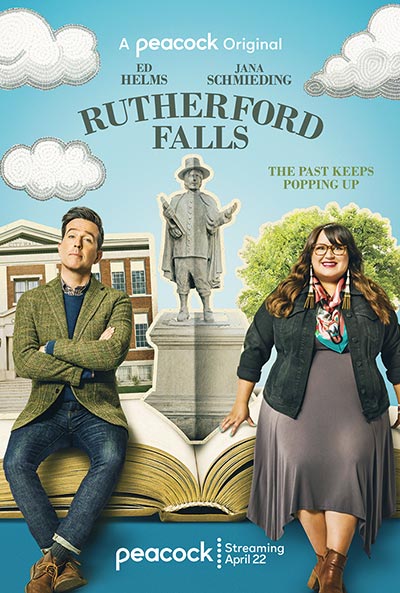 Sydney Freeland (“Drunktown’s Finest”), who directed four episodes of “Rutherford Falls,” explained what that is. “There’s a different hierarchy for film and TV,” she said. “In film, the director is at the top. In TV, it’s the show runner. They’re the lead writer, but they’re also creating the look, the feel, the tone of the show.”

So this is a pretty big deal, having a Native American in that slot? “It’s unprecedented,” said Freeland, who is bilagáana born for Tábaahá.

Sierra Teller Ornelas, the one in that position, agrees, but doesn’t want to hog the glory. “I’m always nervous saying I’m the first anything,” said Ornelas, who is Tábaahá born for Naakai diné’e. “But collectively, it really is a milestone for Natives.”

The third enrolled Navajo involved in the new show is veteran actor Geraldine Keams (“The Outlaw Josey Wales,” “Edge of America,” “Commanche Moon”), whom Ornelas described as “Navajo royalty.” “When she walked on the set, I was starstruck,” she said of the 69-year-old actress, who plays a member of the tribal council. “I’ve been watching her since I was little.”

“Rutherford Falls” is based on the relationship between a small New England town and its neighboring Native American reservation, personified by Nathan Rutherford (Ed Helms of “The Office”) and Reagan Wells (Lakota podcaster Jana Schmieding).

Both Nathan and Reagan are square pegs in their own communities. Rutherford Falls has changed considerably since Nathan’s family founded it in the 17th Century (it has a Black woman mayor, for one thing), and few of the modern townsfolk care about its history. Reagan made a choice a while back that alienated her from her tribe, which, as the savvy but devious casino manager (Michael Greyeyes) observes, is pretty good at holding a grudge.

Nathan and Reagan may be championing different versions of history, but they are childhood friends who have each other’s back when nobody else does — which is most of the time.

The show is the brainchild of Michael Schur, who has brought us such memorable ensemble comedies as “The Office,” “The Good Place,” “Parks and Recreation” and “Brooklyn Nine-Nine.” Schur developed the premise with Helms, and since it would need a Native perspective, brought in Ornelas, who had written for several of his shows, Ornelas said.

She was not expecting to be show runner.

“We just hit it off really well,” she said. “It was the perfect project for me, because I can draw from my experience as a Navajo woman, and also from my museum experience.”

Ornelas was the film programmer at the National Museum of the American Indian for five years out of college. Ornelas has been around the block, having written for such hits as “Superstore” and “Brooklyn Nine-Nine” for the past 10 years, but she was still a bit daunted by the opportunity.

“This one is different, because I’m the boss,” she said. “I’ve spent my career realizing someone else’s vision, and now there are people trying to realize my vision. It’s a big responsibility, but it’s also a lot of fun.” In addition to having a Native show runner and director, five of the program’s 12 writers are Native, which is another first.

“I’ve never walked into a writers’ room where half the faces are Native,” said Freeland. “I’ve done a lot of shows with Native content, but the producers and writers were white. “You spend a lot of time saying, ‘I’m not sure we want to do that,’ and ‘Maybe there’s a different way to approach this,’” she said. “With this show, there’s no need for hand-holding.”

Ornelas agreed, citing the example of a police scanner. “I was talking with Tazbah, and she was saying one of her family members loved the police scanner because she could keep up with what all her neighbors were doing. I knew exactly what she meant because I have an aunt who loves her police scanner. “I’m sure the non-Native writers would be like, ‘What’s a police scanner?’ or if they knew, they wouldn’t know how we use it – for gossip,” she said.

“It was so nice not to have to explain about the police scanner – all this time we’re able to save not having to explain things to white people,” she said.

More importantly, of course, having Natives behind the scenes means the Native characters in front of the camera are more developed. “Usually we’re portrayed either as the villains or as these perfect people who talk to trees and are magical,” Ornelas said. “In this show, the Native characters have a lot of texture.”

The theme, too, leaves room for depth and exploration. “What I love about Mike Schur’s shows is they’re always trying to say something,” Ornelas said. “‘Parks and Recreation’ was about how you can make a difference in small-town government if you really love your town.

It’s also a chance to showcase Native humor, which for some reason is a well-kept secret even though Ornelas says it’s been around at least since her ancestor, Paul Teller, entertained the Navajos interned at Bosque Redondo with his intricate stories.

“One of the biggest misconceptions about Natives is that we’re serious, somber and stoic,” said Freeland. “Natives are actually hilarious.”

Ornelas said that’s definitely true at her family home in Two Grey Hills, New Mexico, and recalls her Mexican-American father telling her how surprised he was when he first visited her mother, master weaver Barbara Teller, at her home and found it ringing with jokes and laughter. “He found himself laughing along even though he couldn’t understand Navajo,” she said.

Although “Rutherford Falls” isn’t specifically aimed at Navajos or Natives in general, Freeland and Ornelas hope they watch and pick up on some of the inside jokes.

“I love my people so much and I hope they watch the show,” Ornelas said. “I hope they see that it’s made with love.”