The Monument Valley Lady Cougars were 1.9 seconds away from winning the consolation bracket at this year’s Utah 1A state girls’ basketball tournament. 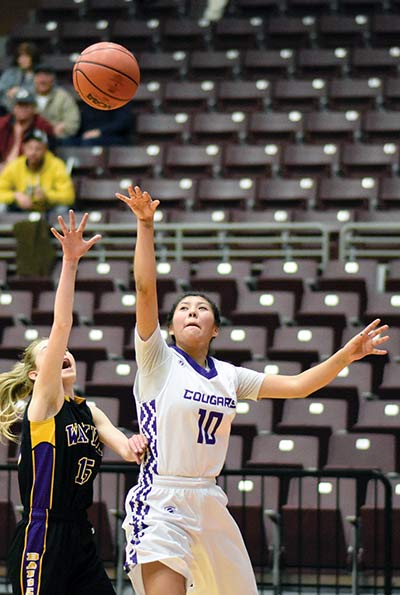 Lady Cougar Kaylin Bedonie shoots the ball from the three-point line on Saturday during a game against Wayne Badgers at the Utah 1A state basketball tournament in Richfield, Utah.

The Cougars saw their hopes of a fifth-place finish go to wayside when Wayne High School point guard Brynnli Nelson hit her third trey of the game off an inbounds pass on the right side of the court. That basket earned the Lady Badgers a hard-fought 64-63 win over their Region 19 rivals last Saturday at the Sevier Valley Center in Richfield.

“This was our fourth game with Wayne this year and we knew they were capable of making that shot,” Monument Valley coach Theresa James said. “I knew that was possible and I told the girls to play man and stick to your girl as close as you can.

That was the plan but it didn’t work out,” she added.

“That was probably the shot of the tournament,” Wayne coach Jan Ellet said of Nelson’s three-point basket.

Going into the state playoffs, Ellet said Nelson had struggled to find her shooting rhythm but she found it during the tournament. In the fifth place game, the Wayne point guard made 10-of-21 shots and finished the contest with 27 points.

To offset her production, the Cougars had seven players score with four players finishing in double figures headed by senior post Ervianne Cly.

“This is not how we wanted to end our season but things happen for a reason,” said Cly, who finished with 20 points and 11 rebounds. “I guess it just wasn’t our time to win but I’m fine with that.”

The Cougars also got contributions from junior Jamika Nelson as she finished with 14 points and 10 boards while sophomore Bertilena Atene chipped in 11 and junior Tanisha Cowboy helped out with 10.

Heading into the fourth quarter, MV led 45-35 but they were plagued with foul trouble as they lost the service of three starters with Jamika Nelson fouling out with senior teammates Kaylin Bedonie and Jasmine Staley.

“It made things harder for us to lose those three starters,” James said. “We just need to work harder at cleaning our defense but you know Wayne’s a good team. They’re a respectable team so it was a lot of fun playing them.”