Dominic Clichee first introduced himself to the Native American Basketball Invitational in the mid-2000s as a high school basketball player.

Last week, Clichee returned to the NABI community as a keynote speaker during the 2020 NABI Foundation Virtual Educational Youth Summit.

He gave a presentation via Facebook of his experience as a NABI alumnus and his journey as an epidemiologist on the Navajo Nation.

“NABI holds a special place in my heart,” Clichee said. “Not only did I play there but I actually worked the event when I working for Nike N7.

“One of the biggest tools and skills I learned from NABI was the ability to network,” he added. “I had the opportunity to interact with coaches and players.”

The former Navajo Pine standout played in the 2004 and 2005 NABI tournament. After graduating high school, Clichee signed with Clark University in Worcester, Massachusetts. 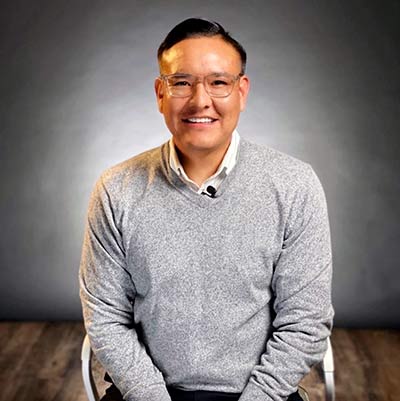 Submitted
Dominic Clichee gave a presentation about his experience as a NABI alumnus and his journey as an epidemiologist during the 2020 NABI Foundation Virtual Educational Youth Summit last week.

“It was thousands and thousands of miles away from where I grew up so that was definitely tough,” Clichee said.

He played one season at Clark University as the coach that recruited him took a position with the Boston College men’s basketball program.

“That small interaction and networking opportunity led me to eventually transferring to Haskell,” he said.

In between his junior and senior season, Juneau encouraged Clichee to apply for an intern position with Nike N7. At that time, Clichee said, Nike N7 was transitioning from a grant-funding organization into a full-fledged retail brand.

Following his graduating as the 2010 Student of the Year, Clichee interned for a few months and that eventually turned into a full-time position with Nike.

“I was at a high-level corporate structure to where I could see what was happening,” he said. “But I felt at the time I needed to be in the communities and be on the ground. That was where my heart was really at.”

As part of his responsibilities working for the N7 Fund, Clichee went through tons and tons of applications. It was there he noticed that a lot of the program directors that applied for the grants had “MPH” listed after their names.

And after doing a simple Google search, Clichee said that’s how he ended up being an epidemiologist.

“I was just good with numbers,” he said. “That is what an epidemiologist does. We look at prevalence and incidence rates, which is basically disease investigation to help identify areas where the disease is spreading and we find ways to mitigate the spread.”

Prior to this year, Clichee said they studied the prevalence and incidence rates of infectious disease at a local level but since March there has been a drastic shift with the COVID-19 pandemic.

The newly identified virus was first detected in China in December and as of June 28 the number of COVID-19 positive cases for the Navajo Nation had reached 7,469, which resulted in 363 deaths, according to a press release from the Navajo Nation OPVP office.

“We really don’t understand the disease process, it differentiates from person to person,” Clichee said.

Nonetheless, Clichee said the eight service units serving the Diné people are working together to mitigate the spread of this highly contagious disease.

“One of the things that a lot of people don’t get to see is the collaboration between the different entities on the reservation,” he said. “At one point we did have the highest rate of infection of COVID-19 in the United States and the world.

“However, this pandemic has brought opportunities to highlight areas where we need to improve and those areas include working with our federal partners, our tribal partners and the interaction between the different hospital facilities,” he added.

Clichee said they’re doing their best in identifying individuals that have contracted the disease.

Like all viruses, Clichee said the novel coronavirus needs a host to survive.

“If we can minimize the hosts that it has to infect then we can decrease the rates of infection,” he said. “What that means is staying at home and staying away from other individuals. I know this is difficult but again if the virus doesn’t have a host, then it goes away.”

As an epidemiologist, Clichee said the best thing they can do is stop the spread.

“Some of the most effective ways of stopping the spread are simple, such as staying home, washing your hands frequently and using hand sanitizer that is above 60% alcohol based,” he said.

As a PhD candidate for public health, Clichee also teaches prospective students who are in their second year of the master’s program.

“I also advise for a research center,” he said.

He’s the liaison for the Center for Indigenous Environmental Health Research, a research center that is looking at the concept of resiliency.

“It’s the ability to overcome adversity,” he said. “Growing up on the rez you have plenty of adversity. We see it in mainstream media. Unfortunately, in our area there are high rates of poverty and low educational attainment.

“But one of the things that they don’t highlight is our ability to survive as Native people,” he added. “It’s going back to the things that we learned on the reservation. It’s about never giving up – looking for that next opportunity and taking advantage of it.”

With the support from families and our culture, Clichee said the skills to be successful are built within us.

“They’re innate,” he said, while noting that those skills aided him in pursuing his educational and professional goals even though he struggled with leaving home.

“I think I still have some PTSD going to the Albuquerque airport, flying out of there even it’s for a job now that I’m an adult,” Clichee said. “That airport was always associated with sadness and, unfortunately, not wanting to leave home and leaving my family for five to six months at a time.”

But with self-discipline and knowing that there is an endpoint, Clichee understood that once he achieved one goal it opened up other opportunities.

“I knew that our tribal leaders and my family had talked to me that education is something that you have to strive for,” he said. “It’s the only reliable way to make an impact for your community.”

While talking to prospective college student, Clichee said they may not realize the significance of the journey they are about to partake.

“You have the ability to change the world and shape the future that you want to have,” he said. “When you go out there and strive, your success is going to leave footprints and that’s going to inspire others.”