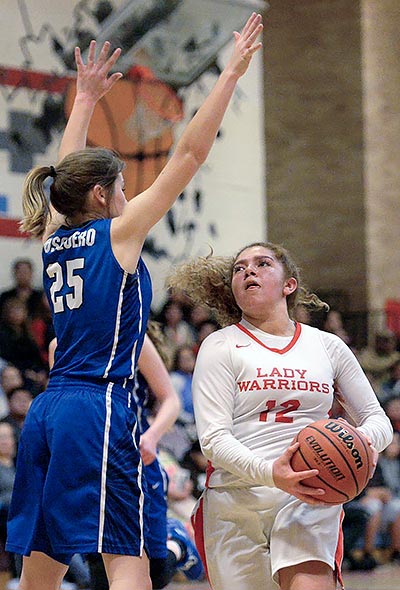 Pine Hill Lady Warrior Maurie Daniels (12) sets up to drive the ball against defending Roy/Mosquero Lady Longhorns on Friday in Pine Hill, New Mexico. No. 5 seed Pine Hill defeated No. 13 Lady Longhorns, 61-29, and they will play No. 5 Cliff on Wednesday.

Since taking over the Pine Hill girls’ basketball program, third-year coach Carlett Daniels has taken his team to the state playoffs.

On Friday, Pine Hill (26-2 overall) made history by advancing into the second round of the 1A state playoffs as the No. 4 seeded Lady Warriors used a strong second half to post a 61-29 win over the Roy/Mosquero squad, a team comprised of two schools since they are too small to have teams of their own. In fact, the duo schools suited up only 5 players in last Friday’s contest.

“At this level everybody deserves to be here, everybody wants to go to the next round,” Daniels said. “This will be our first time going to the next round … that was our goal, we’re thankful for the seeding and we just got to prove ourselves.

“Being a Rez school out in the middle of nowhere, you know we’re not going to get that respect, and I told our girls we get our respect on the court. We just got to work hard and show everybody that we can play ball.”

Even though the Lady Warriors won by a 32-point margin, the No. 13 seed Roy/Mosquero only trailed 16-11 at the half. The Pine Hill coach credited Roy/Mosquero coach Blair Clavel for handcuffing his team for the first two quarters.

“We got a good group of girls (but) I want to give some credit to the opposing team,” Daniels said. “(Clavel) didn’t let us have our fast breaks, he did a good job coaching, taking some of the things that we are used to.

“But it took a matter of time, we made our adjustments to it at halftime,” he added. “We have some good shooters, we have posts, we have a good group of girls and I’m proud of them. I’m thankful to be a part of their experience.”

Daniels felt that they shot poorly in the opening half as they went 1-for-13 from the 3-point line.

“We usually don’t shoot like that,” he said. “We got a little bit warmed up in the second half.”

Junior Hazel Begay got things going for Pine Hill as she spearheaded the Warriors by making 3 treys. Begay finished the contest with 12 points, as she was one of three players in double figures.

Junior Joy Pino posted a double-double during the contest as she finished with 19 points and 10 rebounds. Junior Cheyenne Harrison added 10 while Daniels chipped in 9 points and a dozen boards.

“I’m proud of my captains,” the Pine Hill coach said while alluding to Maurie Daniels, Pino and Harrison.

“My bench really stepped up,” he said. “Then my senior post, Tia DuBoise, she really stepped up and got some points in the paint. That’s where we knew we could challenge them right there. That was our focus. We stayed to our game plan and it worked.”

With the win, Pine Hill will take on No. 5 seed Cliff on Wednesday. Tipoff is scheduled for 11:30 a.m. at Bernalillo High School.

“I’m so thankful that we could do this and now they believe,” he said. “You have to win to continue on and we know the situation. I think we can give anybody a challenge.”