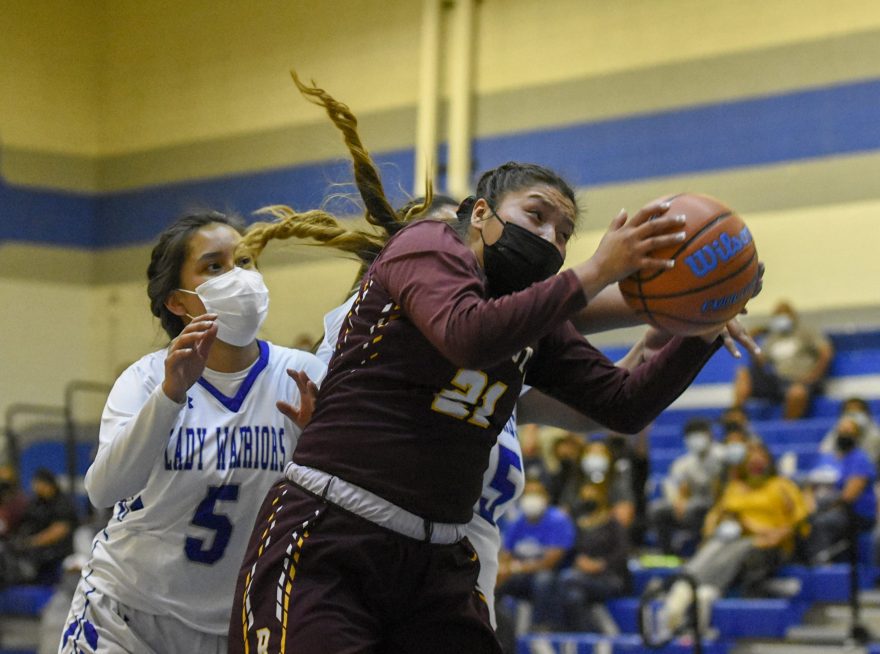 The Rehoboth Lady Lynx are headed back to the playoffs.

Rehoboth led from start to finish but they had to stave off a couple of Navajo Pine rallies to secure a 46-44 win on Friday night.

The two-point win earned the Lynx the District 1-2A title and a spot in next week’s New Mexico Class 2A state basketball playoffs, which starts on Monday.

The New Mexico Activities Association will announce the eight-team bracket on Saturday, as the top seeds will host the first round.

“We’re excited and we’re probably going to get the eighth seed,” said Rehoboth coach Adrian Pete, whose team improved to 4-4 overall and 2-0 in district play. “We’re going to play the No. 1 seed and that’s going to be either Mescalero or Pecos.”

Pete said making the playoffs is what every team strives for and he’s content that his squad gets a chance to extend their season. Nevertheless, he’s also reminded of the teams that didn’t have a season this year due to the ongoing pandemic.

In Friday’s win, the Lynx looked like they were in firm control after an inside basket by senior post Ashley Skeets. Her bucket extended Rehoboth’s lead to 41-33 with 3:21 left in the contest.

But in a furious rally, Navajo Pine crept its way back into the game, as senior guard Jordan Louis dropped in a pair three-pointers, shaving the deficit to 41-39 with over two minutes to play.

The Lynx gained a little breathing room when Skeets got her third basket to fall while Rehoboth guard Kendace Gilmore added a trey for a 46-39 cushion with 1:29 left.

The short-staffed Warriors didn’t go away as they scored five straight. Their rally, however, fell short.

“I’m so proud of these girls,” Navajo Pine coach Wilbert Nez said. “It wasn’t easy this season, especially coming off COVID. These seven girls have put in a lot of work over the past few weeks and for them to perform like that was awesome. We just ran out of time because we were coming back.”

Louis had a monster game for Navajo Pine, as she scored 13 of her 23 points in the fourth quarter.

“She started to find her range,” Nez said of his pupil. “She started driving to the basket and then coming back out she hit those threes. She was pretty focused in that final quarter and that was pretty exciting to see.”

And although his team played with poise down the stretch, Pete said he expected the Lady Warriors to give his team all they could handle.

“Navajo Pine is tough and, you know, Jordan was clutch, hitting those threes,” the Rehoboth coach said. “She’s one of those players that can do that and she’s done that to us the past four years so we were kind of used to it. We just didn’t let that get to us and we kept on playing.”

Rehoboth also got seven points each from Fiona Martinez and Ashley Skeets.

“I’m just happy that we won tonight, and we’re going back to state,” Martinez said. “Tonight’s game was really good and it was pretty intense.”

Of the eight games they played, senior Jessica Lee said Friday’s district contest was their biggest game of the season as the pressure to win was being felt.

“There was a little bit of pressure but we have that mentality,” she said. “Coach Pete gave us that mentality to where if we put our minds to it we can accomplish anything. This win gives us a chance to get back at it at state.”