The early returns for Star Anderson have been promising. 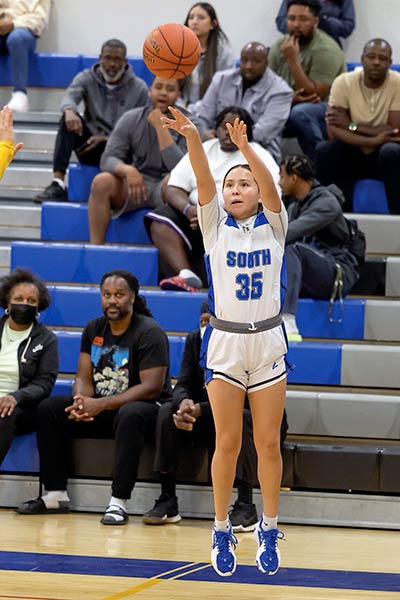 The sophomore has been a starting shooting or point guard – depending on where she is needed – and led the team with a career-high 19 points in the opening loss. She converted seven of 15 field goal attempts, including a team-best four three-pointers in eight tries.

She followed with 10 points in the next game, a win, matching her double-digit efforts from all of her first season, when she averaged 6.9 points in seven games.

Second shortest on the squad at 5-foot-4, Anderson said she got physically stronger by lifting weights and training at gyms during the summer. More running at preseason practices added endurance, and the fitness gains translated into her play style.

“I gained more muscle. I’m more aggressive, not shying away from the opponent,” she said.

During the summer, she practiced shooting at least four days a week to make herself an offensive threat from near and far. She prefers to shoot from the perimeter but continues working to improve her mid-range jump shots.

She has become confident in her inside attack on the basket.

“During practice, I will drive in more and see what the defense gives me,” she said, noting that if an open shot from the outside isn’t there, “I can drive.”

Anderson had the most field goal attempts in the two games and has tried to be more competent in her shot selection. Her 44% from the field ranked fourth on the squad, an early upgrade from a freshman season when she was second with 9.3 attempts per game but had a 23.1 field goal percentage.

Defensive, she had four rebounds and three steals in the opener. The team plays mainly man when she typically covers an opposing guard. When the squad plays zone defense, she said she is on one of the top sides.

Agility drills once or twice a week at practices, she said, have her feeling quicker on the court, especially in her lateral movement defensively.

“Staying on the ball more,” she said. “When I read their passes, sometimes I get steals. When they lift their arms, I know where they’re going to pass.”