Diné netters contribute in 5A, 6A title games 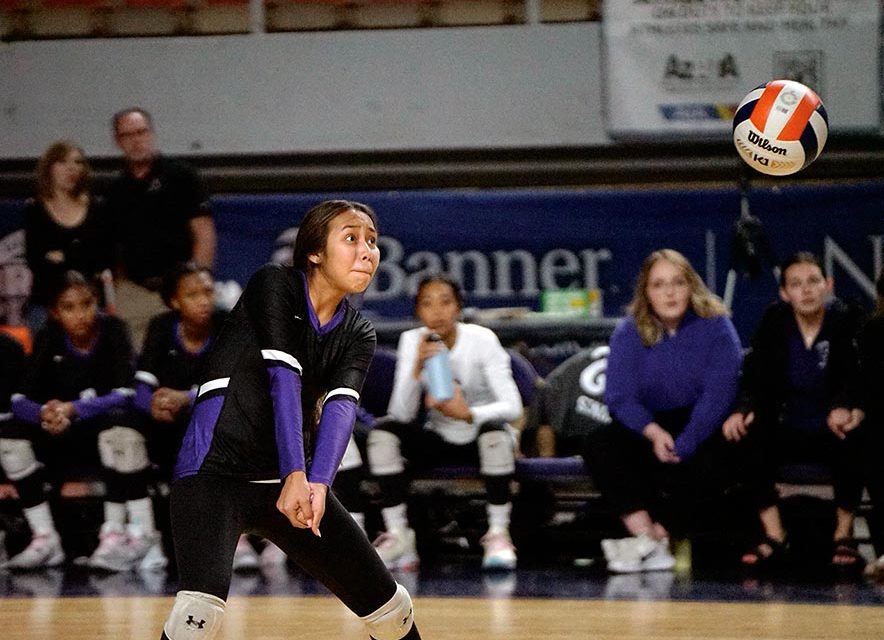 The Navajo Nation got strong representation on the final day of the Arizona state volleyball championships.

Five title games were decided on Saturday at the Arizona Veterans Memorial Coliseum, with two Diné athletes playing an integral part of their respective teams.

In the 5A championship game, sophomore Jordyn Dugi played a defensive role for the top-seeded Goodyear Millennium Lady Tigers.

In the 6A division, senior Melia Barlow, a transfer from Tuba City, directed the offense for the Chandler Hamilton Lady Huskies.

Both squads fell in the title game, with Dugi’s team losing in four sets to Scottsdale Horizon Lady Huskies, and Barlow’s squad came up short to Tempe Corona del Sol in a marathon match.

“It’s not the ending that we wanted, but I’m just super proud of my team,” Barlow said. “I’m super proud of the way we played because nobody expected us to be here.

“We’re such a young team,” she added. “We lost a lot of people last year, but we accomplished a lot this year.” 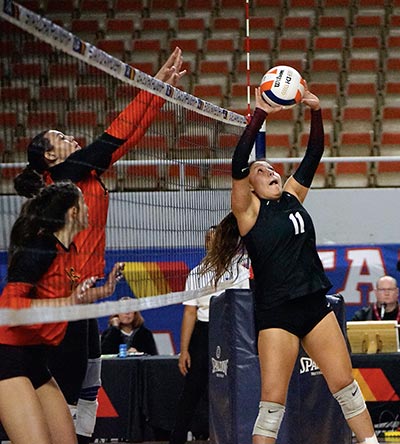 Navajo Times | Quentin Jodie
Hamilton Lady Husky Melia Barlow sets up the ball for a teammate in the Arizona 6A title game against Corona del Sol Lady Aztecs on Saturday.

Dugi said the match on Saturday night could have gone either way, but Horizon used a couple of runs to claim the state title.

“It was tough, and you could tell that we all wanted it,” said Dugi, who has family roots in the Shonto, Arizona, area. “We had energy, but the other team went on a few runs, and we just couldn’t get ourselves back out of it.”

“For the most part, we played pretty well,” she said. “We came out and competed. We just had too many lows. I always tell them that we have to minimize the lows and keep the highs more consistent.

“We had a lot of dips,” she added. “As soon as we had those dips and let them have those runs, it was a little troubling for us because we had to work ourselves out of a hole.”

Vastine said Dugi had been a varsity team member for two seasons, mainly as a defensive specialist.

“She started off as a libero for us, and she moved into a serving specialist role,” she said. “She does a really good job, and when she comes in, she has a really good serve.”

Vastine said having Dugi in there helps protect the team’s serve. For the season, she had a 96.5 percent serve rate with 33 aces, which is fifth-best on the team.

“That’s been her role this year,” Vastine said of Dugi’s serving ability. “She’s crucial to our team, and typically she’s out there for quite a while.”

In the title game, Dugi didn’t stay at the service that long, which Vastine attributed to the team’s mistakes.

“She wasn’t on the court as I would have liked her to be,” she said.

With Dugi being a sophomore, the Millennium coach said her pupil will try to fight for the libero spot, a position she played for the first half of the season.

“I’m very lucky that I have some pretty good defenders,” she said. “Each year, they’ll have opportunities to fight for that libero spot, and I expect her to be one of them because she’s very consistent and she’s very calm.

“She brings calmness to the court,” she continued. “That is another strength that she has when she comes on the court for us.”

Dugi said she’s looking forward to next season and hopes to bring more to the table.

“I really like playing for my team,” she said. “I feel like my defense has been strong, and next year I want to contribute more.”

For Barlow, she ended a stellar career at Hamilton, having served as the team’s starting setter for the past two years.

“I walked into this program not knowing anything,” Barlow said. “Coming from a 3A school, everything in 6A was so fast, which means I had to adapt really quickly.

“I accepted the challenge, and over time I gained a lot of confidence,” she said. “I’m glad that I ended up my career here at Hamilton High School, and for my senior year, I made team captain.”

“Melia is just awesome, and when she came in, and we didn’t even know if she’s was gonna be a setter,” Vanis said. “She’s just got better and better all the time. She’s been a good leader, a good competitor.

“As you saw tonight, she probably ran five, 10 miles,” Vanis said. “She’s been a solid rock for us, and she’s gonna be tough to replace.”

Like her pupil, Vanis felt that making the title game was out of reach, considering what they lost during last season’s championship run.

“I didn’t think we would be here,” she said. “That team (Corona del Sol) is loaded with seniors and talent. I mean, they had so many weapons, and we didn’t have as many weapons. We had young kids, and this is a big environment for them, but we’ll be back.

Playing against the greats

“I feel like I put my heart into every play,” she said of her exploits. “I put in the extra reps with my ball handling, and when I was a young girl, I watched Stanford play.

“I really wanted to be like them, and playing at the 6A level was really competitive,” she added. “It was awesome to play against these great players. They really helped me to strive to be the best player that I can be.”

With collegiate aspirations, Barlow said she’s still going through the process of signing onto play.

“I still plan on playing in college,” she said. “I’m still in contact with some college coaches.”