The Farmington girls ran it overall record to 11-1 on Tuesday night after beating previously unbeaten Kirtland Central, the top-ranked team in Class 4A. 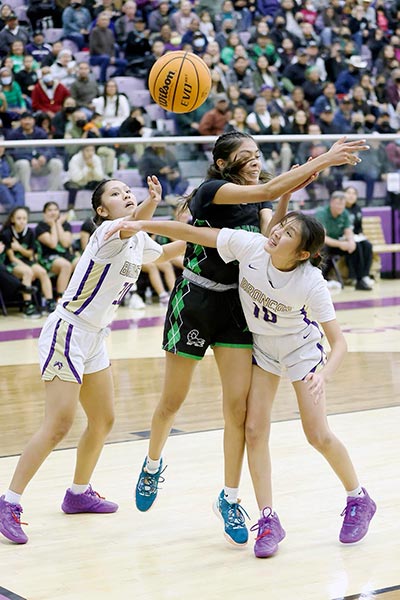 The 5A Lady Scorpions were a handful on the defensive end as they doubled up on KC 44-22 at the end of the third quarter before winning 52-43.

“Our man defense was the key,” first-year Farmington coach Tom Adair said. “That is what won the game for us. We had a 22-point lead and I put my bench in and I needed those kids to play.

“They work just as hard and they needed some playing time,” he added.

While he rested his starters, the Lady Broncos closed the game on a 14-0 run to pull within nine points.

“We didn’t shoot the ball particularly well tonight,” said KC coach Devon Manning, whose team dropped to 13-1 overall. “You know, Farmington’s defense was pretty tough, but I thought in the first half we missed some close range shots that we usually make.”

On top of that, Manning said, his club made 3-of-10 shots from the charity line.

“If we can make those shots early in the contest, then the hoop becomes a little bigger for those outside shots,” the KC coach said. “But when you’re trying to force those outside shots without ever making any other shots it becomes a lot more difficult, so yeah, we didn’t shoot particularly well tonight.”

Despite missing some key shots early on, KC trailed 13-7 after one quarter of play and at the half they were down 23-13.

The defending 4A champs opened the second half on a 4-0 run, but Farmington went on a three-point blitz with senior Kamalani Anitielu igniting a 21-5 run with three treys.

“They hit us quick with some 3s there,” Manning said. “They hit five 3s in the quarter, but again we started the second half pretty good. We were down six and then we missed a layup and that would have could cut it to four.”

“If we get some of those rebounds it changes the game a little bit,” Manning said. “But they were just very physical with us tonight and we didn’t handle that too well.

“I thought we were prepared, but we were not prepared enough,” he added.

Adair said being physical is part of their DNA and it translates from the defensive end to the offensive side.

“Our defense sets the tone for us,” he said. “As long as we stay out of foul trouble we’re OK.”

As for his team’s third quarter outburst, Adair said it was nice to see Kamalani Anitielu go off like that.

“We were getting good looks in the first half, but they just weren’t going down,” he said. “I told her to keep shooting and she made them.” 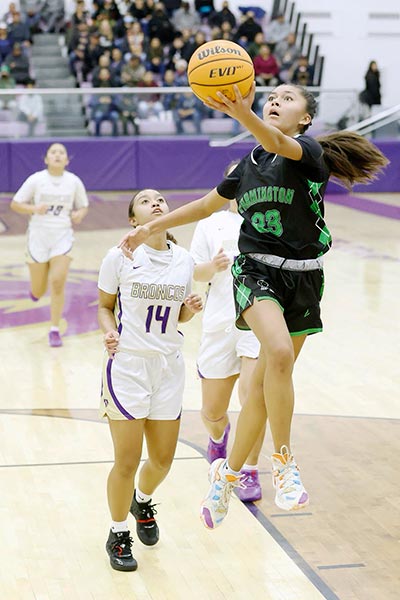 Kamalani Anitielu finished with a dozen points while younger sisters Kapiolani and Kjani Anitielu led the Scorps with 13 points each.

“Kapiolani took over the game for us,” Adair said. “Not just on offense, but her defense and her rebounds. I don’t know how many rebounds she had, but she had double figure rebounds.”

As for Kjani, Adair said his freshman guard played assertively.

“She attacked the basket and that is what I’ve been wanting her to do,” he said. “She drove in the ball really well.”

KC was led by junior Keira Beall-Gleason, who finished with a game-best 17 points.

“I don’t know if we’ll see another team as physical as Farmington when it comes to 4A, but I think we’ll face teams that are skilled as them,” Manning said. “Now, we have to look at how do we handle physical play.”

Manning said they saw that kind of physical play during the Goddard tournament last week against Roswell and the host school.

“They were both pretty physical with us and it took us a while to get going,” he said. “Eventually, we got around the physicality that they had.”

Prior to Tuesday’s game, the Broncos had won 13 straight to open the season, which includes tournament wins at Page, Moriarty and Goddard.

“We had some bumps on the road and the biggest thing about (Tuesday night’s) game is we didn’t give our best effort,” he said. “Up until this point I thought we answered some challenges that we had, but we still have a long ways to go.

“Right now, we didn’t play like a team that could win a state championship,” he added.