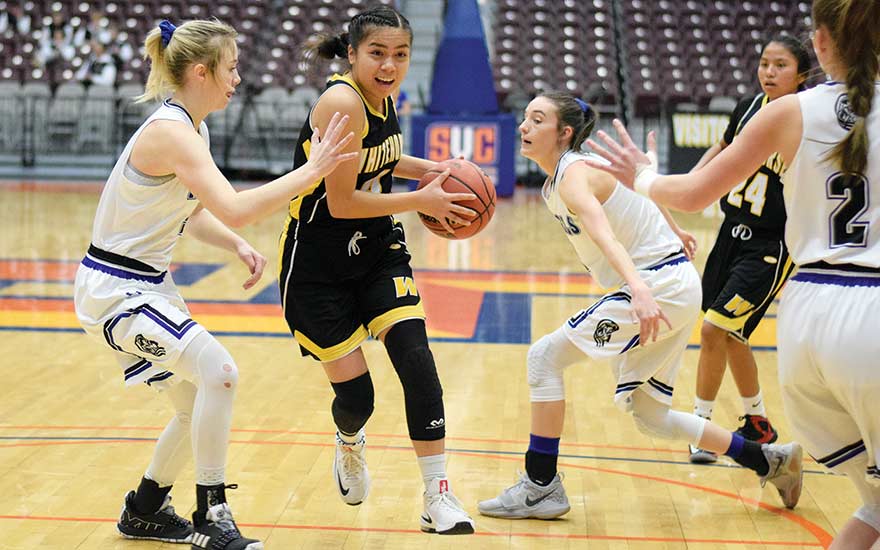 Progress has been made for the Whitehorse girls’ basketball team.

A year after winning seven games last season, the Lady Raiders caught some people off guard by making the Final Four round of the Utah 1A state basketball tournament.

Whitehorse went 2-2 at last week’s state tournament, losing to the top two 1A teams during the four-day state tournament. The Raiders finished in fourth place, improving their overall record to 17-9 for the year.

“A lot of people doubted us,” first-year coach Tiona Grant said. “They were saying Whitehorse is not going to make it there. They didn’t think we could make the semis but they underestimated my players and my team.”

Admittedly, Grant said making the field was quite an eye-opener since most of her girls hadn’t been to state. But after beating Manila in the opening round by a 62-46 count they gained the confidence they needed to reach Saturday’s third place game against Randolph Rich at the Sevier Valley Center in Richfield.

“Our girls were surprised that we finished in the top three in our region, and we got to state,” Grant said. “A lot of them are very young but winning our first game was just awesome.”

Grant said the important thing she reminded them was keeping their composure.

“I think that changed their mentality,” she said. “I told them that they deserved to be here and they showed it by staying composed.”

After beating Manila, Whitehorse faced a tough physical Bryce Valley team in the next round. Grant said winning that game took an epic performance from her team as they edged Bryce Valley, 37-33.

“It came down to free throws, she said. “We just had to make sure we made our free throws.”

With the win over Bryce Valley, the Raiders faced top-ranked Panguitch, a team that captured its 13 state title on Saturday. Winners of five of the last six state crowns, Panguitch defeated Whitehorse 53-37 in the semifinals.

“Panguitch has a lot of experience so my girls came out a little scared but we pushed through,” Grant said. “We kept up with them and I told them I was so proud of them because Panguitch has been dominating other teams by 40-plus points.

“We lost to them by 15,” she said, “and their coach told me that we were the only team to give them a challenge.

“That was a good compliment for our girls,” she added.

In Saturday’s third place game, Whitehorse stayed within striking distance to the Rich Lady Rebels from the outset as they came up short, 52-46.