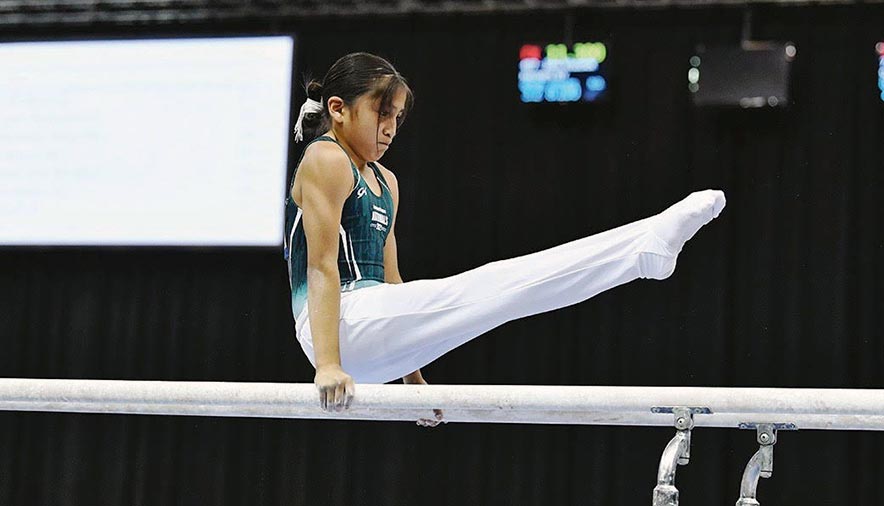 Submitted
Twelve-year old Shawn N. Yazzie, who is Navajo, Comanche and Sac & Fox, competed in the 2021 USA Gymnastics Development Program National Championship in Daytona, Florida two weeks ago. He is ranked 18th best in his age group national after this prestigious competition.

Two weeks ago Shawn N. Yazzie, who is Navajo, Comanche and Sac & Fox, competed in gymnastics on a national level.

At the 2021 USA Gymnastics Development Program National Championships in Daytona, Florida, Shawn won the third-place medal on floor and became No. 18 in the top 20 gymnasts in his age group, making him the 18th best 12-year-old gymnast in the nation.

This is just one of many honors Shawn has acquired over the years. He has many medals and trophies for state, regional and national competitions.

He is the No. 1 gymnast in Arizona for his age group, having won state back-to-back the past year. He’s competed in California, Nevada, New York and Florida. In addition, he has also made honor roll in his school for years.

“I like doing gymnastics because it helps me to get all of my energy out,” Shawn said. “I really enjoy it because I’m really good at it and I also enjoy doing it every day.

“My dad helps me a lot with it every morning,” he said. “My mom and dad have both invested a lot into me.”

Shawn’s parents put a strong emphasis on health, culture and heritage. Both his grandfathers served in the military and they passed on the responsibility to serve the people, as explained by his father, Shawn P. Yazzie.

“Farming, military, the Native American Church, that is the heart of who we are,” his father said. “So for our son, it sounds very extreme because many people I met, he just has a lot of demands.

“But that’s the case,” he said. “We come from a very disciplined, hardworking family so Shawn has that. He is very motivated, he’s the type of kid who loves doing stuff, he is very genuine because he loves it.”

The Yazzie family had traditionally played basketball or rodeo events, but Charmayne says her son is blazing a new trail.

“My family and my husband’s family are primarily basketball families so we all been able to play collegiately as well as against some of the top players in the U.S. so it has been awesome to be able to see Shawn take his own route,” his mother, Charmayne, said.

“To take his own sport,” she said. “It’s something he is passionate about. He’s just been able to create his own path and it’s been an amazing journey to take us on.”

Shawn was just five years old when he and his father were watching Olympic gymnasts perform on TV. The young Shawn then started playing with a medicine ball in the room and started copying the gymnast’s movements.

Seeing the joy within him, his parents decided to sign him up for gymnastics.

He describes gymnastics as a very disciplined sport that requires years of dedication. Survick has been working with Shawn for the past three years and sees the potential of a great athlete.

“I think one of the biggest things about Shawn is when he gets excited about a skill or a routine or whenever he is in a competitive environment, he really turns up his energy level,” Survick said. “He’s such a competitor who loves challenges and who always steps up to the plate when those moments happen.”

Shawn is probably best at pommel horse, but does well with all other events.

Gymnastics has helped him to better manage his time and release his pent-up energy. He dreams to be a bioengineer who studies the human body and hopefully becomes a professional gymnast.

This past year he ran into many difficulties due to the COVID-19 pandemic. He had to switch to virtual learning and the gym was closed for four months.

It was a lot later until Shaun would return to the gym as he didn’t want to risk exposing his grandparents to the virus.

He’d practice at home. Over the years Shawn installed home equipment for his son to train with.

Still, they were worried that the slightest loosening of the rigorous training could have an impact on Shawn’s performance.

With these new challenges this year though, when Shawn did return to the gym, he put himself into full gear and “worked his tail off,” as Survick put it.

He placed at state, then regionals and then finally to Daytona for his Nationals run. Despite placing in the top 20s, Shawn felt he could have done better.

“I was just very disappointed in myself that I’ve been one of the top gymnasts in America on this event but I couldn’t perform there,” Shawn said. “But at the end I pushed through it.”

Both Shawn’s parents and coaches are quick to point out how Shawn, despite having started training late, worked his way up to stand with the best in the nation is no small feat and he’s just 12 years old.

“As you can tell I’m a proud father,” his father said. “I tell him, ‘You did the work,’ because a lot of times I heard people say ‘he is very talented’ or ‘he is blessed’ and I’m, like, ‘No he has good genes.’ He comes from an athletic family.

“That’s what I tell him all the time,” he said. “You can look at it and says it looks easy but, no, he trains 20 hours a week. He is a very dedicated boy who has earned everything he has done and I’m going to celebrate that.”

Shawn is often the only Native competing in gymnastics. It is quite rare to see another Native kid and he is quick to befriend them. For the most part though, he is sometimes the first Native other gymnasts meet.

Shawn was brought up on Navajo traditions while also learning key cultural aspects from his Comanche and Sac & Fox cultures as well.

One thing that instantly draws attention is his hair, which he wears in a traditional bun at competitions. His parents grew it long when he was a baby and when he was old enough, they asked if he wanted to keep it or cut it short. Shawn opted to keep it long.

“Every single competition I’m tying his hair,” Charmayne said. “It’s a routine and a bond that I share with him.

“I always think about how my grandmother tied my hair at one point, then my mom tying my hair so its definitely a good bond for me as his mom to tie his hair and we’ve been able to do it in a whole bunch of different states,” she said, “here in Arizona, Nevada, California and Florida.”

However, Shawn would be teased and bullied about his hair, but he never let it bother him.

“All those long-haired Native kids out there,” Shawn said. “Don’t be sad if they call you a girl, I’ve gone through that and I don’t listen to that anymore.

“I just do my work and make sure after that I beat all of them,” he said. “It doesn’t matter what they think of you, all that matters is that if you beat them or if you are better than them.”

Coach Survick has no doubt that Shawn will go far as a gymnast and that he has a chance of making it to the national USA team.

“He is a great kid with a wonderful value,” Survick said. “We talked about how hard working he is and how much I appreciated his core values that his family, and the Navajo Nation have instilled in him.”

His parents believe Shawn is opening new opportunities for Native kids and is even becoming a source of inspiration for others, including his younger sister.

“Our people are normally a rodeo, basketball, military type of people,” his father said. “So, for Shawn to dream of going into gymnastics, we encourage that and I would encourage other parents to encourage their kids because who would have known that there would be a Navajo boy would go out onto the biggest stage and compete.”

Shawn’s heritage remains an important part of who he is as he continues to train for next year’s competition, play basketball on the side and spend time with his family should it be at home in Mesa or when he visits relatives on the rez.

“A special thank you to all my family and relatives in White Cone, Forest Lake, Tuba City, Jeddito and Lawton, Oklahoma,” Shawn said. “Thank you to my Cheii Pete Johnson and Masanii Laura Johnson for their love and teachings.”