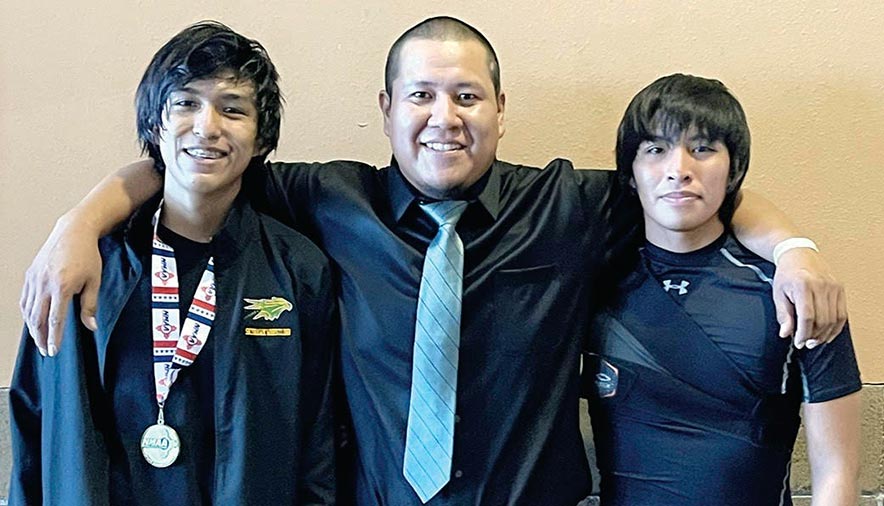 Logan Curley made his first appearance in a state title match an unforgettable moment.

“This has been a dream since I first joined wrestling,” said Curley, the Class 3A 132 champ. “I know my coaches are proud of me.”

“He broke that glass and now we know that we can do it,” he said. “It’s prideful to have a state champion in little old Newcomb.

“He’s our very first state champion in Newcomb’s history and you know as well as I do that these (wrestling) kids are the hardest workers in their schools,” he said, “so when they do this at a state level it’s something to be extremely proud of.”

As the tournament’s top seed, Chee was quick to point out that there was a target on his pupil’s back.

Chee said Logan deserved to be a state champion, especially after being forced to sit out last season’s state tournament due to a hand injury.

“That was real disappointing because we knew that he could have made some noise at the state level last year,” the Newcomb coach said. “We use that as fuel. That is what fueled us to get to this moment and he was fixated on winning a state title. He knew what he was capable of and he showed everybody.”

Entering the state tournament, Curley captured the district crown and he said that gave him some much-needed confidence.

In his first match he pinned Las Vegas Robertson Eduardo Mello to reach the finals.

And in the championship match, Curley came up with some takedowns and reversals to gain an early 8-1 advantage before surrendering three late points to Armijo.

“It was a tough match and I was pretty nervous,” he said. “I was able to calm down.”

Curley said his opponent made him work to build that early lead as he labored to breathe through his mask, a mandate for all wrestlers to wear during competition.

“It was pretty hard because he out-strengthen me a bit,” he said of Armijo. “At the beginning of the match I started breathing too hard and I started to get a side cramp. I calmed down and I got my breathing back on track so I could keep wrestling.”

And although the season was only a few weeks due to the pandemic, Curley said he was grateful to even have a season.

“I wasn’t sure if the whole season was going to continue but I’m glad to be here and I’m glad I won a medal,” he said. “I like to thank my coaches for believing in me, for pushing me and giving building my confidence all year.”

The Skyhawks also had one other state qualifier with junior Brandon Begay placing fourth in the 152-pound weight class. Unfortunately, Begay got hurt in his semifinal match, as he had to forfeit his third-place match.

“He’s a really tough kid but he was hurting,” Chee said. “And when he couldn’t walk on it I had to believe him because he’s strong. I’ve seen him pop his shoulder out and get back on the mat.

“It was kind of bittersweet for him because we knew that he could make some noise at the state level,” he added. “I want him at 100 percent for next year because he’s only a junior.”