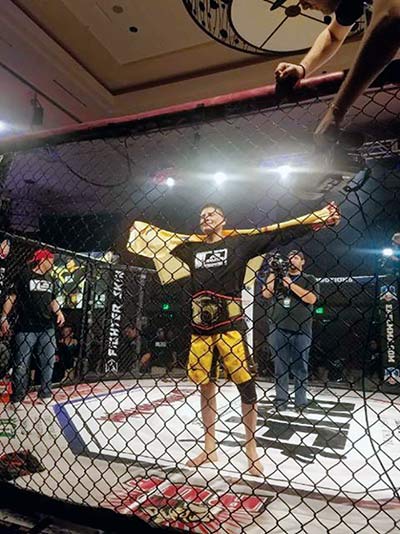 After winning the professional lightweight title earlier this year, Randy Yellowhair is ready for more.

The 33-year-old professional MMA fighter won his Ringside Unified Fighting Promotion fight in early March at Twin Arrows Casino. Now, in Prescott Valley, he will take a shot at a second professional lightweight title at the World Fighting Federation Promotion on Aug. 9 at 7 p.m.

Yellowhair said he’s simply out to prove he is a champion.

“I’m just out to prove that this is my second championship – I’m ready,” he said. “I’m knocking on the UFC’s door. I’m not going anywhere. I want to prove to everyone that this is where I should have been a long time ago.”

Yellowhair started his career wrestling at Chinle High and discovered MMA in college. He has since dedicated himself to the sport.

Yellowhair said he’s matured as a fighter and it’s helped him remain committed.

“A lot of it has to do with my training,” he said. “I’ve really, really noticed my training going up and I started to believe in myself, knowing that I could do it … it was my biggest motivator.”

In Yellowhair’s his first fight at Twin Arrows Casino, he got a taste of what it was like to compete in front of a home crowd and winning.

“It was just amazing, just to hear everybody chanting my name, to see everybody I knew, all my friends, and family out in the stands,” he said. “Not only was it friends and family, there were other Navajos there too. I found out that I have a fan base.”

Yellowhair, who works, lives, and trains in Utah, has found a new comfort in fighting close to home.

He hopes he sees some familiar faces and fans this weekend.

“If they can make it out to basketball games in Prescott, they can definitely make it out for the fight,” Yellowhair said.