Chee’s new album a gift of peace and joy

Courtesy photo | Connor Chee
Pianist/composer Connor Chee is surrounded by the amazing scenery of Western Navajo as he performs in this music video from his new work "Scenes from Dinétah."

This is a hard Christmas for gifting.

A tie? Nobody’s been out of their sweats for months.

Earrings catch on your mask straps.

Tickets to a concert? Ha ha.

What we really all need now is some peace, beauty and joy. But you can’t buy that, right?

Well, you sort of can. Those three nouns kept swirling in my head as I listened to Diné pianist and composer Connor Chee’s recent album “Scenes from Dinétah.”

These short (two- to four-minute) vignettes of Navajo life filled me with a sense of gratitude that has eluded me all year as I crunched the COVID numbers and endured the most divisive election season of my 40-year career.

It’s always a joy to watch Chee caress the keys, but situating his piano in the middle of a sheep pasture, overlooking a canyon or in a cozy hogan, alternating with the gorgeous scenery of Western Navajo, was a stroke of genius.

Luckily, unless you ask Chee about it, you don’t get a sense of how much work all this was.

“It’s actually just a piano shell to hold my keyboard, but it’s still pretty heavy,” Chee said. “The first truck we used broke down and we had to buy a bigger truck.”

This year’s exceptionally hot and dry summer did not help. “At one point, Michael got a mild case of heat exhaustion from lugging the piano around,” Chee recalled.

“I was sweating and thought I would look terrible in the videos, but Michael worked his video magic and I was really happy with how they turned out.”

Like all Chee’s music, the pieces in “Scenes from Dinétah” are transportative. You can’t help but breathe a little deeper when listening to “Stars” or “Female Rain,” or smile at the rolling scales invoking bubbling oil in “Fry Bread.”

For me, the short pieces are a good reset button between stories or stressful interviews.

Chee, who is bilagáana born for Kin Yaa’áanii, said he tends to write short pieces because he bases a lot of his work on traditional Navajo songs.

“In Navajo music, modulating into a different key is not something that happens, so if I write a bunch of short pieces, I can use a lot of different keys,” he explained.

The 33-year-old musician/composer’s earlier works were based on the Diné creation and emergence stories, so for this collection, “I wanted to write something based on how Navajos are living now.”

He envisioned it as a “visual project,” and the pandemic actually provided some serendipity. “Michael (whom Chee had known since they were kids who had the same piano teacher) had been living in the Philippines and was ready to go back there when COVID-19 hit,” Chee said. “He ended up staying with us and did the videos, which was great because they wouldn’t have been nearly this professional if I’d done them myself.” 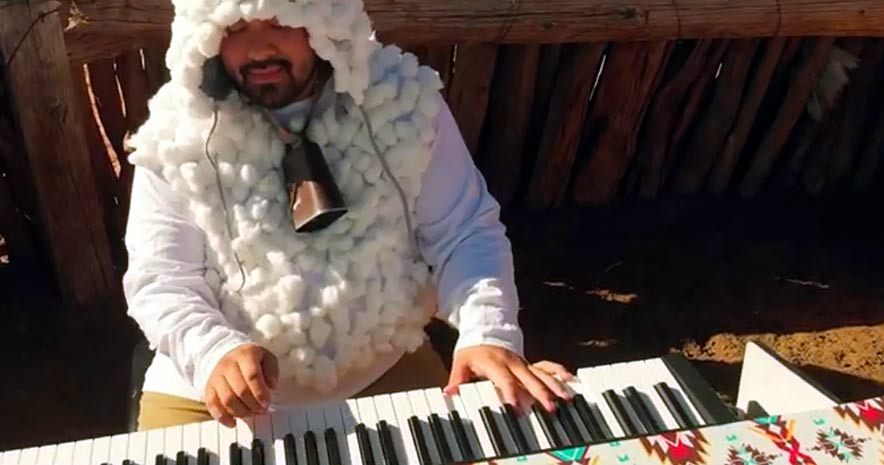 Courtesy photo | Connor Chee
Pianist/composer Connor Chee of Phoenix injects an element of humor into the video for his piece “Sheep” from “Scenes from Dinétah.”

One thing Chee did have to do himself was learn how to play the Native flute, which is used behind short spoken-word introductions to each piece. “Normally I would have found someone to play the flute, but with COVID, there was no good way to work together,” he said. “I’m not the best flute player, but I think I was good enough for what I wanted to do.”

Chee also accompanies himself on “Pathways,” which is a piano duet.

All Chee’s music is downloadable for free on his website, but he does ask his listeners to pay at least $9.97 to download “Scenes from Dinétah” or $15 for the CD, just to keep him afloat until he can start playing concerts again.

“Usually musicians sell the most CDs at live concerts,” he explained. “People want to take home something tangible to remember the experience.”

Although “Scenes” hasn’t been particularly lucrative so far, it has gotten a lot of radio time and recently grabbed the No. 3 spot in the Zone Music Reporter’s top 100 pieces for the month of September.

The attention has gotten Chee some other gigs … “I’m currently working on two commissions,” he confided. “I think that’s the best thing you can hope for as a musician right now, is that people share your music and it leads to other projects.”

Information: connorchee.com; search for “Scenes from Dinétah” on YouTube.com to see the videos.