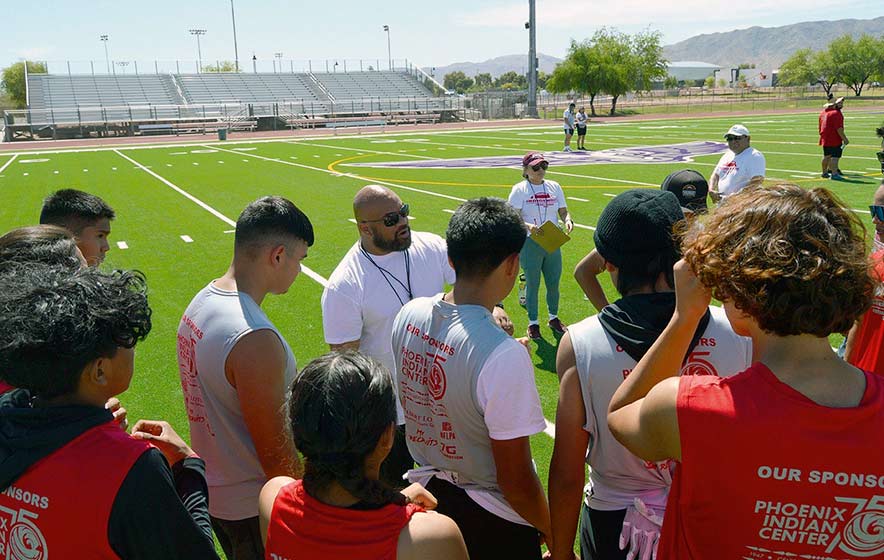 Special to the Times | Candace Begody Warren Tauanuu, from the 7G Foundation, explains the next drill during the Indigenous Football Combine, hosted by the Phoenix Indian Center over the weekend. The event brought over 70 Indigenous athletes from across Arizona, California, New Mexico, and South Dakota to the Cesar Chavez High in Laveen, Ariz.

When Nicholas Fulgham pitched the idea to Phoenix Indian Center leadership to host the first Indigenous Football Combine, everyone got on board.

“I have a son who is going through the college recruiting process for football, and for him to get seen by college coaches and scouts, we have to attend a lot of camps to get that exposure,” he explained. “It was always lingering in the back of my mind that this would be an amazing opportunity (to) highlight Native athletes in football.”

The Phoenix Indian Center leadership “loved the idea and allowed me to work with the team to build the Indigenous Football Combine,” added Fulgham, from St. Micheals, Arizona, and a graduate of St. Michael High.

“I wanted the athletes to know that their football talents are noticed and they deserve an opportunity to have those talents showcased,” he said.

“Rez ball is king in rez life, but there is also real football talent often overlooked within these communities,” he added, “and I hope they walked away knowing that they had an opportunity to showcase their football talents.”

With that in mind, the Phoenix Indian Center hosted its very first Indigenous Football Combine over the weekend, bringing together over 70 athletes from across Arizona, California, New Mexico and South Dakota at Cesar Chavez High.

“The event allowed Indigenous high school athletes to have a platform to showcase their skills and talents with other football athletes from around the state and the country,” Fulgham said.

“It allows them the opportunity to possibly get noticed by colleges and use football to get a college education (and) helps build knowledge, experience, and an opportunity for this knowledge to be passed down and make football recruiting easier for future gridiron athletes,” he said.

“Basketball and running are popular sports for Native athletes but there are other sports that we have skilled athletes in and we, asked, ‘How can we highlight them?” said the center’s CEO, Jolyana Begay-Kroupa, adding that the combine fit in with its programming. 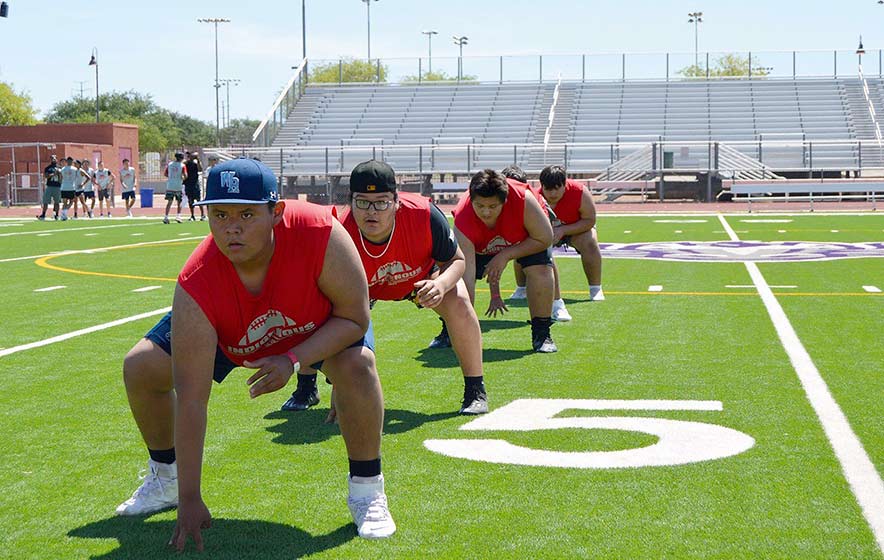 Special to the Times | Candace Begody
Offensive linemen get in their stance as they work on a number of drills during the Indigenous Football Combine, hosted by the Phoenix Indian Center over the weekend.

“We have team members who were knowledgeable and have contacts,” she said, “and we got an overwhelming amount of support and people that wanted to highlight the underrepresented. It was really neat to see.”

The coaches and mentors ran drills in the morning including the 40-yard dash, the 5-10-50 shuttle, power ball toss, broad jump, and 1-on-1 competitions.

The athletes also participated in workshops in areas of college recruitment, leadership and discipline, motivation, and topics on what it means to be a Native athlete.

Toby Wright, who attended Dobson High in Mesa, said he was on board as soon as he got the call.

“This is the first Indigenous combine – my service is the kids and from the very beginning, I wanted to be in,” he said. “I came from humble beginnings, and someone took the chance on me.

“The criteria for winning is just never give up,” Wright said of teachings he hoped to instill in the young athletes. “You will always get knocked down and that is what happens throughout life but as long as you don’t quit, you won. Give your all and we all leave here winners.”

For majority of the athletes who attended, it was their very first combine.

“I really liked it. It was a lot of fun,” said Connor Shirley, who traveled from Page where he plays wide receiver for Page High’s football team.

“They taught us about our mindset and encouraged us to keep focused,” he said. “There is some good competition out here today. I liked the drills and I would like to teach my team back home about having a strong mindset.”

“It has been pretty fun,’ she said. “My favorite was the 40-yard dash. They taught us to always have fun and show up, always work hard and do all things good.”

Of the event, Fulgham added, “It was amazing to see the support systems from the families that showed to watch their athlete compete and buy into the event.

“The people that we had working and donating their time to make this combine the event that it was made it very special to me personally and more impactful for the athletes there,” he said. “It was just an amazing turnout, and I couldn’t be happier with how the day went.”