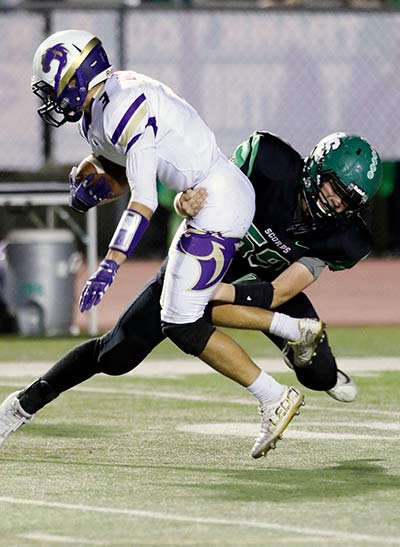 Special to the Times | Curtis Ray Benally Farmington Scorpion Eddie Pacheco tackles Kirtland Central running back Jaedan Alfred in the back line for lost yardage in the fourth quarter on Friday at Hutchison Stadium.

Special to the Times | Curtis Ray Benally
Farmington Scorpion Eddie Pacheco tackles Kirtland Central running back Jaedan Alfred in the back line for lost yardage in the fourth quarter on Friday at Hutchison Stadium.

The Broncos posted a 40-14 win over the Scorpions.

Kirtland Central High School head football coach Greg Jenks said it looked as if his team was making a turn for the better as well.

Jenks said his team didn’t come out as strong in the second half of the game but they did what they could on defense.

“It was a little frustrating, but we still played well and still made plays” he said. ‘Our defense once again played really well.”

Farmington scored all 14 of their points in the final quarter, but it wasn’t enough to catch the Broncos.

Kirtland Central closed in on the win and earned themselves their third straight win of the season.

Jenks said his team still has a long way to go as they prepare for the district season and postseason.

“We feel like we’re a little behind, we’d like to be a little further than we are right now,” he said. “Obviously, the last three weeks have been really good for us, but the boys and coaches have high expectations. We know we still have a lot of work to do, so we’re not where we’d hope we’d be right now, especially offensively.”

The Broncos will have an off week this week and will pick up next week when they travel to Moriarty. Kirtland Central is now 3-3 overall.