‘One game at a time’: MV Mustangs looking to win 3A North 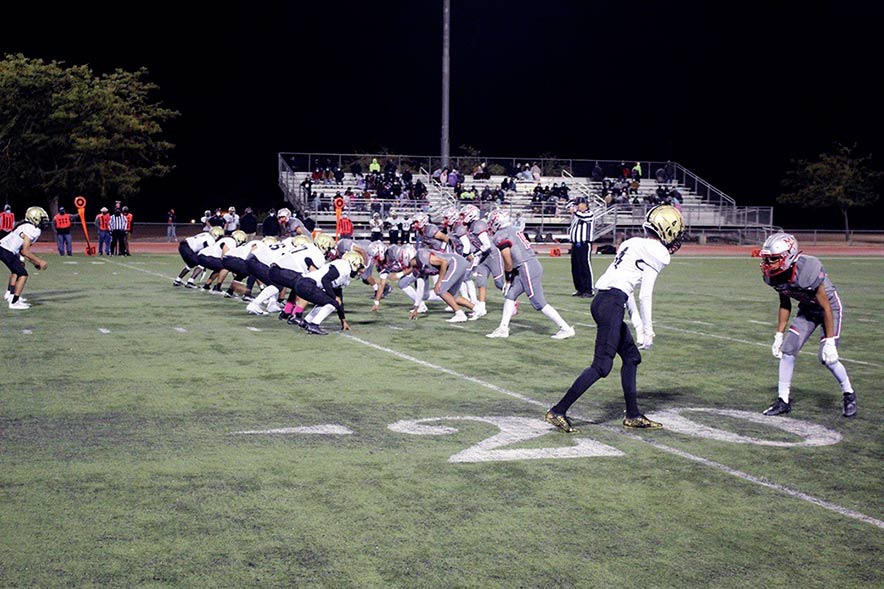 Submitted The Monument Valley and Chinle football team lineup before a snap on Oct. 9 in Kayenta. The Mustangs won 67-0.

Monument Valley on Friday night had to make a lot of adjustments to its homecoming because of the coronavirus pandemic.

This year they marked the occasion with a spirit assembly for the students and their football game against the Chinle Wildcats.

“I’m glad we get to play football and right now its good the community is loving its football team,” Begay said. “Hopefully we move up in rank, we got to take it one game at a time. Our goal is to win the 3A North championship. This team has that ability to do so.”

Dark clouds barely moved away from the field after a heavy rainfall and cold winds started blowing, freezing the players before the start of the game. However it didn’t dampen the Mustang crowd’s enthusiasm as they cheered on their team from full bleachers.

The Mustangs dominated the first half with Devaughn Poorman, Roberto Flores, Andrew Sheppard and Albrandon Byjoe running in touchdowns.

Sheppard completed 5-of-7 passes, one of which was a near 20-yard throw to Jamarius Whitehorse.

Chinle came close to making a touchdown when the Mustangs fumbled and Wildcat Zack Toadlena recovered it and ran 60 yards to the end zone, but the touchdown was called back by a penalty.

The Wildcats tried to regain the initiative with Tsosie attempting to throw the ball over the Mustang’s defense, but of the 10 passes he made, only three were completed. During the second quarter, Mustang Blaine Begay broke through the Wildcat’s defense and sacked Tsosie.

There were four turnovers, two by Chinle and two by Monument Valley. By halftime the score was 42-0 in favor of the Mustangs.

While the athletes were resting, MV announced its homecoming royalty. They also had a mini-parade with students pulling decorated wagons around the track in place of the usual parade held during homecoming.

During the final half, Chinle tried to strengthen their defenses against the Mustang’s onslaught.

Monument Valley made three more touchdowns with Whitehorse making the final score in the closing seconds of the game. They also made two interceptions, made by Mustang’s Tashawn Miles and La’Vahtty Beverly. Sheppard made three complete passes of the game and the team forced one turnover.

Tsosie made two completed passes out of five attempts during the final half of the game. The teams also had to contend with the weather as strong winds resisted their throws and blow the ball off course.

The match ended with Mustangs winning 67-0.

Although the Mustangs ran away with the score early on, Begay said the team was weary of Chinle’s Luke Jones and they made sure to cover receiver Tim Clark, seeing them as some of the best players on Chinle’s team.

As for his own team, Begay sees Sheppard as one of the best players and possibly the best runner in the region. He also credits Blane Begay, Tyson Atene, Jevonte Cody and Caden Kescoli, stating that their experience and leadership helped shaped the team and secured their season’s victories.

“This is a accumulation of the four years of work for the senior class, there’s 21 of them that I’m proud of that we coached from then to now,” Begay said. “I told our kids, ‘You play for them and enjoy your last homecoming and you go out and play Mustang football,’ and that’s what they did. Everyone got to play, contributed to a great crowd tonight, class act from everybody all around and Chinle played tough tonight too.”

Begay said he was happy, not only with the game but with the season overall. He is glad that he and other Monument Valley sports teams are able to play this year despite the pandemic.

The MV teams are looking forward to their next match as they focus on climbing the ranks and winning the 3A North conference.

Chinle coach Alan Barwick said his team did its best and assures that the team will be focusing on training and improving for their next game on Friday, which would be Chinle’s own homecoming.

Monument Valley is now ranked No. 14 in the state and No. 1 in the 3A North region.

Chinle is ranked No. 5 in the 3A North Region and will be hosting their own homecoming this coming Friday against Window Rock.