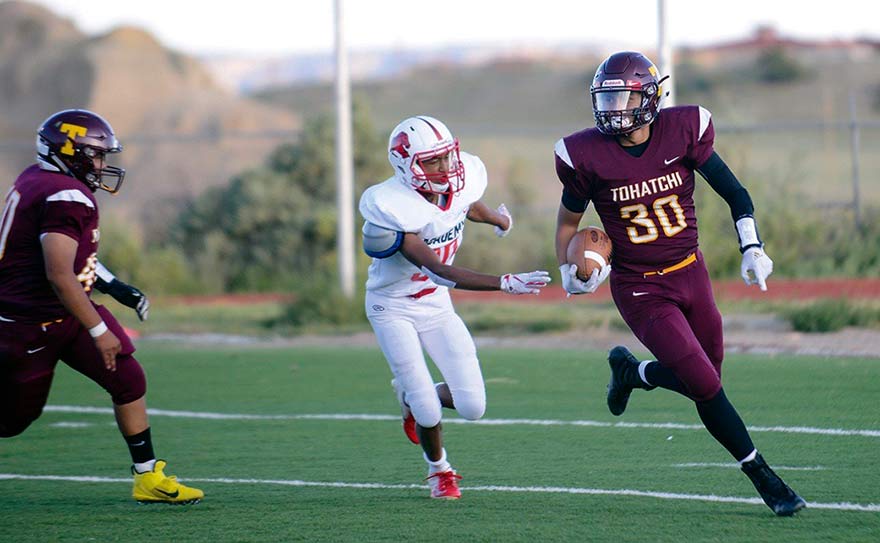 By his estimation, Benally said his team coughed up 12 penalties as they came up on the wrong end of a 9-0 ballgame against the visiting Albuquerque Academy Chargers.

“We kind of gave that game away on penalties,” Benally said.

While trailing 2-0 with under a minute left in the contest the Chargers tacked on a late TD and that score was a result of penalties.

In Academy’s final drive, the Cougars were whistled for four infractions.

“I think we gave up 40-plus yards on that drive,” Benally lamented.

The Cougars were penalized for unsportsmanlike conduct, roughing the passer and two offside infractions.

“It was an emotional game and those penalties late in the game happened because we wanted to get the ball back on the offensive end,” Benally said. “I think the boys just got too riled up.”

For much of the contest, the Tohatchi coach said they kept the game manageable as they gave up a safety in the opening quarter.

The Cougars, however, had two scoring opportunities erased. The first one came late in the opening half as

Tohatchi got as far as Academy’s 25-yard line but their TD was called back due to a holding call.

Their second scoring opportunity was negated when the defense was assessed a penalty just as Tohatchi intercepted the ball.

“We would have gone 90 yards for a touchdown,” Benally said.

Benally said those penalties were momentum killers but overall he was pleased with how his kids played.

“I think we did very well,” he said. “We moved the ball on offense, and the defense they held them for most of the game until the fourth quarter.”

Benally said his starters on the defensive end played a big role in keeping the score low.

“I had multiple players that stepped up,” he said “Our line, linebackers, cornerbacks and safeties pretty much contributed to our overall play.”

“It was a well-rounded team effort,” he said.

Behind the line of scrimmage, Benally said sophomore quarterback DeAnglo Hunch completed more than half of his pass attempts.

“I think he did really well,” Benally said of his QB. “He did very well even under pressure. We just need to work on him getting rid of the ball and not picking up minus yardage as far as scrambling.”

Benally said his QB could have completed more passes but his receiving corps dropped the ball a couple of times.

“That is what we need to work on but this was our first game of the season,” he said.

The Cougars is scheduled to play Laguna-Acoma on Friday in their next contest.