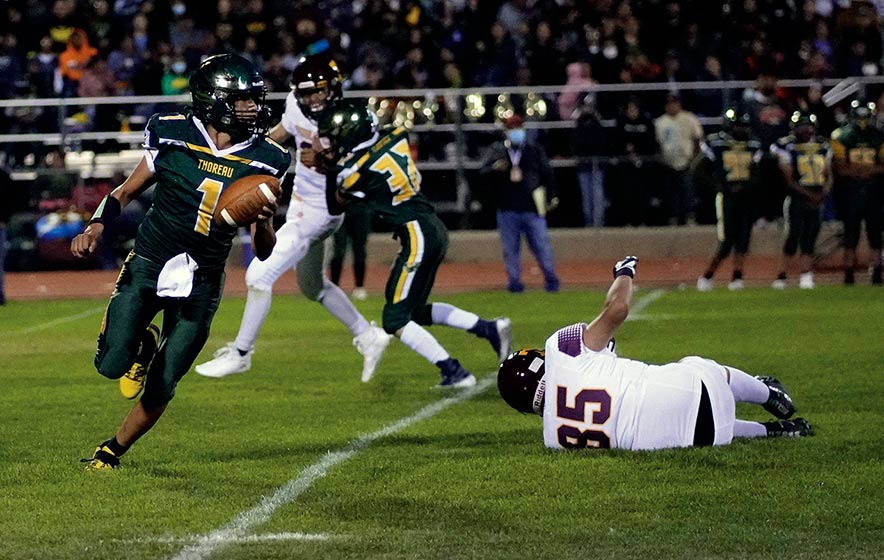 A 58-yard dart by junior running back Ray Long set the tone for the Thoreau football team.

Long covered that distance on the first play, and on the ensuing snap, he rushed for a 5-yard TD run.

His athletic agility opened up the passing game as the Hawks improved to 4-2 overall after beating archrival Tohatchi 48-6 last Friday on homecoming night.

“He set the tone for us, so they had to make adjustments,” Thoreau coach Erik Loera said of the visiting Cougars. “They started to plug the inside, so we had to run outside, and then we opened up our pass plays, and we realized that ‘Hey, we can pass.’ We’ve been trying to do that the last few games, and it’s been lacking.”

Long finished the night with 160 rushing on 12 carries and two TD scores. The junior running back was unavailable for comment as he got banged up.

“He got hit a couple of times, so we’re going to keep an eye on him,” Loera said. “One of his relief wasn’t able to play tonight, so he played a lot tonight.”

Thoreau had eight other players carry the ball in the lopsided win. Junior quarterback Isaac Bear Eagle gained 85 yards on seven carries and one TD, and Cassius Burnside and Mateo Loera both had 35 yards.

Bear Eagle had a stellar night throwing as he made 13-of-18 passes for 112 yards and two TDs, a 25-yard scoring strike to Burnside, and a 6-yard TD pass to freshman Jordan Calladitto.

“Isaac Bear Eagle had a hell of a game passing,” Loera said. “I think he was perfect for a while, and he impressed me.”

The Hawks were coming off a 54-0 defeat to West Las Vegas, a game in which Bear Eagle had three interceptions.

“We didn’t want to lose again, so came out mad,” Bear Eagle said. “We were liked pissed off, so we wanted to win.”

The junior QB said his O-line gave him space and time to work with in last Friday’s win.

“They gave me all the time I needed,” he said.

After Thoreau scored on its opening drive, the Cougars answered with a 60-plus TD drive, which was aided by two costly penalties by the host team.

Thoreau was assessed 30 yards with a pass interference and facemask penalty, with Tohatchi taking full advantage.

The Cougars pulled within 8-6 at the 7:43 mark of the opening quarter when sophomore QB Elijah Johnson connected with one of his receivers for a 27-yard strike.

After that, it was all Thoreau, as the Hawks opened up a 36-6 halftime cushion with Long scoring from 4 yards out and Bear Eagle hitting paydirt with a 27-yard rush.

Sandwiched between those rushing scores, senior Ryland Garcia returned a fumble for a 43-yard TD.

In Thoreau’s final scoring drive before the half, the Hawks went 53 yards after recovering another Tohatchi fumble with Bear Eagle hooking up with Calladitto for a 15-yard TD toss.

“The defense did a hell of a job,” Loera said. “We pressured them, but as you know, we had few missed blocking assignments to where we could have ended this game before halftime.

“Those things can be fixed, so we still have room for improvements,” he added.

After exchanging punts and turnovers to start the second half, Thoreau marched 59 yards with Bear Eagle converting a fourth down conversion with a 6-yard TD pass to Calladitto.

“We had one of our players get homecoming queen, so I let them stay out there at halftime to cheer on Leah Delgarito,” Loera said. “It might have been my fault to keep them out there because we lost focus, and it took them a while to get them going.”

With the game out of reach, the Thoreau coach played his reserves, and they completed a 63-yard drive, with sophomore backup Stetson Perry completing the drive with a 6-yard toss to freshman Noah Trickey.

“We gave our underclassmen an opportunity to go out there, and they scored,” Loera said.

Thoreau will travel to Newcomb for its last non-district game of the season before opening up District 5-3A play at Cuba next week.

“Newcomb has a pretty good team this year, so we’re gonna watch some film on them,” he said. “I think they’re like 4-1, and they have a new coach from Texas, and he’s turning that program in the right direction. I respect what he’s doing, but we’re going to take it to them.”

After the Cuba matchup, Thoreau will finish the regular season hosting Crownpoint on Oct. 21 and Wingate on Oct. 28.

Loera said his squad is going in the right direction heading into the district season.

“I don’t think there’s any team that can compete with us in our district,” he said. “Print that because I want those other teams to come and give us a good game.

“I don’t want to run them over like we did tonight,” he added. “I want to be challenged so that when we go into state, we’re ready.”