Going into his senior season, Dartmouth College tight end JJ Jones was looking to be a contributor for the Mean Green football team. 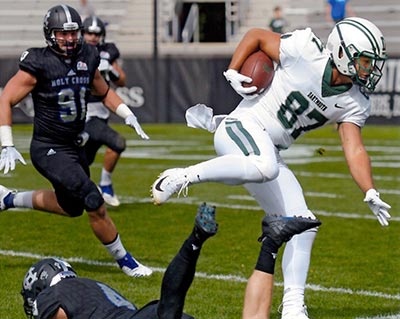 Submitted | Dartmouth Athletics
Dartmouth tight end JJ Jones, a Diné, avoids a tackle in a game against Holy Cross during the 2018 season. The Big Green won a share of the Ivy League title last year with a 9-1 record.

Last season, Dartmouth won a share of the Ivy League title with a sparkling 9-1 record and Jones was hoping to help continue that trend.

Those plans will have to be placed on hold as the Ivy League announced the cancellation of all fall sports for the upcoming semester due to concerns of the ongoing COVID-19 pandemic.

A decision will be made at a later date if the football season can be salvaged during the 2021 spring semester.

“As a senior I was hoping to be a bigger contributor on offense and special teams,” said Jones, who is half Navajo and half Anglo. “I think my coaches were looking for me to do that and I was hoping to follow through with that.”

“Their reasoning was they wanted to create a more balanced environment of students who were successful at fulfilling athletic pursuits and students who fulfill other pursuits,” he said. “Basically, they’re saying they want to make more room for non-athletes, which is OK. But I think they shouldn’t have cut those programs.”

Jones, who took part of an abbreviated internship with Lawrence Livermore National Laboratory in California this past summer, grew up in Tracy, California. His parents are James Jones Jr. and Tiah Fehling and his grandparents are James Sr. and Lisa James from the Chinle area.

With the pandemic, Jones said he’s trying to stay positive as much as he can. And while the upcoming football season is in limbo, Jones said he still needs two more years to complete his bachelor’s degree in mechanical engineering.

“Our engineering program is five years long,” he said, noting that Dartmouth does offer a four-year degree for all of its engineering students.

According to the school website, all engineering science majors are enrolled in a bachelor of arts program (AB), which takes four years to complete. But students who wish to pursue a Bachelor of Engineering (BE) degree will take additional course to complete the necessary course work.

“Even if we don’t have a season I still have a fifth year of eligibility,” Jones said. “I’m looking at this as a blessing to where I can take more time to develop physically and keep working on my game by watching film and studying the playbook.”

Admittedly, the California Diné native said it’s hard to stay on track since he has no access to a gym.

“I’ve been working out from my garage,” he said. “I don’t have a world class gym at home but I’m trying my best to do my workouts.”

Jones said he has a small bench press at home to do lifting. He sometimes adds weights to his backpack to do pull-ups.

“With what’s going on it’s taught me to be more creative with my exercises,” he said. “For the most part, I’m able to get most of my exercises down with what I have in the garage.”

While in high school, Jones said he had other recruiting opportunities but he settled on Dartmouth based on its “high standards” in both academics and athletics.

“I knew I wanted to play football in college and right now I’m really enjoying my time at Dartmouth,” he said. “I’m taking advantage of the academic part while playing football.”

Jones said he’s grateful to have made the football team and he credits the balance he’s developed at an early age as a way to transition to the rigors of attending an Ivy League school.

“It’s something that I’ve gotten used to,” he said. “I’ve played multiple sports growing up and the hectic lifestyle between school and athletics as allowed me to have a more structured lifestyle. Having a busy lifestyle has always kept me grounded and I really like that.”

Jones said being a good student and a good athlete “are mutually exclusive.”

“You can be both and it might require you to do extra work,” he said. “At the end of the day it’s something that you can be proud of when you’re successful.”

At Lawrence Livermore, Jones said he worked on a project dealing with ground penetrating radar, an application that “uses radar pulses to image the subsurface,” according to Wikipedia.

“It wasn’t really mechanical engineering focused,” Jones said. “It was more broad but it was nice because it got me out of my comfort zone.”

Jones said his internship was supposed to be for three months but it was cut short due to the coronavirus as he spent roughly six weeks at the laboratory.

And although it didn’t pertain to his major, Jones said he was able to use some of the things he was familiar with, such as coding and 3-D design.

“It definitely was a really great experience and it was super positive,” he said. “Honestly, I got the best look at what an engineer really does on a daily basis, especially at a place like that so that was really cool.”

With the summer coming to a close, Jones said he’s not sure what’s to come for the upcoming term, as some of the students will continue to do remote learning.

“In the spring, everyone had to be off campus so we we’re doing virtual learning at home, which is actually really hard to do,” he said. “Right now the summer term is going on and some students are taking virtual classes again.”

For the fall term, Jones said the junior and freshmen class would have priority for being on campus while the rest would have to do virtual learning.

And while he would like to be on campus for in-person instruction, Jones said he’s going to take some basic classes he needs to complete his degree.

“I’m going to knock those out and then I’ll be moving to my project-based classes for my fifth year,” he said.