Six years ago, Zhoniba Belone, 17, was begging her mother to let her play football. She was in the seventh grade and wanted to try it out but her mother was unsure.

It took a year of convincing but during her eighth grade year Belone was allowed to play football. “I played my very first football game and I almost got a tackle,” Belone remembered. “My mom was surprised and that’s when she said, ‘Yeah, she can do it. She has it.” 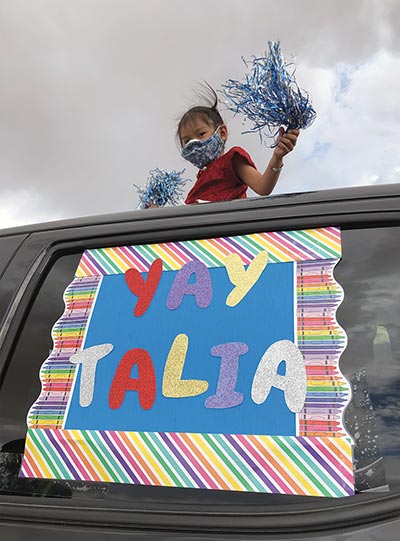 Navajo Times | Ravonelle Yazzie
Talia Curley waves her pom poms in the air to celebrate her promotion to kindergarten on Friday in Sanostee, N.M. Sanostee Chapter organized a community graduation parade for graduates of all grades.

After five years of football, she played her last game in the fall of 2019. The next half of her senior year, she was gearing up to compete in her last season of track and field. She competed in one meet before the pandemic hit the Navajo Nation. “I didn’t know it was going to be my last meet,” Belone said with a laugh.

She graduated from Newcomb High School without a normal graduation ceremony and without her friends. Last Friday, Belone and her cousin, who is also a 2020 graduate, decided to participate in the graduation parade that was hosted by Sanostee Chapter for local graduates.

Preschoolers promoting to kindergarten, eighth-graders promoting to high school and high school and college graduates were invited to participate so the community could recognize student success. Gerald Henderson, vice president of Sanostee Chapter, wanted to celebrate the big accomplishments by the children and young people from his community. “We set the example for them,” Henderson said.

“One day they might do this for the chapter.” The chapter collaborated with a small local catering business to do a drive through cook-out, the Community Emergency Response team gave out gifts, the chapter house gave out fruits and veggies and local YouTuber Sierra Johnson handed out COVID-19 supplies.

It was collaboration that made this event possible and Henderson hopes this shows other chapters what they can do for their communities. The parade was less than 20 cars long but it was filled with smiles and waves.

Another participating graduate was Kiona Elizabeth Lewis-Chase who graduated from Newcomb High School, according to a banner on the side of her parents’ vehicle.

Lewis-Chase was sitting in her green cap and gown on the bed of her parents’ truck on a fold-out chair. Her warm-tone eyeshadow made her brown eyes pop and the tassel on her cap blew in the wind. So much so, she eventually had to hold her tassel down with one hand. She was wearing a mask just like the other graduates were.

“It’s kind of sad,” Lewis-Chase said. “I didn’t get the graduation I was dreaming of.” She had always imagined walking across the stage in front of her family and friends.

But that didn’t happen as public health orders forbid people to be in groups of five or more as the Navajo Nation and states continue to battle the rising cases of COVID-19. “It feels nice,” she said. “Just for them to do something like this for graduates.”

Lewis-Chase is planning to attend the Institute of American Indian Arts in the fall to study culinary arts. She loves baking. During her high school years, baking became a form of stress relief for Lewis-Chase and she decided this was the path for her.

“I forget about things that happened and just decorate cakes,” she said.

She also has another artistic outlet and that’s makeup. Lewis-Chase loves creating different makeup looks and even tried to start a makeup club where other people, girls and boys, could hang out and talk about makeup. She didn’t get enough people to join to keep it going but that didn’t faze her.

She was just happy that she tried and her family was proud of her for trying. A few vehicles down from Lewis-Chase was Devin Brown who graduated from Northwest High School in Shiprock.

He was sitting outside the back passenger seat window waving at the people from his community.

Brown was very active in sports. He played basketball, cross-country, football, track and field and baseball. “I really loved doing sports,” Brown said. He learned a lot about endurance and resiliency.

He was bummed that he couldn’t compete in his last season of track and field where he did a number of events. Since schools closed down, he hasn’t been as active and misses being in sports. Nonetheless, Brown is happy that he graduated.