‘We got some big boys’: Alchesay outguns Red Mesa for region title 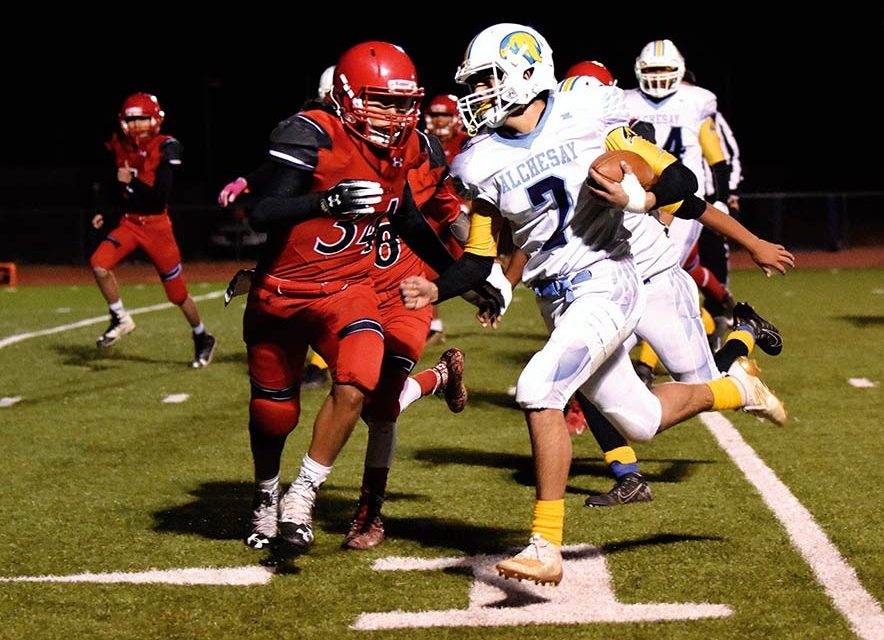 The Alchesay football team continued its dominance among 2A teams from the north.

The Falcons captured their fourth straight conference title last Friday night by upending Red Mesa by a 32-8 count for the 2A Little Colorado region title despite losing some skilled players to graduation last season.

“It still was a possibility because we’ve always had a lower-level program for the last five years,” Alchesay coach Brandon Newcomb said of the team’s prospect of winning the region title.

“I’m real proud of my kids but hats off to coach Pita and his program,” Newcomb added. “They’re a little school and we’re three times bigger than them. We have 500 kids at our school and they got 150. The kids they got are all sons of a gun, who work hard for their coach.”

“That’s the heart of our program,” Newcomb said of their line. “We’re bigger than everybody and we may not be as quick and fast but we’re going to be solid up front.

“That’s something we have down there in Whiteriver,” he added. “We got some big boys so that’s why we bring shoe-to-shoe and we’re grinding and pounding.”

Early on though, Alchesay had a tough time finding its footing as its players fumbled the ball three straight times to start the contest, including one at Red Mesa’s 1-yard line at the start of the second stanza.

After Alchesay coughed up the ball near the end zone with 11:30 left in the first half, Red Mesa went the other way for a 99-yard TD drive.

Sophomore quarterback Bradley Benally completed 2-of-3 passes for large gains as he hit junior running back Austin Woody for a 41-yard reception that set up Red Mesa at Alchesay’s 45-yard line.

On the final play of the drive, Red Mesa reached into its bag of tricks when Benally tossed a lateral pass to sophomore running back Tevin King, who then pitched it to Chilly for a 14-yard TD reception with just over eight minutes left in the second quarter for a 6-0 advantage.

“They were getting some backs out there that we didn’t think they were going to throw to,” Newcomb said. “They got us with those crossing routes and they were playing us tough up front.”

Red Mesa upped its lead to 8-0 with 2:28 left after Alchesay tossed in a pair of bad snaps for a safety.

Despite putting themselves in a tough spot the Falcons cut that deficit down to 8-6 when senior quarterback Elisha Walker tossed a 49-yard TD reception to tight end Carlton Edwards with 34.6 seconds before the half.

That score parlayed a shift in momentum with the Falcons opening the second half with a 73-yard TD drive with junior running back Davin Parker running in the final five yards.

“We had a game plan but we didn’t carry it out,” Red Mesa coach Pita Olumua said. “We killed our chances with our mistakes but the kids tried their best. Those guys (Alchesay) just wore us down. We don’t have bodies like they do.”

It didn’t help Red Mesa’s cause when they were on the verge of retaking the lead late in the third quarter. After moving the ball 66 yards to reach Alchesay’s 18-yard line Benally was looking to pass the ball to Chilly but it was out of his reach. The Red Mesa sophomore attempted to clutch the ball but his tip allowed Parker to return it for 67 yards for an interception as the Alchesay defensive back was tackled just outside Red Mesa’s 20-yard line.

Three plays later, Parker gave Alchesay an 18-8 cushion with 1:45 left in the third.

“Nothing bounced our way,” Olumua said, while lamenting that if they punched in that drive for a score it would have given them some confidence to finish out the game.

Instead, Alchesay added two more scores in the fourth stanza with Walker and Parker scoring a pair of 2-yard TDs.

Parker carried the load for Alchesay as he finished the contest with 223 yards rushing on 32 carries and three TD scores.

“David is a heck of a player for us,” Newcomb said.

The loss ended Red Mesa’s season with a record of 8-2 as Olumua’s team did not make the 2A state playoffs.

“We still had a good season because we had a lot of young kids,” the longtime Red Mesa coach said. “We only had two returnees and we had seven seniors with five of those kids are first-time players.”

With Benally, King, Woody and the entire line being underclassmen, Olumua said the future looks promising.

As the region champion, Alchesay made the state playoffs. They will take on No. 3 seed Phoenix Christian on Friday at 7 p.m.

“I’m glad that we’re in the playoffs but the joy that I have is seeing our kids smile,” Newcomb said. “This is our fourth straight and all of the hours I spent away from my family and all the commitments we made makes this well worth it.”