Japan: a place of balance, order in all things 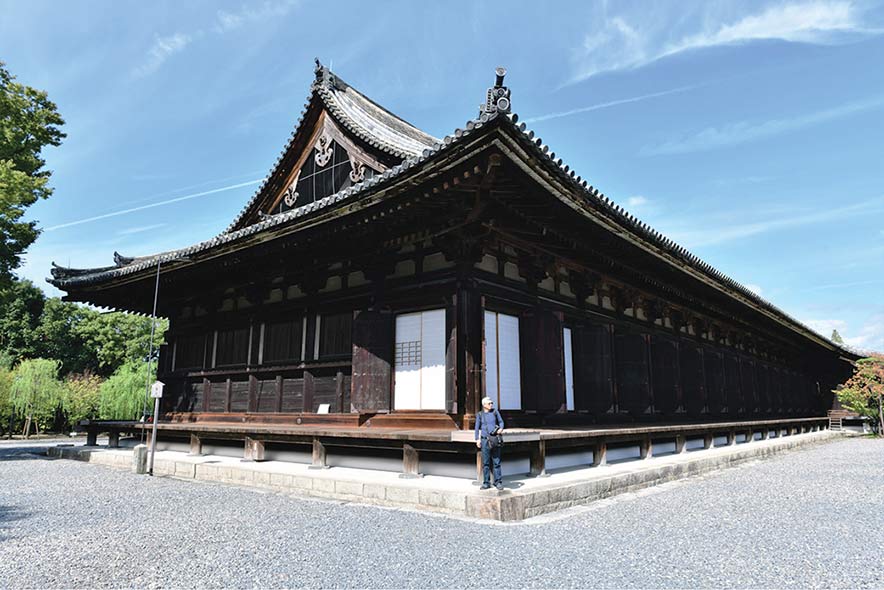 Special to the Times | Bazhnibah
Sanjusangendo Temple’s main hall houses 1,001 standing armed Kannon (attendants and statues) inside the temple. We are not allowed to take any photos inside. Built in 1164, it caught on fire and burned in 1249 and was rebuilt. The temple is in Kyoto, Japan. Kenji seems small compared to the building.

By Ruth Kawano
Special to the Times

My first visit to Japan was in 1981. It was a long plane ride, my first out of the country and the Navajo Nation.

It wasn’t a small domestic flight. The plane was huge, carrying over 300 people.

I think I was more excited than scared. I had no idea what being in a new country was going to be like! I am Navajo-Diné, a woman who fell in love with and married a Japanese man. Japan is the motherland to my husband, Kenji. 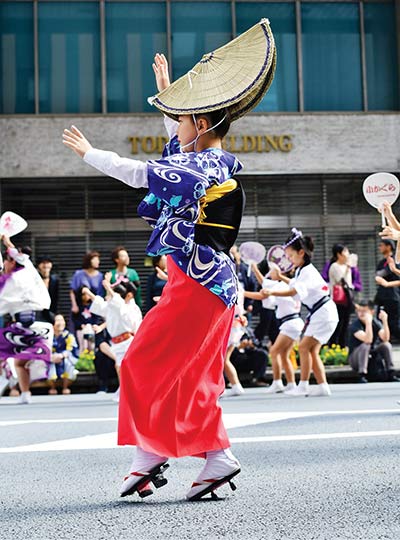 Special to the Times | Bazhnibah

A dancer at a Matsuri parade in Yodabashi, Tokyo, Japan. The parade was colorful, musical and featured many types of dress and foot wear.

I remember it was raining and I looked at the men around the plane as we landed. They were Japanese, slanted-eyed people. I was really in Japan, I thought.

We deplaned and went through customs. Then we boarded a bus which took us over five hours to his hometown. It is normally a two-hour ride but because it was a holiday that day, May 5, it took us longer.

It had been seven-and-a-half years since he had seen his family! I felt a sense of guilt. What if they didn’t like me? What if his parents objected to a foreigner? What if they blamed me for Kenji not coming home sooner?

Thoughts ran through my mind at that time. But his family was nice and accepting.

This year, 2019, marks the 20-plus years that I have been going to Japan with Kenji.

As we boarded our United flight to Tokyo this October, I was once again excited. We flew over Canada and Alaska and then the Bering Sea. In no time we landed, and all the familiar sights, smells and sounds flooded my awareness.

Having been to Japan several times, it has become automatic for me to switch to a bit of Japanese culture – the mannerisms and all the social rules. I also keep my Diné culture intact. That does not change for me.

As I ponder over the years I have been coming to Japan, I have come to some conclusions of my observations of this beautiful place. People respond in many ways to a new culture, new people and customs.

I always saw the beauty and strengths of the land. Japan is a fascinating place.

I see symmetry and order in almost everything from architecture, structures, people, mannerisms, art to fashion, food, music, etc. There is a balance and harmony in everything.

When foreigners come to Japan, things are not always in order. For instance, Japanese people wear face masks even with a slight sneeze or cough to protect others especially since space is so confined everywhere.

The subways, eating places and many other venues put people in close proximity. Non-conforming people then put others in a disorderly state, a non-balance, if you will.

I have grown so fond of the Japanese architecture having seen both modern buildings and old-style traditional structures. The architecture is symmetric even if it crisscrosses or is misshaped.

Asymmetric architecture becomes balanced and symmetric. Flower arranging or bonsai tree trimming have bits of asymmetry but become symmetric in form such as color and size.
Food is an art. Taste and placement of food on a dish have balance. I like that harmony.

Everything seems to function as order would have it. The transportation systems are almost always on time as posted. The city can be quite busy but if people have the same purpose such as getting on or off the subway or train system, somehow it all flows smoothly, whether with a few hundred or thousands of people daily.

This year the bullet train, or Shinkansen, was great to use for a trip from Tokyo to Kyoto, another metropolis. It was fast, clean, on time and orderly. It stopped only for a few minutes at a couple of places, but because people conformed to its use, people came on board or left the train on time. It’s always amazing to experience transportation in Japan.

Over the years I have enjoyed many shopping areas. The customer service is top-notch. Every morning when shops open, the salespeople bow to their customers, to give thanks for their interest.

Streets are extra clean in the morning hours.

When you buy things from a shop, they take extra care in packaging merchandise. Beautiful bags are used as each shop designs its own. You are acknowledged as you enter a shop, store or restaurant then again as you leave. You feel important. What a concept!

I’ve always wanted to take a few Navajo Nation Council members or businesspeople to Japan to have them experience how business is conducted in Japan, whether by small or large corporations.

There is so much I can say positively about the culture of Japan, a nation of balance and order. I always enjoy our trips there.

Once I asked Kenji early in our marriage why he didn’t return to Japan as it is so rich, so beautiful, so harmonious and with so many beautiful people. I did not understand at a young age, but Kenji explained to me why.

It wasn’t about the lack of beauty and harmony but he had accepted the new harmony he was now a part of. Now he considers the Diné Nation as his “home.” I feel blessed to be part of his life and for him to be a part of where I come from and who I am.

I feel harmony here too, but in a different way.

Ruth Kawano is a retired registered nurse who is returning to her first love of film and photography. She works under her given name, Bazhnibah. She has been actively working on a Diné Women project through photography and writing as well as travelling to near and faraway places to learn other cultures and photographing. Information: rkawano@citlink.net.