Going as far has he can go: Fighter beats COVID-19 on the way to becoming MMA pro 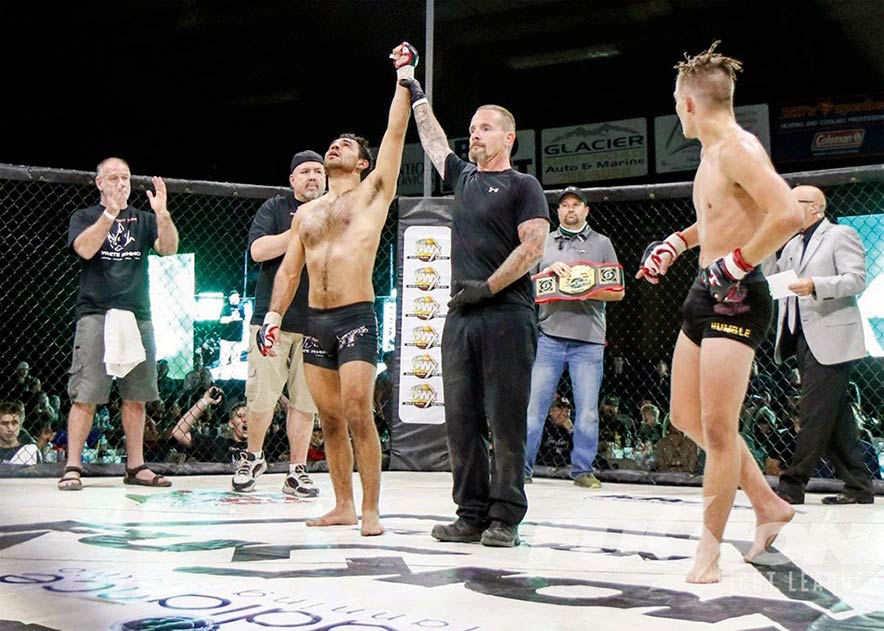 After nearly six years of training and surviving the COVID-19 virus, Julius Deschinee is on his way to his Mixed Martial Arts pro debut on Nov. 14 at the Maverik Center in West Valley, Utah.

Originally from Cornfields, Arizona, Julius grew up playing a multitude of sports as a boy. He competed in football, track & field, cross-country, and wrestled at Page High School.

After graduating, he went on to study nutrition at Southern Utah University, where he graduated in 2019.

According to his father, Anthony Deschinee, throughout his journey, Julius never forgot his roots.

“He’s proud to be a Navajo, and it’s humbling to know,” Anthony said. “His humble side is also seen on his mom’s side too, his German side. I can see the same drive coming from that side of the family as well.

For Julius, his heritage is something that sets him apart from others.

“It makes me humble and thankful for my roots and that I know my ancestors and know where I come from,” he said. “A lot of people I’m around now don’t know and have nothing they can look back on.” 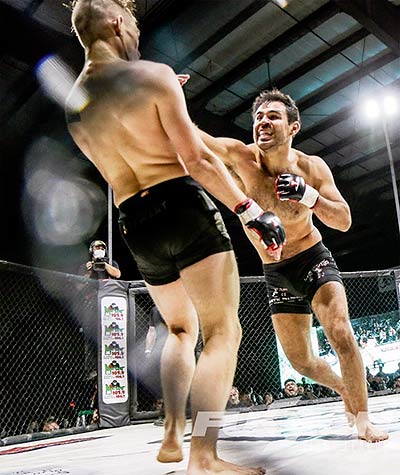 Submitted
Julius Deschinee takes a swing against his opponent in a recent amateur bout. Deschinee, who overcame COVID-19, will start his MMA pro career on Nov. 14 in West Valley, Utah.

As a Winslow High alumnus and former athlete, Anthony raised his children to give their all in whatever they do. He’s happy that they are active in sports, but he and his wife, a teacher who taught at Shonto, always stressed education’s importance.

“Me and his mom told him, ‘You want to do something, we want to see that degree first, and then you can do whatever you want, so that way you have something to fall back on,’” Anthony said.

“And after college, he chose that (MMA), so he’s been training,” he said.

During his time at the university, Julius was first introduced to mixed martial arts, or MMA, and was instantly hooked.

He started his training at “Cedar City Jiu-Jitsu and MMA,” where he learned the basics. It was there that he first met his trainer, Steven Eargle.

Eargle is a fighter himself who has won two heavyweight titles, one for MMA and one for kickboxing. When he first started training Julius, he saw his potential right away.

“He already had a great wrestling background, and just the way he trained and grew, he just adapted so quickly, and we just went with it,” Eargle said.

He also said what makes Julius stand out is “his never-quit attitude.”

Believing that Julius had what it takes to go to the next level, Eargle took it further by offering Julius room and board while he was at college in Ceader City and then later on when they went to train in Las Vegas.

“Unfortunately, a lot of people who are amateurs or beginning pros have to work full time and still try to get their training in, and they don’t grow as fast,” Eargle said. “So with him not having to worry about that (room and board), we were able to get his two-a-day training sessions in and be able to grow him so much faster to get him to the high-level pros.”

After graduating from SSU, Julius focused solely on his MMA career. He moved to Vegas to train.

“I’m just very grateful to Steven for giving me that chance, to allow me to pursue MMA, and I won’t have to worry about other things,” Julius said. “Las Vegas is the MMA capital of the world. There are so many people down here.

“I get help from the real champions who I train with,” he said. “It’s a lot better than where I trained previously in Cedar City. Vegas is full of a lot of different competitions and trainers.”

Julius won two titles and recorded five MMA victories as an amateur fighter, including one win by total knockout.

Although he isn’t earning much as an amateur, that will change once he becomes an MMA professional. He’ll be paid for each of his fights, get to perform at the next level, and earn himself recognition and more exposure, which will increase the chance of him getting sponsors.

A bump in the road

However, this year Julius hit a bump in the road: COVID-19.

Not only did the virus mess up his training schedule and cancel some of his fights, but Julius and his group of friends, including Eargle, caught COVID in July.

The deadly virus had left many of Julius’ friends and family praying as the young athlete locked himself away to protect others. Out of his group of friends, it was Julius who suffered from it the most.

He only allowed his parents to visit when they were fully geared up in heavy-duty work masks and were careful of exposure.

“With how it affected my lungs, I thought I might have permeant damage,” Julius said. “But over time, it healed. I had to cancel a kickboxing fight in August, and I didn’t know how long the virus would keep me out.”

After a month of bed rest and medication, including traditional Navajo herbs brought by his family, Julius had begun to recover around August.

He was scheduled to compete for an interim title at the Fusion Fight in Montana, but he was given the option to withdraw.

“I could have said no,” Julius said. “But I actually ended up getting super depressed staying in my house all day doing nothing with my life … so when I took the fight, it was really good for me, but my body wasn’t ready.”

As it was a lightweight event, Julius had to weigh precisely 145 pounds to qualify. After his prolonged bed rest, he weighed 175 pounds. He worked to burn through 30 pounds of body fat for a whole month and had nothing but pure muscle left.

However, at the official weighing, he was 147 pounds. Julius went on to defeat his opponent, but he didn’t receive the title because of the extra two pounds.

Despite the drawback, he didn’t let the loss get to him, not with his pro debut coming up in November.

With the title of “professional” on the horizon, Julius sees it as the next step in his journey, and his family couldn’t be prouder.

“As a parent, you got to feel proud,” Anthony said. “I’m proud of my boy, MMA is a brutal sport … these boys really get down hard, and they really hit each other.

“But he trained hard enough to where he learned all of it – jiu-jitsu, boxing – and he’s already good at wrestling,” he said. “You got to put all of that together. It’s not like boxing. It’s everything. Knees, elbow, everything goes. You got to be in tip-top shape, and I think he’s there.

“He’s going a hundred miles right now … he is giving it 110 percent,” Anthony said. “He really does, he really wants to get up there, that’s what he wants.”

With many of his friends and family watching him from home in Cornfields, Arizona, it motivates Julius to give every fight his all.

“During the lockdown, there were no sports, not a lot going on, and when I had a fight during it, everyone was super happy to see me on TV and to fight,” Julius said. “That’s what makes it fun for me and enjoyable is when my friends and family and the entertainment product that I provide for home. It gives them something to look up to and think about.”

Eargleagrees with that sentiment as well, believing that once Julius goes pro, it will change not just his career but also his life.

“He’s one of the most dedicated fighters that I have,” Eargle said. “Working with him, rising from beginning amateur to pro, and his will is unstoppable. But outside of the cage or ring, he is actually a very nice person who helps people in whatever way he can.”

Even though he is planning to have a long career as a fighter, Julius hopes to return to the Navajo Nation and give back to the people. He plans to use his nutrition degree to advocate for healthy eating habits for Native youth and their families.

This will be his way of thanking the nation for providing scholarships and grants to his family as they strived for their higher education.

Until then, Julius is getting ready to start the next leg of his MMA career.