Navajo Nation could soon be home to lacrosse, the fastest growing sport 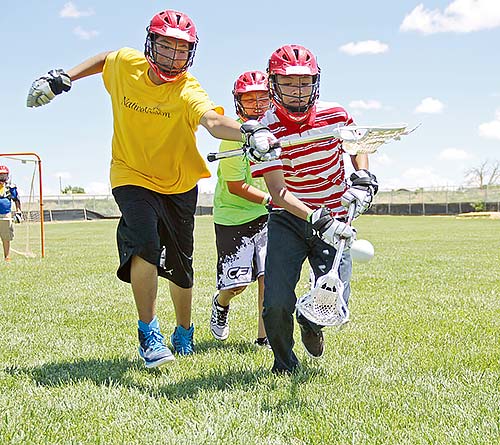 Tucked behind the Shiprock High School football stadium, on a stretch of green grass that covers the baseball field, a group of kids picked up a lacrosse stick for the first time.

With the help of professional Native American lacrosse players, they practiced scooping the ball into the head of their sticks, often encouraging one another.

The same group of kids spent three days at the Native Vision camp held at the high school on June 11-13, learning the ins and outs of the game.

Many were like Corbin Rouillard,a Diné and Pueblo, who got sucked into the game after only a half-day’s lesson.

Rouillard will be in the eighth grade at Kirtland Middle School this fall. He said if lacrosse were available he would consider playing it more than the any other sports offered at his school.

The game of lacrosse, known for its Native American origins, is said to be one of the fastest growing sports in the country but it has yet to hit the Navajo Nation.

During the camp, participants were given the option to choose a sports clinic of their choice and a staggering number chose lacrosse.

The clinic was taught by some of the best players from Indian Country who believed some form of lacrosse existed on the Navajo Nation and in other Native American tribes.

Former member of the Iroquois Nationals lacrosse team and current director of the Muskogee (Creek) Cultural Center and archives department in Oklahoma, said Native Americans throughout the world have had some form of a stick-and-ball game native to them, and it should be reintroduced through lacrosse. Giles was one of the lacrosse instructors at the camp.