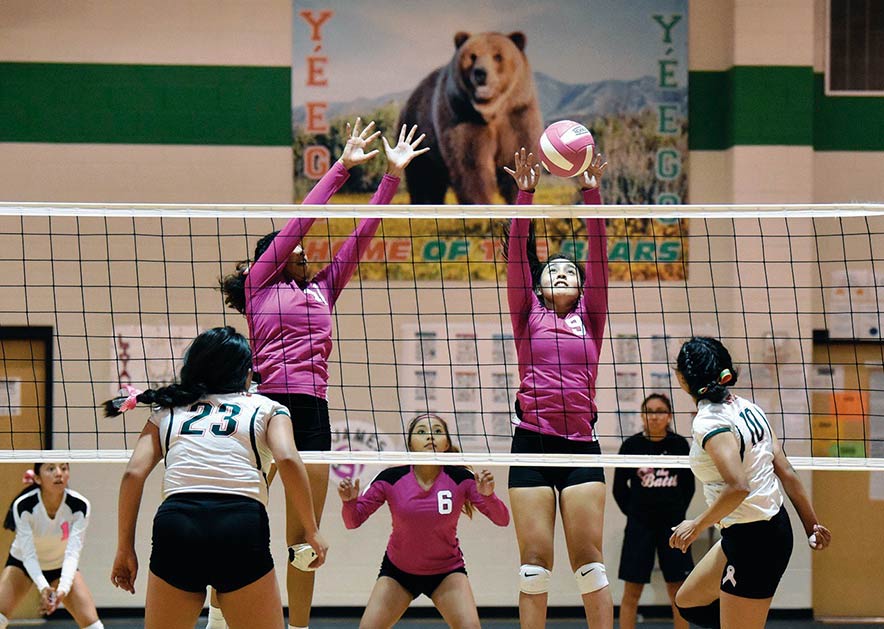 File photo
Navajo Prep announced on Feb. 5 that the school is not offering fall sports this year as the high school has to abide by the rules set by the Navajo Nation. Last month the Navajo Nation Board of Education passed a resolution for all schools to continue with remote learning for the rest of the spring term. That decision prevents Navajo Prep from offering in-class hybrid learning, a perquisite to play sports per the New Mexico Public Education Department.

In another numbing blow, the student-athletes at Navajo Prep were told that the school would not be offering fall sports this year.

The school made that announcement last Friday in a letter sent from Shawna A. Becenti, the Head of School, explaining that the decision was precipitated by that fact that Navajo Prep is compelled to abide to all the rules set by the Navajo Nation.

“Navajo Prep is authorized to operate by the Navajo Nation and is required to abide by all Navajo Nation regulations,” the statement read.

The delayed fall sports season was supposed to have started last fall but it got pushed back to the spring with the tentative start date scheduled for Feb. 22.

“This resolution, along with the Navajo Nation’s stay-at-home public health orders, limits Navajo Prep’s ability to move into a hybrid plan outlined in Phase II of our Return to School Plan,” she said. “According to the NMAA guidelines, Navajo Prep may only participate in sports if the school is operating within a hybrid model.”

Navajo Prep athletic director Rainy Crisp said the decision to not have fall sports served as “another whammy” for their student-athletes.

“It’s really tough to give up their hopes again,” Crisp said on Tuesday. “Our students are really sad, especially the seniors who really wanted to play the sport they love.”

Like everyone across the state, Crisp said their student-athletes have been on an emotional rollercoaster since last fall as the return of prep sports was delayed until late last month when New Mexico Gov. Michelle Lujan Grisham and the Public Education Department announced that school districts could return for in-class learning as early as Feb. 8.

With that announcement, the PED gave the green light for the NMAA to begin sports on Feb. 22.

“When we were trying to bring back volleyball and cross country back in October it was tough to tell them that we were going to delay their season,” she said. “We told them that fall sports was going to come back and it brought their hopes back up.”

But to do it a second time, Crisp said, was devastating.

“It was really tough to make that announcement,” she said. “As the athletic director, I was hoping that we could offer all of our athletes to play every sport. I know it’s not fair that our fall athletes are not playing but we’re hoping and praying that we’re able to at least offer winter and spring sports for our student-athletes.”

Crisp said their fall sport athletes were on the cusp of doing great things this year.

“Our volleyball program had a good chance to make a good run in the state tournament,” she said. “Our cross country team was really young last year, and they were really excited about coming back this year.”

The football and soccer programs, Crisp said, were also expected to do well this year with both teams challenging for a district title.

“It’s hard to have these kids lose hope and be so disappointed,” she said. “This is out of our hands and my hope was to have them suit up in that Navajo Prep uniform again.”

On both fronts, she was told no.

With the winter sports looming around the corner, Crisp said they would need to start hybrid learning soon.

“We’re keeping our hopes on having a season,” she said. “Our kids would like that opportunity and I think the latest we can implement hybrid learning is April 5 in order for us to compete in winter sports.”

Nonetheless, she said the school has proposed to start hybrid learning on Mar. 22 and that depends on the Navajo Nation’s Department of Diné Education.

“I’m really hoping that DODE can make a decision on whether we can implement those plans,” she said. “Our student-athletes need an answer because we’ve been playing with their emotions for so long and it’s really unhealthy for them, emotionally and mentally.”