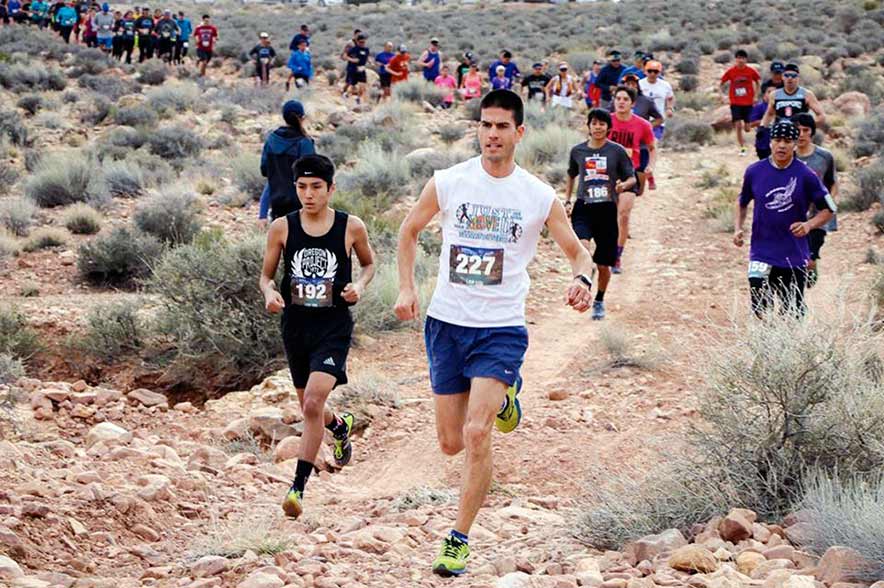 Submitted
Andy Yazzie (227) gains a slight lead in a previous NavajoYes race in this file photo. Due to the pandemic, the youth-driven organization has organized virtual races from June 1 to Aug. 15 to keep community members active.

By Sunnie Clahchischiligi
Special to the Times

While most athletes are sidelined due to the pandemic, others will virtually race across Navajoland.

NavajoYES, a youth-driven organization in Navajo that organizes the Shiprock Marathon and other foot and bike races across the Navajo Nation, established its latest event after most of their traditional, live race series were cancelled. The new virtual race series is entitled RAD – Race Across Dine Bikeyah, where runners, walkers, and bikers take part in a virtual series of races that run from June 1 to Aug. 15.

NavajoYES Executive Director Tom Riggenbach said the organization has had to get creative in finding ways to keep community members active and social, so they came up with RAD.

“We’re trying to make some adjustments to keep people healthy, keep people active, and get in some social time as well. I think that’s what people are really missing right now,” he said. “We thought that things are going to remain a little locked down on the nation for a while, why not do something a little bit different, a positive for people physically and socially.”

The first of the six segments of the race will begin on June 1. Runners will imagine they are running from Cameron to Lechee/Page, Ariz., while they actually run wherever they are at. Runners will have to run 70 miles in 13 days. The second segment will be from Lechee/Page to Navajo Mountain, the third from Navajo Mountain to Monument Valley, the fourth from Monument Valley to Teec Nos Pos, the fifth from Teec Nos Pos to Shiprock Pinnacle, and the final segment from Shiprock to Window Rock.

The race is open to all ages, competitive and non-competitive, to relay teams of two to five runners, and to bikers, who will race in the final 10 days of the race.

Those competing in the competitive race will be required to turn in their times each day to an email specifically created for the event and standings will be immediately available.

Riggenbach said the event was establish in hopes of providing those who are sheltered at home to get out and stay active, and to help uplift them during the difficult time.

“I think while we’re not trying to ignore what’s going on health wise, we’re trying to keep a very positive vibe about the whole event,” Riggenbach said. “We are trying to focus on the resiliency of average people, and the Dine as a whole.”

Before deadline a total of 24 participants signed up from near and far. Selected few were from Kentucky, California, Colorado, and Washington, while others were local.

The event was also organized to have a social feature to it. Those participating are encouraged to share photos and videos of their participation with NavajoYES to share on their social media platforms. Participants will also be greeted, virtually, in each town the race passes through. Peter MacDonald is said to greet runners for the first leg of the race, but other greets will include locals, runners, and notable people from the specified area.

Riggenbach said he and other organizers understand the importance of the Navajo people being social so allowing them to engage with one another virtually was an important component.

“It allows us to all connect, that’s going to be the fun thing when people post their times, videos, pictures, then their friends chime in and respond,” Riggenbach said. “That’s kind of encouraging I think for a lot of people to just get that interaction with their running buddies.”