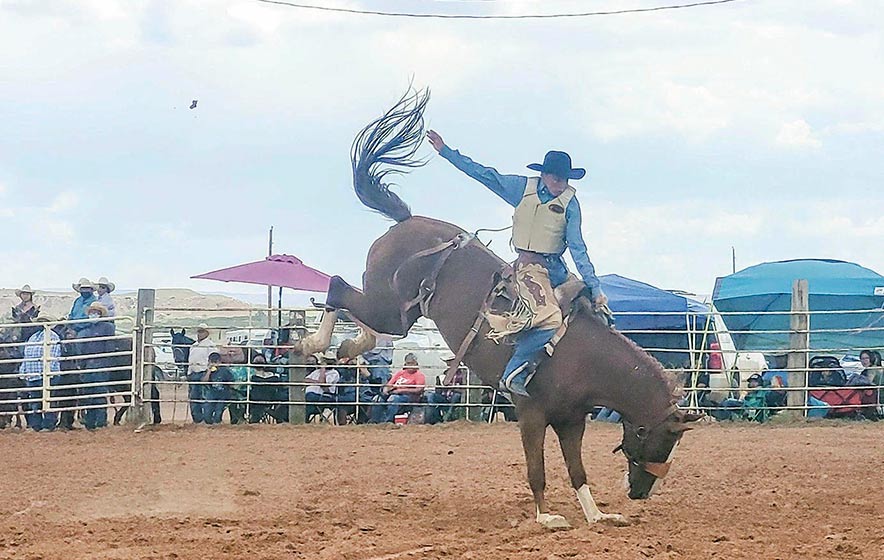 Navajo Times | David Smith
Trey Kee, 16, scored a 76-point ride and finished as the saddle bronc champion at the 26th Black Mesa Rodeo. This is Kee’s first time competing at the annual rodeo.

Held during the Central Agency Fair last weekend, the 26th Annual Black Mesa Rodeo returned with a large crowd and many contestants at the Gorman’s Rodeo Arena just outside Chinle.

It was a bright sunny day through most of Sunday, a sudden downpour occurred in the afternoon before moving away, but it didn’t deter the rodeo.

Rodeo announcer Ralston Descheny, the voice of Circle Dee Ranch from Rock Point, Arizona, said everyone had a fun time. It felt great having rodeos again in the Navajo Nation.

“This is where it all begins from the Navajo Nation,” he said. “Central Fair was amazing. It’s a good comeback; I’m proud and happy to be here with my family.”

He admitted it was tough getting everything ready this year, as they had to follow Covid precautions, but he assured us that the rodeo was made as safe as possible for both contestants and fans. He gives credit to the Navajo Nation EPA and OSHA departments that checked the standards and the Navajo Central Rodeo Association President Harlan Thompson, who also enforced the rules and regulations.

He thanked all the sponsors for their donations and the stock provided, especially Keith Gorman for helping and Frankie Begay, who ensured the arena was ready.

There were many young winners on Sunday, one of them being 16-year-old Trey Kee, being named this year’s champion for the saddle bronc event.

“It was exciting, competitive, and a great experience,” Kee said.

Kee is from Cornfields, Arizona, and he says he is happy to see rodeos coming back to the Nation, a sport that he loves competing in.

He rode a tough horse at the competition; he had ridden it four times before and had been bucked off once. But on Sunday, he scored 76 points, beating his competitors by four.

This was his first time competing in the Black Mesa Rodeo and the first Buckle he had won. He won a saddle before while riding in the Indian Junior Rodeo Association.

“I love everything about it (saddle bronc riding),” Kee said. “The horses, the competition, and everything that goes with it.”

Another champion this year was bull rider Tyson Tsinnijinnie, who gave credit for his win to his family.

“It feels really good every time you win,” Tsinnijinnie said. “It’s like if you have a family back home, winning like that. It’s going to them; it’s not just for you. It’s a good feeling to win again. Giving back to your family.”

Tsinnijinnie’s start in the competition didn’t go well at first. When it was his turn to step off, the bull he rode reared up and nearly fell on top of him.

Despite the near miss, he wanted another go. The bull they gave him for a re-ride was named “Darth Vader,” and Tsinnijinnie was eager to ride him.

“Darth Vader was one of the best ones out there, a real tough bull,” he said. “That’s what you want if you’re a bull rider; you want something that’s on top of its games; that’s the only way you can win.”

Tsinnijinnie referenced his late uncles Randal Harvey and Derek Davis about getting on an ornery bull: ‘Man, when you step off on a ranked bull, it’s a crazy feeling you’re feeling,’ even if it’s just in the practice pen, it feels like you’re unstoppable, you’re top of the game if you ride the highest ranked bull in the pen.”

Tsinnijinnie won the open bull riding with an 86-point ride, beating out Andy Sells by 8 points.

Tsinnijinnie has been doing rodeos since his father first put him on a sheep when he was 4. He’d continue advancing and learning, working his way up to full-grown bulls, saying it’s crazy to think about.

He gives credit to his late uncles and his surviving uncle, Turelle Harvey, who pushed him.

He said it felt great riding in rodeos again; the Covid pandemic changed many things. Despite training and riding occasionally, it felt like he was starting his career again as rodeos slowly returned to the Nation.

But he will keep riding and hopes to see more young riders coming up to challenge him.

“To all the kids out there, I’m almost 30 years old; if you want something, you need to try hard and work for it,” he said. “We’re old; I’m trying hard and working hard for it, so if you put the effort in and try, it’ll get you somewhere.

The all-around champion went to Kirby Spencer, who won the $1,000 prize money and a trophy saddle stand. Full results for the rodeo can be found on the CNRA Facebook page.

Descheny said it was a fun time and was glad to share it with his friends and family. His sons both competed earlier, Ral’Shaun and Ralson, collegiate rodeo athletes who will be riding again soon.

He encourages everyone to continue following the Covid precaution and care for themselves.

Also, he wants them to continue teaching the Navajo language to the children and lessons in friendship.

“So, the 26th annual Black Mesa rodeo is something that is warming,” Descheny said. “Through this pandemic, we have a lot of veteran cowboys that have left and went into the spirit world.

“And through this, we feel more comfortable seeing our rodeo fans out there,” Descheny said. “And I tell you, it brings back a lot of memories from our old veteran cowboys and cowgirls to this new generation of 2022; it’s just a new generation of kids that love the sport of rodeo.”