Brayden Chee from Leupp, Arizona, traveled to Fort Worth, Texas earlier this month and won in his division of 7- to 9-year-olds in the 2020 WNFR World Championship Dummy Roping.

He was also champion for the 6-and-under division last December, making him a two-time dummy roping world champion. 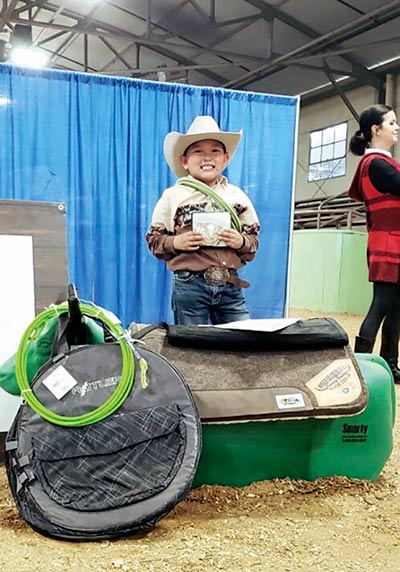 It has been a rough year for sports with there not being many competitions for Brayden this year, but he was still able to make the trip to Texas. There he made it past the preliminary round and on to the championships where he competed with other young qualifiers from across the country. He would win for his age group of 7- to 9-year-old ropers.

However, he wasn’t done yet. He saw there were still some roping competitions going on, mostly for the big kids, and asked his mother, Serena Warren, if he could rope with them.

“He loves to rope, so he wanted to rope again but he wanted to rope in the 10-12 age group and so we let him, like ‘OK, try against the big kids,’ and so he went for it and he came back with fourth place,” Serena said with a laugh. “He was only 7; I wasn’t expecting him to win first or whatever, but it surprises us that he went all the way up to fourth.”

By the end of the competition, Brayden was in the Top 10 in the Ropesmart Rope for The World, had won his second World Champion Title in the World Championship Dummy Roping for Kids and, unexpectedly, placed 4th in the 10-12 age division.

“It was fun and hard,” Brayden said. “I got a saddle blanket, a rope and a rope bag and then a buckle and a gift certificate.”

Brayden’s career started back when he was just one year old, chasing chickens and trying to rope them with a shoestring.

It wouldn’t be until he was three years old that he would win his first buckle for dummy roping. Since then he has won over 20 buckles, two saddles and a multitude of different prizes.

However, it wasn’t the prizes that drove him, it was the pure fun of the competition.

According to Serena, her son was obsessed with roping from the start.

“We knew that’s what he wanted to do because his dad and his uncle rope, so he kind of knows what he has to do and what a rope was and that’s how he grew up.”

Wanting Brayden to grow up healthy, his parents decided that he wouldn’t watch TV or play with a cell phone. This gave the youngster plenty of time to learn the sport from his family, mostly from his dad, Brandon Chee.

“That’s how he is today,” Serena said. “He just can’t sit and watch a movie in the theatre, he has to be outside doing something.”

Brayden is home now, still honing his roping skills while under the tutelage of his No. 1 hero, his dad. His secondary icons are NFR ropers Aaron Tsinigine and Derrick Begay.

One of his favorite activities is chasing cows with his family along the river at home in Leupp.

Brayden is also practicing for next year’s competition, eager to have more fun — and hopefully by then there will be more opportunities for him to compete.

When asked if he wanted to be a cowboy when he grew up, Brayden had one thing to say.