Naatsis’áán Trail Ultra a prayerful experience for some 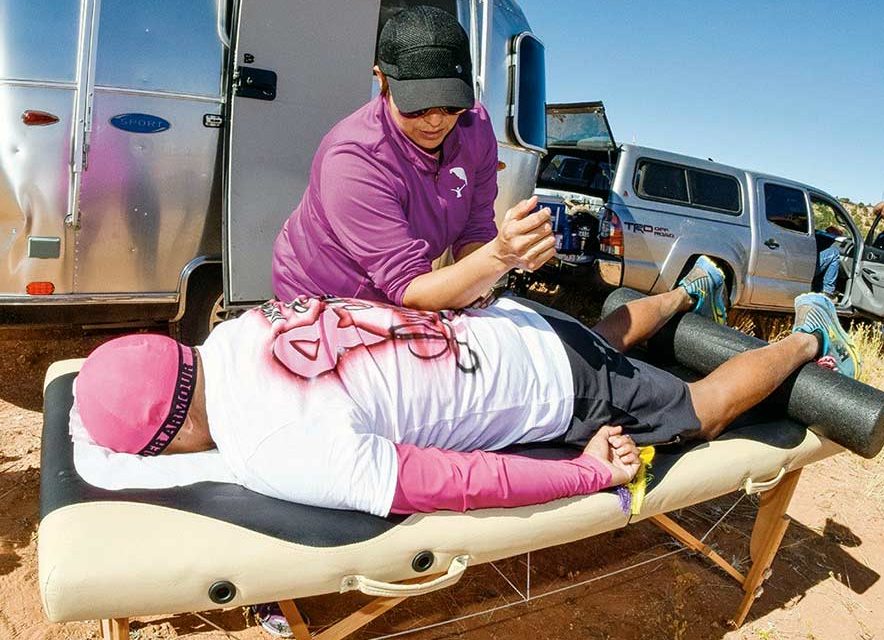 Special to the Times | Krista Allen
Cyndi Frank, a physical therapist at Shiprock-based Cynergy, gives a back massage to Randolph Curley from Tonalea-Red Lake, Arizona, after finishing the Naatsis’áán Trail Ultra 50K in 5:07. Curley finished first.

Troy A. Eid on Saturday morning ran on a tough, narrow dirt trail through the southern flank of Naatsis’áán laccolith.

When he reached the area that overlooks Lake Powell, Eid faced ha’a’aah and said a short Hózhóǫ́jí prayer in Diné bizaad.

“My Diné bizaad is not very good, but I did a short Beauty Way prayer,” said Eid, 55, the president of the Navajo Bar Association, who resides in Morrison, Colorado.

“It was beautiful,” he said. “I didn’t have corn pollen in my hand, but I did the prayer anyway.”

Naatsis’áán – and NavajoYES’ Naatsis’áán Trail Ultra – is one of Eid’s favorite places to run with stunning views of Utah and Western Navajo.

“There’s nothing like it on the Navajo Nation,” said Eid, who ran his first Naatsis’áán Ultra here in 2016.

“It’s a very spiritual place – ‘aahasti,’” he said. “It’s a very beautiful place. And just the feeling of the runners is amazing.”

Eid said =to have an ultramarathon here where some Diné evaded and refused to surrender to the U.S. Army in the 1860s is really remarkable.

“It’s such a wonderful thing and it’s such a privilege to be here,” Eid said. “Of course, we pray, and we prepare in the right way. So it’s a very respectful race.”

Eid said the trailhead starts at Navajo Mountain High and then goes through canyons, up to Hawk Eye Arch, and then passes sandstone walls and colorful foliage.

“It’s remarkable,” Eid added, “but a very difficult trip back up. It’s a very steep, narrow trail – rocky, rough, so it was a challenge … to finish uphill.

But this challenging race doesn’t compare to losing a loved one, said Randolph Curley, 37, from Tonalea-Red Lake, Arizona, who dedicated his 31-miler, which he completed first in 5:07, to his late parents, the late Neal and Lucinda Curley.

“My mom and my dad, because I lost my mom through cancer (in January) this year and it changed me a lot,” said Randolph, who wore some pink running gear in honor of his mother. “And my dad, it’s been three years now. I guess it was hard for my mom, seeing her going through the loss and being by herself – just keeping her happy every day. It was hard.”

Like Eid, Curley said he’s run over this terrain before to Rainbow Bridge. Now that the course has changed, Curley said he didn’t know what to expect other than just to run.

“Like (Friday night, Riggenbach) talked about the course and said it’s like this or like that, but when I got out there, it was a whole different story,” he explained. “(The course) is rocky, inclined, sandy, and you’ve got to watch your footing. It’s kind of tough going down the valley. You’ve got to crawl. And then coming back up here, the last (miles) are tough.”

Curley said his entire family runs, including his sisters and their children, and his own son. He will be competing in San Carlos, Arizona, and in the upcoming Monument Valley Veterans Marathon in honor of his father, who served in the U.S. military.

“It’s hard losing one of your family members, especially your parents,” Curley added. “It’s hard and I wish it’d all come back together. Now it’s not the same at home anymore.”

That’s the reason he runs today, he says, because he understands the journey a family takes through cancer and the transition from military to civilian life, and he supports families who are going through those things now.

“I’m with them too, no matter what they lost or if they’re still going through a battle (with a disease),” Curley said. “I run for them and dedicate everything to them. I know it’s hard and it’s the reason why I (run) because I’m with them. You are not alone.”

Justin Yazzie, 11, from Tódinéeshzhee’, said the Naatsis’áán Trail was a good experience and the area is a beauty. He said as he ran, he prayed for a good life, to fulfill his dream of becoming a professional runner, and to finish the trail with no injuries.

“My peers and my mom’s (Luanne Bradley) friends inspired me to run (Naatsis’áán),” said Yazzie, who’s on his middle school’s cross-country team. “I want to travel the world.”

And that makes his mom happy.

“When he was two years old, he started running with me and he’s just been at it,” said Bradley, the cofounder of the Kayenta Warrior Run. “And he got really competitive and he’s always wanting to be a better runner and meeting a lot of the elite runners. That’s one of the reasons I woke him up this morning and bring him out here.”

One of the elite runners he met over the weekend was Curley.

It was a really fun weekend here, said Riggenbach, race director and executive director for NavajoYES. There were numerous activities with the locals and the schools, including a concert and a comedic show.

“We stayed in the (Naatsis’áán) Chapter House all weekend,” Riggenbach said, “Living large! Ayyy! But yeah, it was a real family affair. There are a lot of kids out here, a lot of kids with their parents. Tons of good food and music, it was a really fun time.”

Riggenbach said in past ultramarathons here, the trail ran to Rainbow Bridge, but because of concerns over certain parts of the area, the trail was rerouted to respect the local residents and the chapter officials who helped create a trail for the runners.

“It’s been fun. In a way, we kind of miss Rainbow because it’s Rainbow Bridge,” Riggenbach said. “But this new route is so dramatic, and you get so many different elements in it. People seem to really enjoy it. As a run, this is a really, really runnable terrain. But we had a great run.”

Riggenbach added that the Naatsis’áán Ultra is one of events in the Navajo Park race series that brings runners from the area and from across the country to special places on Diné Bikéyah in a respectful manner.

“It’s so cool for people to experience – to see the sunrise and the mountain,” Riggenbach added. “We had a local (medicine man Frank Fatt, who ran the 10K, from nearby Paiute Mesa) at the start do a traveling song. It was really heartful. And this is one of the most beautiful countries in Diné Bikéyah.”