With his first place win at the PBR’s Buckin on the Rez, Jose Vitor Leme is making a push at becoming a world champion. 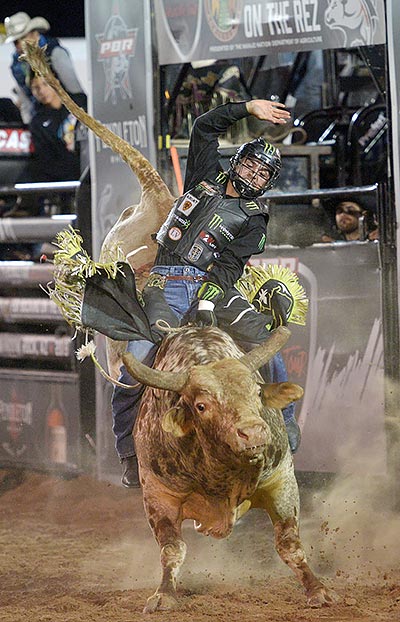 Professional bull rider Jose Vitor Leme from Rieas do Rio Pareo, Brazil, hangs on Tuesday night during the PBR’s Buckin on the Rez at the Dean C. Jackson Memorial Arena in Window Rock. Leme rode for a score of 86 points.

On Wednesday night before a large crowd at the Dean C. Jackson Memorial Arena, Leme went a perfect 2-for-2 for a combined score of 177 points, which included a first-place ride of 91 points aboard Sledge Hammer (Golden Boys) in the opening round.

“This is awesome,” Leme said. “I’m very happy to come here, my first time … and lot of great fans. I really love this. This is awesome, this is really helping us ride bulls.”

In the championship round, Leme secured the title by posting an 86-point ride on Chaos Ghost (Winston Bucking Bulls/Melton Bull Company) as he collected 220 points to move up to No. 2 in the world standings behind top-ranked Jess Lockwood, who opted out of the Window Rock event.

With Wednesday night’s win, Leme surpassed former No. 2 Chase Outlaw in the world standings as the Brazilian cowboy has collected 4,482 points.

He trails Lockwood by 248 points heading into this weekend’s PBR Unleash the Beast Anaheim Invitational.

“I have a lot of confidence for my next event in Anaheim because I win here,” Leme said.

Leme said he got on “some great bulls” in Window Rock to earn his points.

With an aggregate of 174.50 points, Joao Ricardo Vieira finished behind behind Leme while fellow countryman Marco Eguchi came in third with 174 points.

Hometown cowboy Cody Jesus rode 1-of-2 bulls as he finished 7th overall by coverng his opening round bull with 90.50 points on Mortimer (Julio Moreno/Dallaas Schott).

In the championship round, the defending Buckin on the Rez champion rode I’m a Secret (TDS Bucking Bulls) for 7.30 seconds, losing his grip at the tail end of his ride.

Jesus was unavailable for comments afterward.

In addition to Jesus, a pair of Diné bull riders took part with Keyshawn Whitehorse and Justin Granger getting bucked off in the opening round.