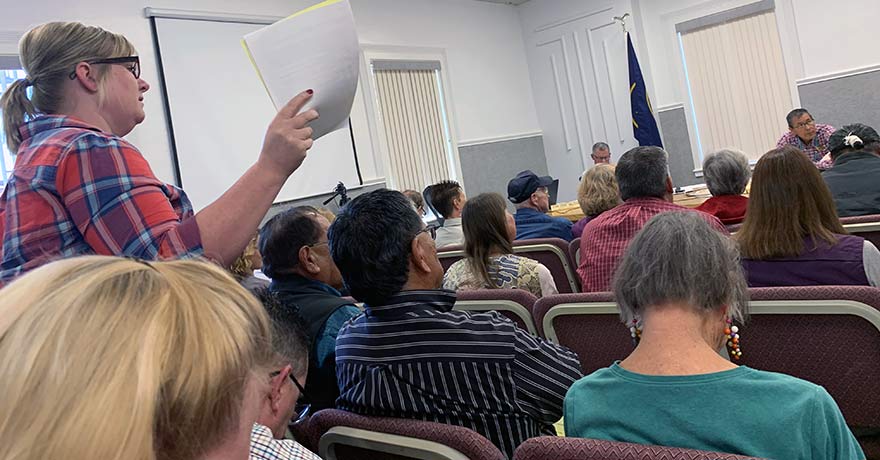 In what some Utah Navajos are calling the latest salvo against its first majority Navajo county commission, San Juan County has set a special election Nov. 5 to determine if a study committee should be formed on changing the county’s form of government.

“This appears to be yet another attempt to get rid of the three current electoral commission districts and gerrymander the county districts back in favor of             Anglo residents,” stated a press release from the pro-Bears Ears National Monument group Utah Diné Bikéyah.

The initiative is backed by the mayors of Blanding and Monticello, Utah, along with three other county residents.

The county is currently governed by a three-member commission, of whom two — Willie Grayeyes and Kenneth Maryboy — are Navajo and one, Bruce Adams, is white.

For decades, there was no or only one Diné commissioner, even though Native Americans comprise a slight majority in the county. That changed this year after a federal judge, responding to a lawsuit by the Navajo Nation, Navajo Human Rights Commission and individual Navajo voters, ordered the commission districts to be redrawn to accurately reflect the racial distribution of the county.

The new commission also changed the political makeup of county government, since both Maryboy and Grayeyes are Democrats and the commission has historically been mostly Republican.

After the new commission took office in January, it immediately (often over Adams’ objections) started making changes, including reversing the county’s position on expanding Bears Ears National Monument to its original size and holding meetings in communities on the reservation.

In an interview with the Times in May, Maryboy said he and Grayeyes have been subjected to continual harassment by members of the white minority who “can’t stand to see Native Americans in the driver’s seat.”

But some Utah Navajos who supported President Donald Trump’s downsizing of Bears Ears have also been critical of the two Diné commissioners, saying they don’t feel they’re listening to all of their constituents.

Tensions came to a head at recent town hall meetings in Monticello and Mexican Water, according to news reports in the Salt Lake Tribune and KUER.com, with some Navajos calling the Anglos “racist” and the Anglos complaining that they don’t feel represented by the commission.

In addition to the standard three-member commission, Utah law allows alternate forms of county government including a mayor-council form, a manager-council form or an expanded commission.

Blanding Mayor Joe Lyman did not respond to an email Thursday and an employee at Monticello Mayor Tim Young’s drug store said Young was out until Monday.

Meanwhile, people on both sides of the political divide are calling for civil dialogue.

Utah Diné Bikéyah, whose mission is to “bring healing to the people and the Earth,” said in a press release it would be willing to help facilitate a “neutral process” involving tribal leaders, leaders from the locally prominent Church of Jesus Christ of Latter-Day Saints and local residents.