Madison Hammond has had to learn to let go throughout her young life.

Growing up in a military family, she’s had to bid friends, homes and family farewell. But she never said goodbye to soccer.

“It was always soccer,” Hammond said. “Soccer was always the constant. I was always leaving other things for soccer.” 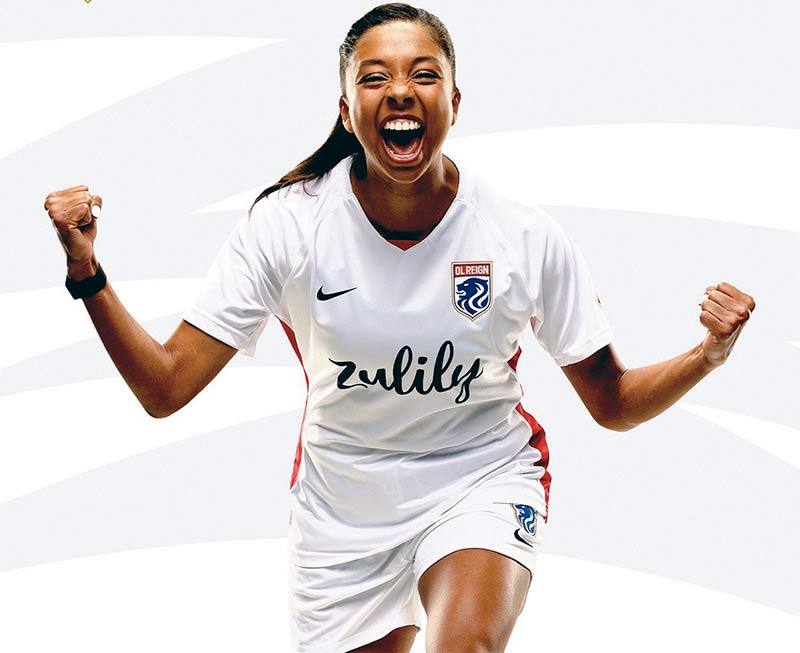 Submitted
Madison Hammond, 22, signed a contract to play for the OL Reign for the 2020 National Women’s Soccer League Challenge Cup. The Diné, San Felipe and African American pro athlete learned to play soccer while living near her San Felipe family during her adolescent years.

Gymnastics, basketball – none measured up to soccer. The deep-rooted relationship Hammond, who is Navajo, San Felipe and African American, had with soccer blossomed into an opportunity of a lifetime as she signed a professional contract last month to play for the OL Reign, part of the National Women’s Soccer League.

Shortly after a pre-season tryout earlier this year, the season was put on hold and Hammond, 22, was sent home due to the global pandemic.

She later got a call to join OL Reign for the 2020 National Women’s Soccer League Challenge Cup and was offered a contract.

Hammond, a defender on the team, said it was unexpected, especially because of how the pandemic left many things uncertain, but she was also extremely grateful.

“I’ve been really fortunate, and I’ve just been trying to enjoy the process and just get better,” she said. “I’m really excited to be here, and signing that contract was an unbelievable feeling.”

The OL Reign lost their first match in the Challenge Cup to Houston Dash, 2-0, on Saturday and played tournament host Utah Royals FC on Wednesday. They are seeded No. 8 in the league standings.

Hammond was born in Phoenix but spent some of her adolescent years in Albuquerque near her San Felipe family. It was where she learned to play soccer. She played on a start-up team and progressed to the next level as the years went by.

At about six years old, her mother, Carol Lincoln, remembers how her daughter showed soccer potential. Lincoln is a sister to former professional golfer and golf commentator Notah Begay III.

“He told me, ‘She’s going to be really good,” Lincoln said.

Hammond ended up on a boys’ team and learned to play tough. It gave her a sense of confidence.

Lincoln said those early years set her daughter up for the type of player she would become.

“I think the one thing that Madison has always had is a lot of confidence on the field,” she said. “I think that stems from being in situations where she’s had to think her way through it, and her athletic ability to get her through it.”

Once she reached middle school and high school, Hammond moved to Virginia with her mother. There she was a standout soccer player throughout her four years.

Hammond started getting looks from colleges her freshman year but it was nothing she paid much attention to until she realized college soccer might be a real option.

“I was 14 at the time and you don’t really think about soccer as something that can completely take you to new levels,” Hammond said. “In that moment I thought this really could turn into something that’d be really defining.”

Hammond said her mother played a role in making her dreams to play college and professional soccer come true. As a single parent, she took her to extra workout and training sessions.

After one year of high school, the time and effort got the attention of Wake Forest University. After a visit, Hammond felt at home.

“I fell in love with the campus instantly, made a connection with the coach,” she said. “I waited a year and signed my national letter of intent to officially commit to Wake Forest.”

At Wake, Hammond was a four-year starter. But while she thrived on the field, she faced tough experiences and self-reflection as a multicultural athlete.

“I had never experienced going to a predominately white school where people don’t understand what it meant to be black or Native,” she said. “It was really important to me because I learned to be able to talk about it more. In the end I feel that I am comfortable about it.”

Hammond decided to give the pros a shot and tried out for OL Reign but when tryouts were cut short, she was sent home.

She was one of a few who got a call from the team for tryouts and attended camp in Montana.

In her short time on the team, Hammond said she’s already learned more.

“The past six weeks have just been a total learning curve,” she said. “There are veterans who have played in world cups, have played in other countries.”

Lincoln said her daughter put in the work to earn her contract. She said she watched her go through ups and downs as she worked to get the opportunity.

“She’s kind of battled,” Lincoln said. “Nothing throughout her whole career has ever come easy to her.”

For the first time in four years and as a newly signed player, Hammond has not started a game. She said she still has much to learn.

“It hasn’t been out of a negative perspective,’ Hammond said. “I feel more inspired and I have more fire to show what I can do.”

She’s thinking about ways to build her platform as a representative of the Native American and African American communities. She said she hopes to inspire others.

“Not a lot of Native kids get to pursue my dream,” she said. “For a lot of people of color in this country they don’t get to strive for their dream.

“To see someone who looks like them but also someone who can sympathize with their experiences,” she said. “I hope to have a voice that’s big enough to encourage, to influence some kind of real change.”